"Shadowplay" concludes with "An Intimate Beheading," which completes our pre-war tale of conspiracy and connections. Once again, the script is by James Roberts and pencils are by Alex Milne, color by Josh Burcham, and lettering by Chris Mowry. And this time Juan Castro and John Wycough join Milne on inks. 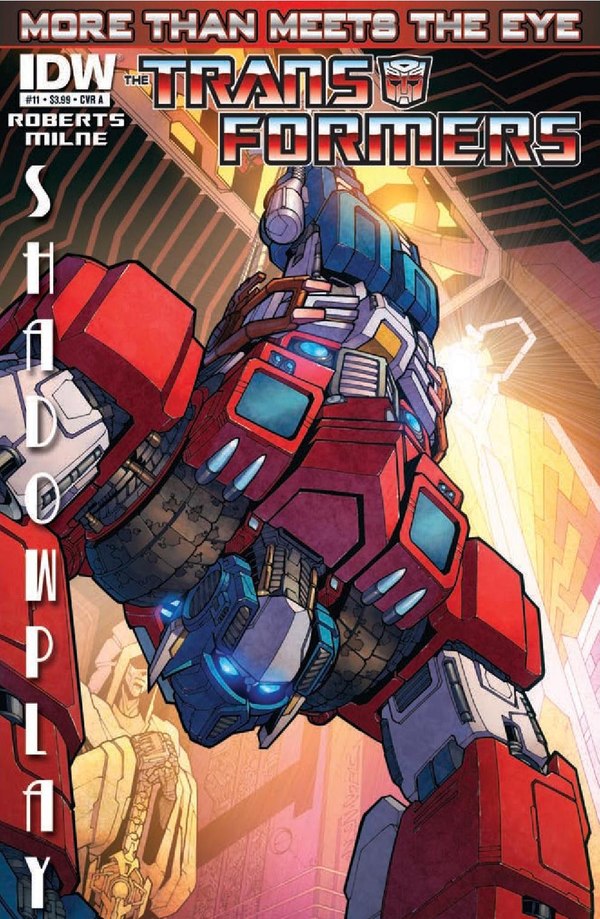 Prowl confronts Orion Pax on the plausibility of his plan, which conveniently also acts a recap of the plot up to now- and I really like that Roberts provides those. After promising his silence in exchange for Chromedome being kept out of trouble, he departs. Roller and Chromedome return with the Senator's team of "outliers" -Transformers with unusual special abilities unconnected to their alternate modes. Together, they devise a plan to remove the bomb that's been placed in the tomb of the late Nominus Prime. In the present day on the Lost Light, the identity of Red Alert's attacker is revealed, and we check in on Rung, and whether or not the storytelling session has had any effect on him. Returning to the pre-war era, we see the outcome of the plan and learn the identity of Orion Pax's senatorial benefactor.

I don't want to spoil anything about the issue, which as the conclusion to a three-part story is pretty difficult. The other difficulty being that, since I came into MTMTE and the IDW comics in general at the beginning of "Shadowplay," a lot of how this ties into the bigger picture of the history of Cybertron was lost on me. The senator's name was a fair surprise to me but from what I've read on the wiki of his history, it will probably carry all the more impact for people who've been with the comics for a long time now. Likewise I was somewhat expecting for this part of the pre-war history to be a slightly larger step in the march towards war than it ultimately turns out to be, but the real focus here is on how Orion Pax met the future Autobots and how they came to work together for the first time. Lastly, the resolution of Red Alert's situation isn't at all what I expected, but it makes perfect sense in hindsight.

As always, James Roberts' talent for character writing is the highlight here. These are stories driven by characters and their traits - and ultimately the introduction of the other Autobots during this story and their tics, along with the politics of pre-war Cybertron, all make you realize what a profoundly broken society it took to produce such an array of eccentrics, and exactly how much it took to get them all to work together. Likewise, Milne's art is every bit as strong as it's been the past two issues, and I love the entrance Pax makes near the end of the book; Milne handles action just as well as expression. Also, my compliments to inkers Castro and Wycough, as it doesn't look like a book with multiple inkers, which is to its credit. I think most longtime comics readers have probably read cbooks where multiple inkers were painfully obvious.

The end of "Shadowplay" ties into the IDW Transformers lore more strongly than I anticipated at the first issue; in a way I was hoping for something that would stand alone more effectively. But when all is said and done what we get here is a great story that is entertaining from start to finish, and one with some genuine surprises. More Than Meets The Eye is a book I intend to stick with.