Straddling the High Moon and Hub ends of the Aligned continuity, Transformers Prime: Rage of the Dinobots follows Grimlock and his team on a mission to rescue Ultra Magnus. Written by Mike Johnson and Mairghread Scott, art by Agustin Padilla, colors by Thomas Deer, and lettering by Shawn Lee. 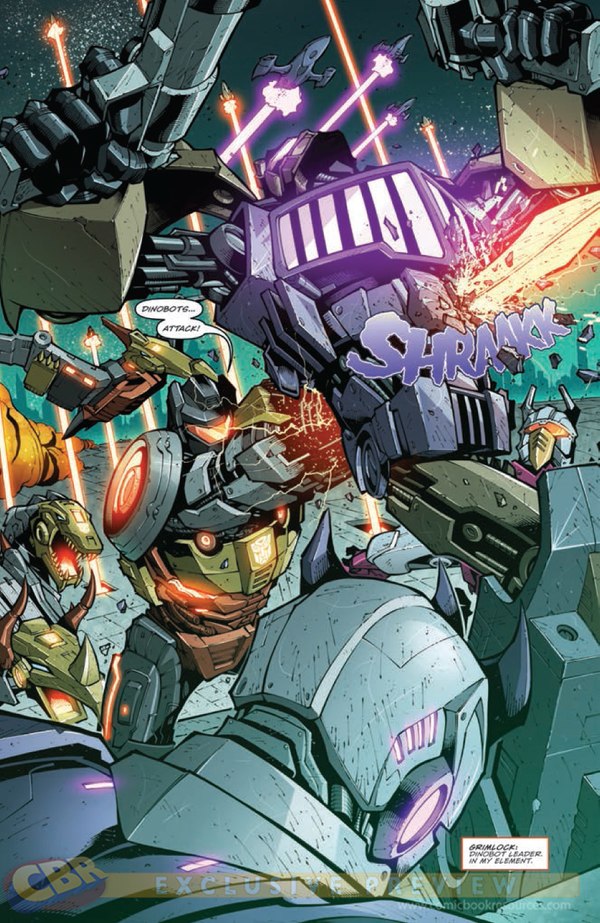 Set during the evacuation from Cybertron, we open on Grimlock and the Dinobots under the command of Ultra Magnus, covering the Autobot convoy's retreat. But despite Swoop's escort efforts, Magnus's ship is shot down. Unknown to the Dinobots, their recovery plans are being intercepted by a group of Transformers known as the Forged, who make it their priority to reach Ultra Magnus first. When Grimlock and company get there, they find the remains of a Decepticon recovery team, and the nature of the Forged - much like the Forged themselves - takes the Dinobots by surprise.

First off, it's nice to see Ultra Magnus represented considering that he's had two toys in Prime, soon to be three in the Aligned continuity in general, and almost no appearances in any of the related fiction up to now. And as much fun as the Dinobots were in Fall of Cybertron, and as big a selling point as they were, a book for them is a great idea. Like I said, Rage of the Dinobots attempts to tie together Fall of Cybertron and Transformers Prime. Naturally with Grimlock's circumstances at the end of the game this isn't going to match up perfectly- but as I've said elsewhere, I like that the Aligned continuity is merely aligned and not ironclad. The characterization of the Dinobots matches up to the game strongly, so take that as you will depending on how much you like the idea of Dinobots (and particularly Grimlock) as tortured, rage-filled lab experiments. On a related note, I'd love to see Hasbro hire an English major to sit down and draw up definitive rules for Grimlock's broken syntax- it could be inconsistent at times in FoC, but here it's barely present most of the time. In one instance it's present for maybe two out of four dialogue balloons in the same panel.

Other than that, the script has no serious problems though most of what we get this issue is setup for what's to come. Johnson previously wrote the Prime graphic novel, and Mairghread Scott is a writer for the series (who deserves a lot of credit for writing "Hurt," which actually made Miko sympathetic for once), so both have history with Transformers. The same can't be said for Agustin Padilla as far as I've been able to research, but for his first time working on the series he does a decent job of it; everyone stays pretty much on-model and the action is largely easy to follow. Thomas Deer's colors are nice and solid- Padilla's art style here works much better with solid colors and shades than it would with a more nuanced approach, and Deer gets that.

This is a good comic that I kind of feel bad for, because it's competing for attention with IDW's other TF comics, nearly all of which are the best Transformers comics in probably decades. (Possibly all of the decades but that's a discussion for another time.) But it's worth taking a look at since it fills an otherwise curiously unaddressed niche in the current Transformers lineup, that being a connection to anything going on with any other part of the brand. The setup here suggests that we may even be getting information relevant to Beast Hunters as the series goes on, so if nothing else my curiosity is piqued.