Ages ago, Thundertron swore that the creatures that caused the destruction of his homeworld would pay for their crimes. Since then, he has wandered space in search of his revenge. His ship is primed, his crew is willing, and at long last, Cybertron is within his sights.

Thundertron's an interesting candidate for a figure in the Prime line on a lot of levels: he's from a novel (Transformers: Exodus by Alex Irvine), he's the first and, so far, only member of a new faction (the Star Seekers), he's the first Beast Mode-sporting Transformer in the Prime/Robots in Disguise line, and he's the second-ever space pirate in the line, after Cybertron's Cannonball (who shows up in the book as one of Thundertron's pirates). So he's a reasonably significant toy.

Now, is he any good?

First things first: Thundertron is mistransformed in-package. You should pull down the part of the "tailcoat" attached to his back so you can push his hips together fully. Next, the two white side-panels around his face should swing down, which lets you swing out the two clear blue panels next to his head. His head is still deep-set after doing this, but at least you can tell he has one. I wish it sat higher still, because there's some really nice detail on the head you're never going to see unless you look very closely. He looks like his head is covered in bristly hair and he's wearing a pirate hat that's open in the back. I also wish the "hat" was a different color than the rest of his head, but it looks fairly decent as it is. There seems to be some kind of colored plastic inside his optics, but it's very deep set and the light-piping doesn't do much, so it makes his eyes look very dark and mean. Nice touch! 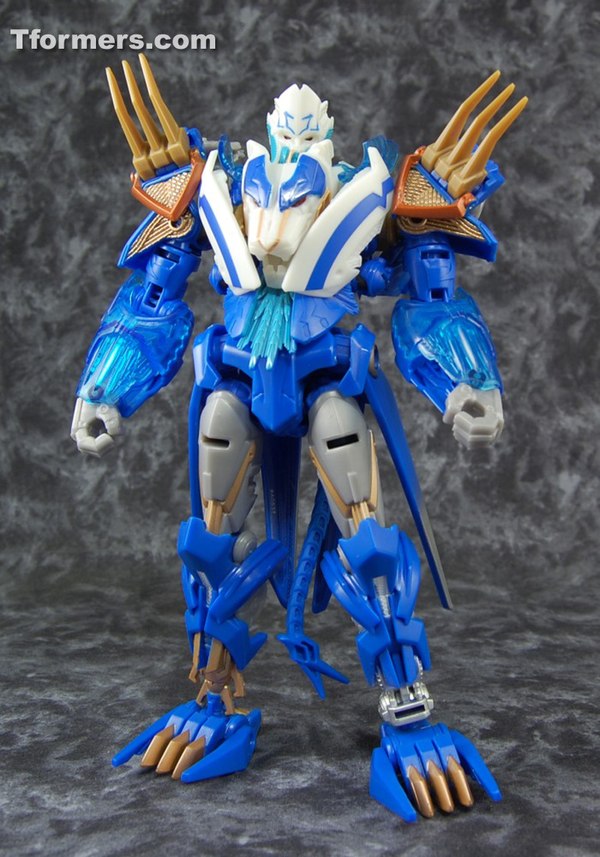 So, yes: Thundertron is a pirate, and he looks the part. The symbole of his faction, the Star Seekers, is on his skirt armor, and it strikes me as just a little bit overcomplicated compared to the classic Autobot and Decepticon symbols; this is backed up by the fact that it doesn't reproduce well on the figure. His outfit is meant to evoke a long coat, and does a decent job of it, mostly. The white lion's head is, I think, intended to look like a shirt under the coat or possibly even contrasting lapels, or both, but since his robot head is also white and blue, it looks like he's a pirate running around with just a long coat and no shirt. But of course Transformer aesthetics and human aesthetics are different things, so it's not as off-putting as it could otherwise be. He's got some copper and gold to break up the white and blue, and it helps quite a bit. Two of his lion paws wrap around his shoulders as decoration of some sort, and they interfere with the shoulder armor built into his arms. You can manuver it all around as you like, but it just feels a little unnecessary. Because he's a Prime toy he's got some clear blue plastic on his forearms to play with the light from his accessory, and I really wish he didn't. There's some nice details on there that could do with some extra paint. But on the whole he's a really good looking figure in this mode. 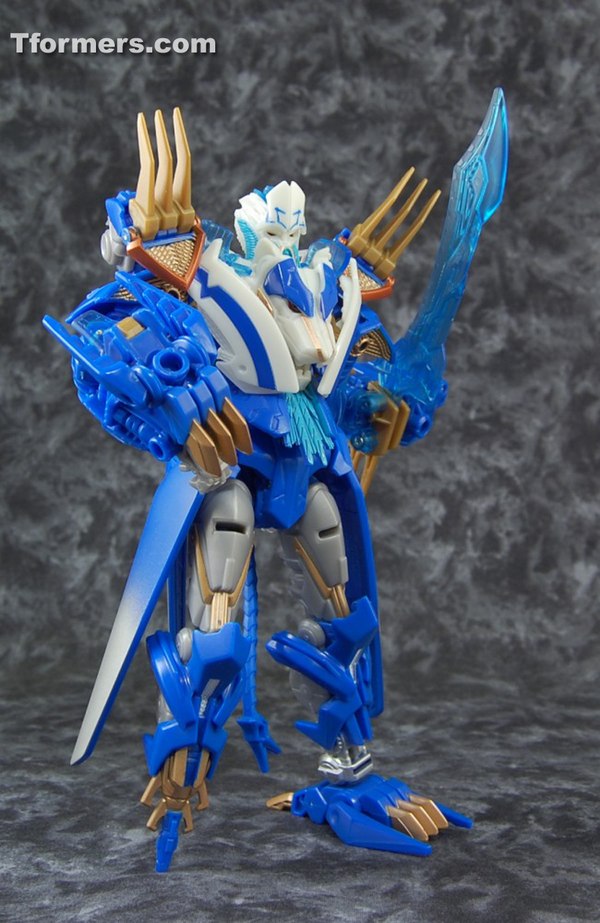 The head's on a ball-joint, but it doesn't move a lot- tilt is restricted by the shape of the head, and swivel is limited by the fact that his beard fits down into a recess of his torso. Also, the ball-joint itself is a transformation joint, and it likes to pop out of position and try to retract the head into the lion's mane. (Also, if the head pops off for some reason, you'll want to transform him halfway to Beast Mode because there's no way you'll be getting it back on in Robot Mode.) The arms are pretty good, with a shoulder that rotates fully (once you move his shoulder claw things) and swing the arm out level to his shoulder. They're also strong enough not to droop with his weapon attached to the arm, for now at least. There's also an upper-arm swivel, and an elbow that gets 90 degrees of flex. No wrists, and his hands are of the age old fist-with-5mm-socket style. They're weird looking due to being very thick, but not very deep. It's an odd combination.

No waist due to the necessities of transformation. The hips are ball-joints with a good range in all directions. The thighs do have swivels, but their shape hides them; it also means the legs can't turn inward very far, which does hurt for some action poses. Due to transformation requirements, the knee flexes to a very tight V on a single hinge- very nice! The ankles are slightly different on each side but both tilt forward and back enough to lean into a pose effectively. The left ankle is ball-jointed, so it also has some side-to-side tilt. The feet are nice and broad, and provide plenty of stability.

Of course, the reason the right ankle isn't a ball-joint is that you can remove his right foot to reveal a peg leg. The foot can then be attached to one of the 5mm sockets on the forearms as a claw weapon, which works pretty well. It's a neat addition to the figure, and because of his big feet I've had no trouble whatsoever balancing him in peg leg configuration. In fact, he's easier to pose than Ultra Magnus with his big blocky feet- but ankles (or, well, ankle) play a big part in that.

The most complex part is in arranging the robot arms and the shoulderpad claws to become the forelegs of the lion. The arms fold over backward- they click signficantly because of some nice meaty stops designed to keep the Robot Mode elbows bending in the right direction -and become only the upper legs. They don't actually connect to the paws, though those lock down acceptably to the front of the lion. The rest is pretty simple stuff: fold up the lion head and arrange the mane, slide out the hips, push the rear skirt up into the lion's back, and turn the legs around so that they bend in the correct direction to sort-of approximate a cat's rear legs. 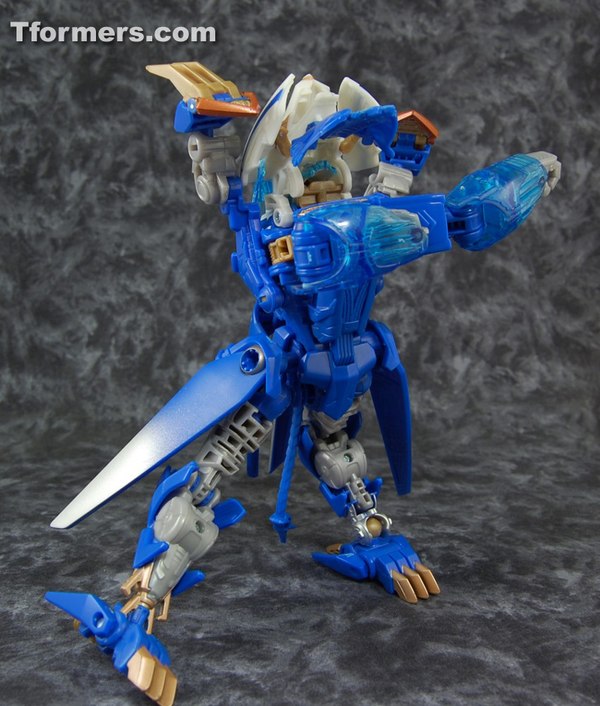 Yay for Beast Modes! That's in the abstract; this one in particular is less yay.

ExVee and I observed back during the 2008 run of Classics, with its Beast Wars figures, that Hasbro and Takara had lost the knack of doing good Beast Transformers. This doesn't do much to change my mind on that front. Thundertron is a blue and white lion and he reminds me of a Zoids Liger more than anything. Of course with cat-Transformers that's largely unavoidable, but the big fins on his flanks don't help the comparisons any. And he's proportionally weird, just to start with. His front legs seem very stubby compared to the back legs, which look too big for the rest of the figure- an effect made more pronounced by the fins. Add to that the fact that the tail starts halfway up the back, which makes the body seem even shorter than it is. As Beast Modes go, it's a mess. 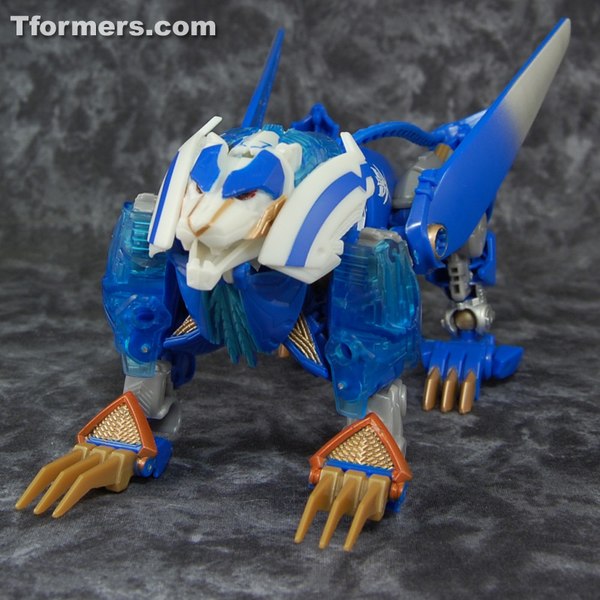 This is made worse by the level of articulation, which is nearly nil. The forelegs move a tiny, tiny amount, but move them too far and of course you ruin the illusion, since they're made of two unrelated pieces hanging out in the same approximate area. The back legs do have some articulation, and it's good that the ankles have enough range to pull it all off, more or less. But considering that the front end is largely immobile, there's only so much you can do. The jaw doesn't even move, which is a bit of an oversight on a robotic lion.

Not counting the removable foot Thundertron comes with one accessory: a large blade mounted to a block which has a 5mm peg and some sockets. The blade is definitely somewhere in the pirate spectrum; it's more similar to a falchion than a sabre or a cutlass. The overall weapon reminds me of the Gundam Exia from Gundam 00, in that you mount it to the arm and the blade points upward when at "rest." If you press down on the block, the blade swings forward to line up with the forearm, and lights up red. Unfortunately there's no way to lock the weapon into that configuration as there is with Ultra Magnus' hammer; I have no idea why Hasbro keeps leaving that feature off when it would be entirely beneficial to the toy. Of course you can put it on upside-down and cope with the block sticking out to the side.

But there are also some things you can do with the foot in order to add some play value to the sword. You can plug the foot onto the weapon and use the swiveling sidepanels to hold the weapon in deployed mode, which works pretty well. Or you can plug the weapon into the ankle socket and make a rough approximation of a real sword with a handle and everything. The blade and the "handle" don't quite align fully, unfortunately, but considering this is a probably-unintended feature, it's not exactly a surprise. I do say "probably" because there's a notch in the weapon where the foot's peg ends up resting that looks like it was practically made for it. But this may just be a case of seeing what I want to see. 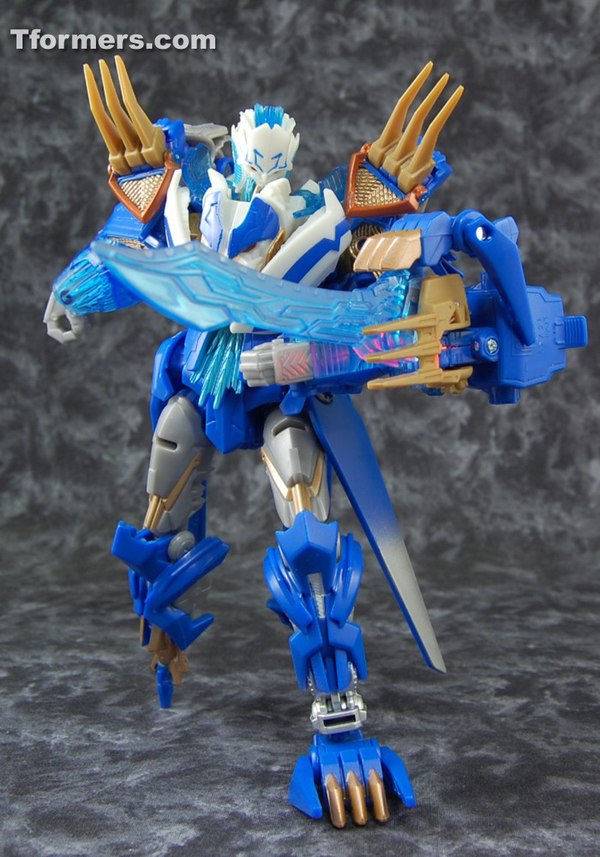 Thundertron is a Good figure on the Figurereviews.com Non-Numeric Rating Scale. He looks great in Robot Mode and, outside of the weird shoulderpads, doesn't have any major problems with his articulation. The transformation is okay, but the Beast Mode looks really wonky. The weapon is what it is; it's usable but could have used a locking mechanism. I still recommend the figure, but I don't think you're going to want to have him in Beast Mode very often.

This mold is also going to be used for a Transformers United Leo Prime, but it still seems to use this pirate head, which doesn't strike as quite right for a Leo Prime/Lioconvoy. Also, personally, I wouldn't want to pay Takara prices for this figure - at $20 or so it's a really nice figure in Robot Mode, but for $50 I'd expect more than that. Beyond which, Thundertron is the version which is explicitly a space pirate with an optional peg leg, and that is half the figure's charm right there. 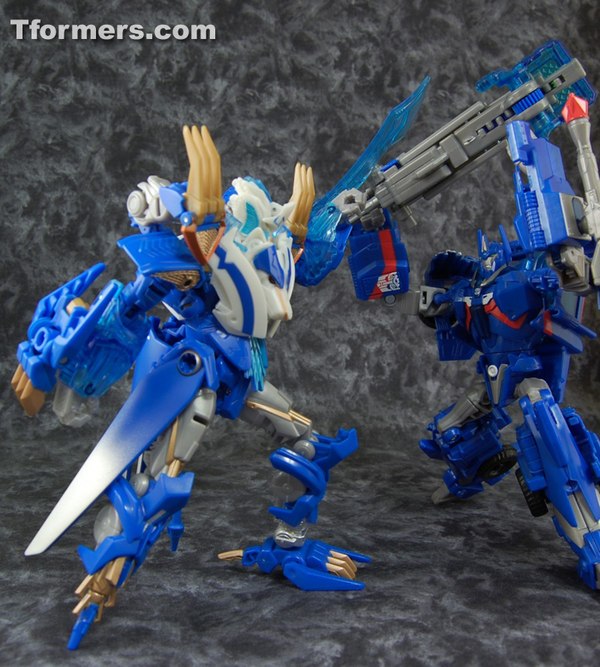