After a lengthy hiatus, Transformers: Spotlight returns. Very much like the recently concluded storyline from More Than Meets The Eye, we're treated to another Young Orion Pax Adventure set millions of years ago. (and a flashback to earlier that afternoon.) Story by James Roberts, Pencils by Steve Kurth with inks by Juan Castro and colors by J. Aburtov and Graphikslava. 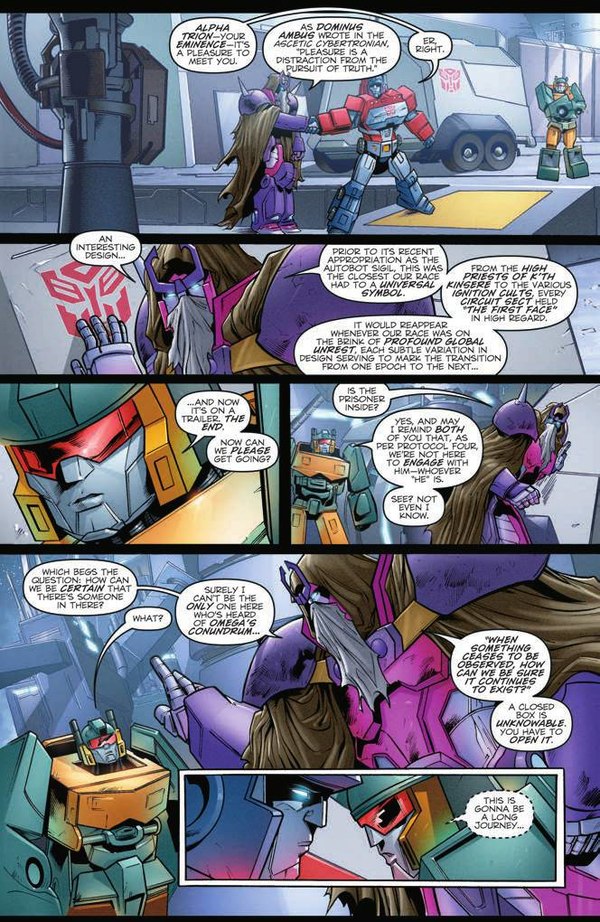 When you're older than recorded history, you tend to have a lot of time to think about stuff like this.

Set before Autocracy, the issue opens with Pax tied to the hull of a speeding shuttle. ...and cue flashback! Spotlight: Orion Pax tells another story of Orion's younger days, this time as he's tasked with exchanging prisoners with the Decepticons. Like any good adventure story, Pax gets a crack team backing him up: Nightbeat, the negotiator, Alpha Trion, the guide and philosopher, and the mysterious prisoner in the sealed transport container. What's fun here - and was so in MTMTE's flashbacks - is the young Orion Pax. When compared with Stoic War Veteran Orion Pax from the RID sidestory, I'm so happy to keep seeing this kind of Pax, who's more in the action hero model. It's so much more entertaining than the currently held standard that Optimus Prime has to be concerned all the time no matter what.

This Spotlight has the clear fingerprints of James Roberts on it without even paying attention to the Story credit. Anyone who's been reading More Than Meets The Eye over the past year - and if you're not, shame on you - will be able to immediately recognize not only the flow of dialogue but the construction of the story that manages to pack so much in a relatively short space. Having the opportunity to do a story that's both isolated chronologically within the continuity as well as not having to be fit in a regular series run seems to really have been a benefit above and beyond what I normally expect. Roberts' writing on MTMTE was what got me paying real attention to IDW's books to start with, and I would love to see him on more one-shot projects like this.

The art was not quite as glowingly positive as the writing, but scene layouts and action sequences were pretty easy to follow, which is probably the most important element. And while the coloring on the large part worked fine, one problem was Nightbeat's coloration for the majority of the book. He was shifted so far in to green as not to even come across as Nightbeat anymore. Doubly strange since in his first appearance within the book, he was a lot more blue, but all subsequent panels use green as the main body coloring. The color combination actually made me think of Hoist more readily than Nightbeat. But, if I have to fall back on that as the only serious complaint with the entire book, that sounds like a solid win to me. The short form version here is if you want a taste of the awesome stuff the IDW books are putting out there lately without having to worry about active storylines, this book will be perfect. It's a great introduction to what IDW Transformers books are about right now. But be prepared for the introduction to become a gateway; it probably won't take long before you're like the rest of us and anxiously counting the days before the next publication.