Megatron returns from the wastelands of Cybertron, and manages to make things worse just by existing in "City On Fire," written by John Barber with art by Andrew Griffith, colors by Josh Perez and lettering by Shawn Lee. 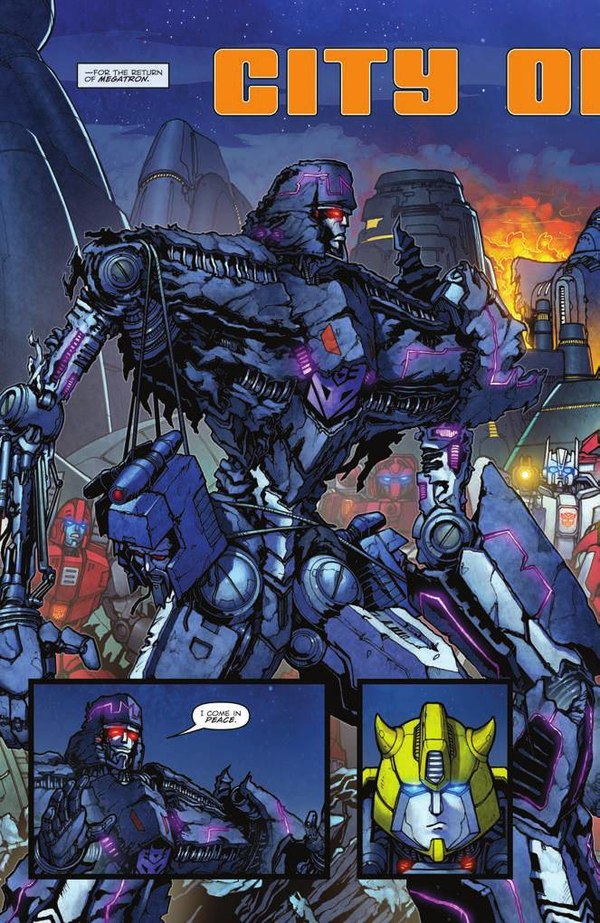 The issue is told from Wheeljack's perspective. As he examines Prowl in the aftermath of the Decepticon pen explosion last issue, Starscream arrives to deliver the bad news: Megatron is back. Despite the former Decepticon leader's injuries and his claim of coming in peace, Bumblebee orders the Autobots to kill Megatron, interrupted only by Needlenose's claims that Megatron is a returning hero who was last seen trying to save the planet. Tensions are already high after the deaths of the Decepticons who lived in the pen, and the return of Megatron is only making things worse. Bumblebee and Metalhawk are certain that there's someone trying to reignite the war, and Starscream is the most likely suspect. But since the Decepticons see Starscream as a collaborator he holds no sway over them, and surprisingly Starscream is actually hurt by the idea that Metalhawk distrusts him to that degree. When Wheeljack gets back to the lab, Prowl's body has disappeared, so he goes out into the city full of rioting Decepticons to look for him...

This is turning out better than I expected from the end of last issue; I should've had more faith in John Barber's abilities. While I'd been afraid that we were going to go right back to the war- and it sure looks like war is on the horizon -we're not just dropping right back into it because the situation isn't that simple. Instead, we're continuing to focus on the political tensions that are pushing the Transformers in that direction. It's interesting to see who wants the war and who doesn't, and it's not as simple as Autobot and Decepticon, which I like. Megatron doesn't get a lot of chance to talk in this issue, and I'm looking forward to seeing what he ultimately does want. I don't think it's going to be as simple as a new body and new troops to command.

In terms of fun factor I think James Roberts' MTMTE work has a slight edge over John Barber, but that's because the situation on the Lost Light is actually far less tense than that of Cybertron- the heavier mood here is entirely appropriate. The characters here have clear motivations and good characterization, and they're the ones driving the plot, which is how good writing works. Andrew Griffith's artwork is a little bit more rigid and more detailed than Alex Milne, and honestly I once again prefer Milne's light touch, but there's a difference between personal preferences and what is objectively good or bad. Griffith is undeniably an extremely talented artist, and the heavier style fits the heavier story. Josh Perez's colors are excellent and fit the art and the story perfectly. Each location in the story has its own lighting and its own mood, and as with the rest of the book it's very, very well done.

While this story is a continuation of what's been happening this entire year, we're essentially at the beginning of a new character arc. There's a lot going on here, and it seems like very soon everyone's schemes are going to come to a head. It's not going to be pretty, but it's going to continue to make for some really compelling comics. If you'd ever told me I'd enjoy a comic about Robot Politics this much I'd never have believed you - but between this and More Than Meets The Eye, this is undeniably the best year for Transformers comics there has ever been.