Release Data: Released in the United States in December 2012 at a retail price of US$14.99

Sideswipe could have been a legend. Before the war, he was an up-and-comer, sought after in half the racing circuits on Cybertron. But his reckless nature and win-at-all-costs attitude washed him out of every league he joined. He's in with the Autobots for a chance at redemption, and a chance to bring back the Cybertron he remembers.

"Pre-mold" replacement parts as part of a figure's initial tooling has been a thing since 2008 when it was developed to make Universe Sunstreaker and Sideswipe possible. Though since then its use has seen expansion beyond simply getting more heads to use, FOC Sideswipe may be the craziest example of the practice yet. 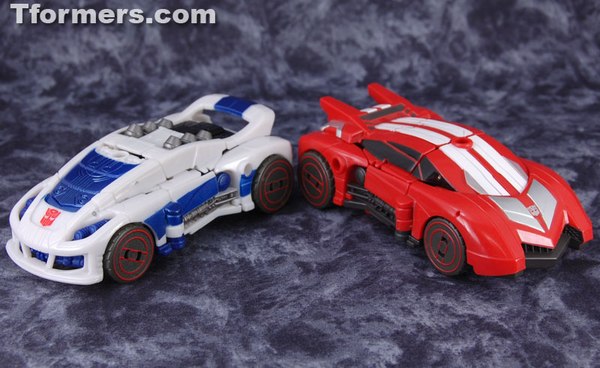 Sideswipe is based on the Jazz body. Except pretty much all the vehicle shell panels - easily a third of the toy's plastic mass - is exchanged for a new set to create a figure that is significantly different looking in robot mode. To a limited extent the result seems like what might happen if one took the movie Sideswipe design and applied the broad strokes to a more G1-friendly application. The overall body shape is similar, and the protruding hood chest instead of flat really gives a sense of that style. Even the false wheels in the ankles that were pre-existing kind of call back to movie Sideswipe's ridiculously impractical wheel feet.

I felt Jazz was the weak end of the initial Fall of Cybertron wave, and while Sideswipe doesn't change any of the engineering, some flaws have been smoothed over with the new body shell. The torso as the major example feels more solid and filled in than was the case with Jazz because the new hood piece is bulkier and leaves fewer gaps obviously visible. It serves to mitigate the appearance of the head floating on a platform within the torso cavity in much the same way. That alone is a major step forward from the design problems observed with Jazz. The flip side of that is the chest seems overly bulky compared to the proportions of the robot mode otherwise. But I think I can live with that easier than a torso that visibly is more theoretical than material. Sideswipe's new head is definitely Sideswipe, although as goes with a lot of the game-based face sculpts, it has unpleasant lines and contours that may have served to increase surface detail in the game models, but translate poorly to plastic. Worsening the situation are the unpainted eyes, cast in dark grey plastic. At best Sideswipe might be asleep. At worst he appears to have vast empty chasms within his skull which he seeks to fill by consuming the souls of the innocent. The head is glued together, so while the eye surfaces appear to be separate from the surrounding face, getting them out to fix this cleanly is gonna be a chore. 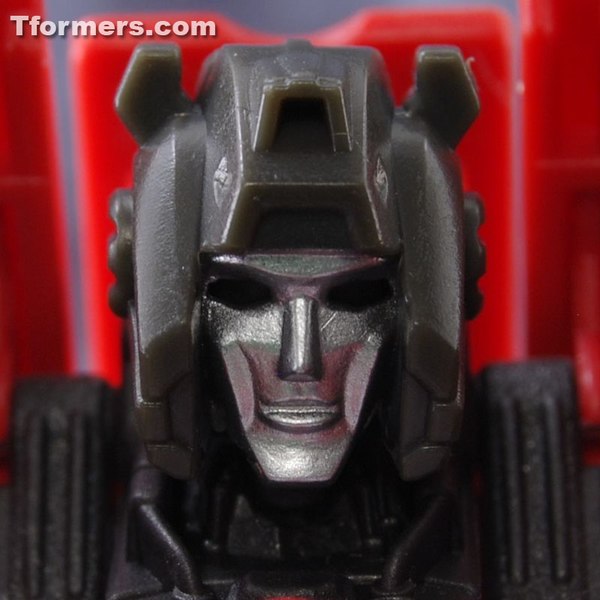 Upper body poseability for this body type is pretty good. The shoulders can be made to raise out greater than 90 degrees, and forward and backward movement is very free. The elbows are just average single hinge type joints, but they do what's required of them at least. The thing that always hurt the mold in my eyes was the leg articulation. It starts with the legs seeming to be set too close together - another factor making the upper body look oversized. The legs also appear like straight, rigid blocks. There's no sense of freedom of movement in the styling like seems to be natural in most every other modern Transformer. There's a thigh swivel, but the square build of the leg renders it utterly useless. Likewise, a swivel exists at the top of the knee joint, but it can't do anything because of the leg shape. The knees themselves are nothing special, but at least perform their job correctly, so that's at least one thing that went right here. The ankle joints might as well not be except for serving transformation, since they contribute almost nothing to the figure's ability to pose. If any case existed for the necessity of tilting ankles, this is definitely it.