Release Data: Released in the United States in December 2012 at a retail price of US$14.99

Not even the long war for Cybertron has robbed Air Raid of the joy he takes in simply hovering around, enjoying the scenery. He's a terrible gunner - distracted as he is by the natural beauty of the world around him - but he makes up for it by filling the air with flak, making it impossible for enemy aircraft to advance.

It's kind of clear just reading the bio there that Air Raid was never the intended name for this figure. Indeed, when first revealed at Botcon 2012, it was solicited as Fireflight. But by SDCC, it had been renamed seemingly for trademark reasons. It's also plain in the new head sculpt that is distinctly that of Fireflight.

I'm sure it was a bit of a challenge to decide on how to redeco the Shockwave mold. There's very few clear historic choices. Sixshot is an option, at least according to Transformers Energon. (that might be a bad example) Animated introduced the dual-identity as Longarm, and I can't even remember who shared mold with Shockwave in Alternators. However it came to be that they applied an Aerialbot identity to the mold, it's probably not what I would have thought of. Really, over the intervening months, I've taken a liking to the idea of this as a body for the Technobot Scattershot. The whole thing about having attributes of flying cannon. Even if that wasn't in common, the name suits this mold anyway. 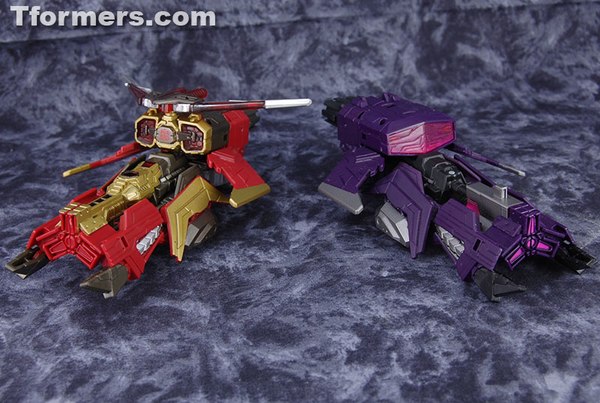 The Shockwave mold gets a new chest piece and head. The chest is fairly generic looking and probably just strives to not be Shockwave's distinctive flat pink panel, which it does a good job of. Between that and the new Aerialbotesque head, it's not really as obviously a modified Shockwave as you'd probably think. Helping more with that is the much more varied coloration. The robot mode is split pretty evenly among red, silver, and dark grey, with just a bit of gold trim. The color variation does wonders to give the toy more of its own identity on the same body. Where Shockwave was very homogeneous looking, Air Raid looks a lot more structurally complex. Lots of the sculpted detailing on the lower torso is painted up in silver which really brings out the overlapping panels and accentuates the feeling of robotic anatomical structure. That whole "living machines" thing again, y'know? 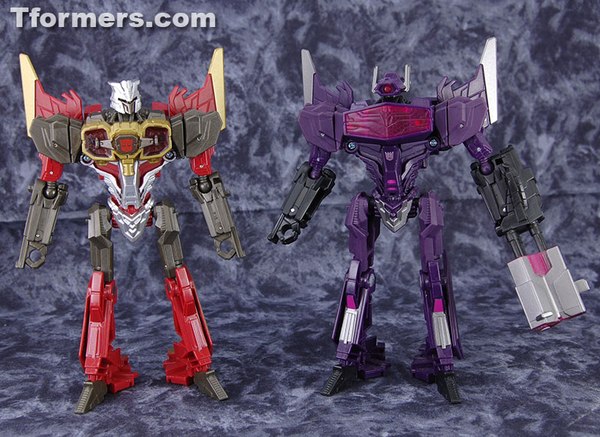 There's something I really like about the styling of the new head that I can't quite place. It's very angular and detailed, with the eye slit between the helmet and faceplate being really narrow. There is functional lightpiping, but it takes a strong light source. The outcome is really nice though, since the bridge of the "nose" is painted, so you get the effect of separate glowing eyes from within the shadows of the helmet. It's a great effect, though between the styling and the red plastic used, it looks just a bit evil for a character that's supposed to be an Autobot. 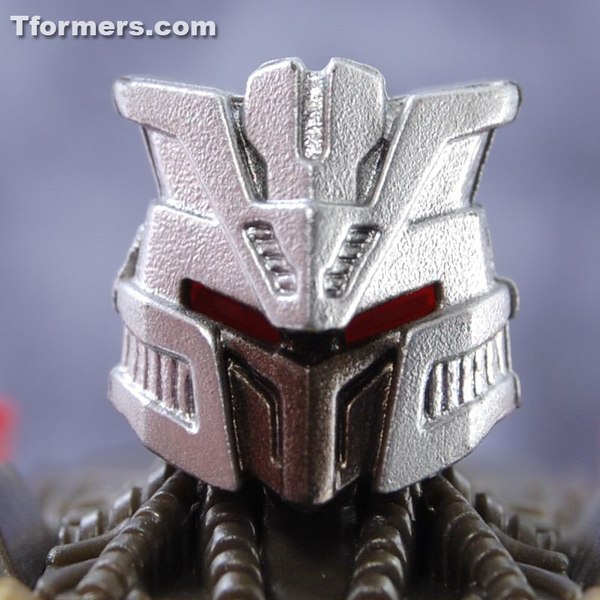 Functionally, everything works the same as with Shockwave. Good articulation in the arms, not so much in the legs, but that had to be a concession to make the transformation work as much as anything else. It's still a little bit hard to find the leg posture that lets the figure stand easily, and I could swear the toes stop at a slightly more doward pointed position than happened with Shockwave, but you can still find the sweet spot in there and then have no trouble getting Air Raid standing or posed. It remains a solid, if slightly basic action figure - and looks more interesting in the process!

Unfortunately, parts fit on Air Raid is generally a lot poorer than was so with Shockwave. Most of the important fittings have tightened to being almost unusable, especially folding back and tabbing the shoulders together to form the drive section. I have not been able to make that correctly happen so far, but the joints in the arms help you at least to fake it for the sake of vehicle appearance. Fitting the legs together for vehicle mode also caused a stress mark, but hopefully with that one out of the way, the plastic is relaxed enough to not need to go any farther. I can tell you it didn't relax me very much, though! 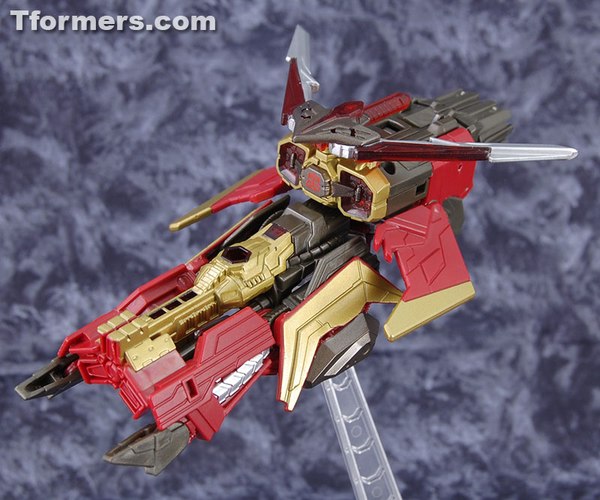 One problem right off the bat is the integrated weapon component in the forward section. Shockwave had that tab in to the sides of the inner surfaces, which stabilized everything. Air Raid doesn't have that benefit, so the weapon is really really easy to push out of the slot holding it up. Subsequently trying Shockwave's weapon in there which can tab in front proves how much it really needed that extra support on the other end and the vehicle is weakened for not having it. A secondary problem of the changed weapon has the large sword blade kind of forming a keel under the vehicle and preventing it from resting level on a flat surface. It's more of an irritation than anything else, but like the absence of stabilizing tabs in front, it feels like a case of not fully considering how the remade weapon would need to interact with the vehicle mode.

In functional terms the vehicle is not otherwise very different at all. The new chest piece is there, though the Autobot symbol is now upside-down. Oops. Air Raid is mostly red and gold now, a little Iron Man-ish, in fact. It's more visually interesting than the sea of purple occasionally interrupted by bands of silver, much as it was for the greater range of colors in robot mode. There's a peg on top of the vehicle where the sword accessory can be attached which helps change up the vehicle mode a little more. The alternate result of this is that Air Raid might be able to be utilized as a rifle for Bruticus or more appropriately Ruination after the next wave hits. Or with most of the new weapon accessories this wave having 5mm holes in addition to various pegs, you could mount alternative weaponry to Air Raid's vehicle mode. It's not as satisfying somehow as the C-clip "Miyake Joint" accessories were in this application, but I'm liking the renewed sense of intercompatible arsenals the Fall of Cybertron line is moving towards now. 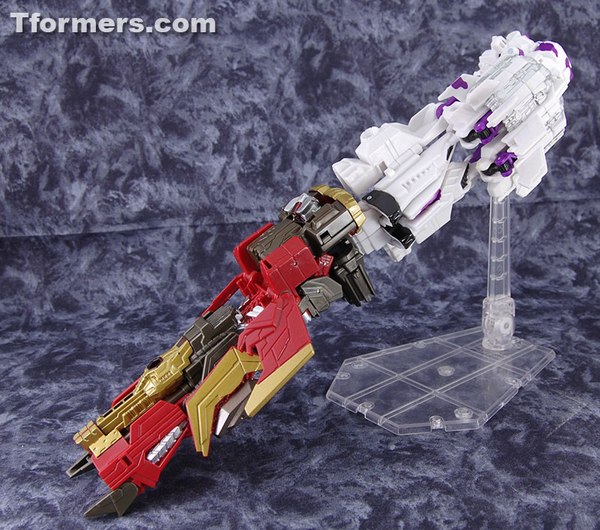 Air Raid uses part of Shockwave's weaponry still, in this case the underlying rifle to which the major appliances are attached. Air Raid's version loses one barrel for necessary connection points, and primarily replaces the cannon end with a sword thing. It's actually really impractical to use this part of the weapon by itself. The blade extended, the whole thing becomes too long for the figure to really utilize for good posing, and can only be carried at awkward angles. You can clip it to Air Raid's arm and fold the blade away and it is a pretty great looking rifle, but you have to lose elbow articulation by turning the forearm to the side to keep the blade from jabbing the figure's torso. The blade and gold part of the gun split from the base rifle, and this piece has its own 5mm peg so it can be held as a rifle, which works slightly more easily than keeping it all arm-mounted together and it's still a really nice hand gun. 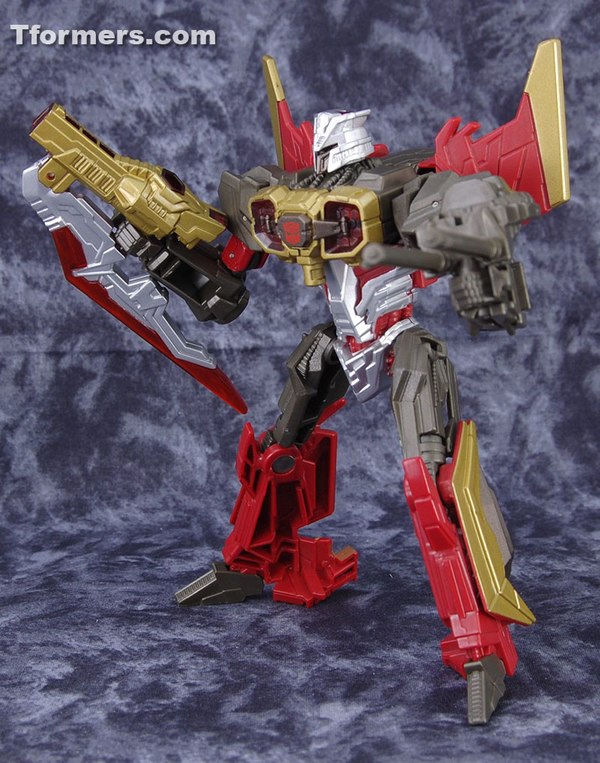 Air Raid also has a sword based on one that Megatron uses in Fall of Cybertron, which is clear when you look at the hilt and see the stylized Decepticon insignia incorporated in to it. I have no idea if it was a feature in the game, but the sword can split open lengthwise like scissors, and the halves can fold backward for attachment in vehicle mode. It's a relatively simple designed sword, but it has a nice look. It'd make a pretty good general use weapon if you want to just give someone with 5mm hands a sword. Or scissors!

The sword and large blade thing can combine together to form some weird triple-blade weapon that looks ridiculously impractical. One concern I have is the connection between them being clear plastic on clear plastic. That's asking for something to crack sooner or later. I'm liking using the double barrel rifle as a bridge between the pieces. It's not exactly the right way to do it, and the connection is not as solid as doing it directly, but at the same time the process feels safer. Also, the big sword then gets a full hand guard as well as using all of the included weapon parts for the super form, just like with Ultra Magnus. 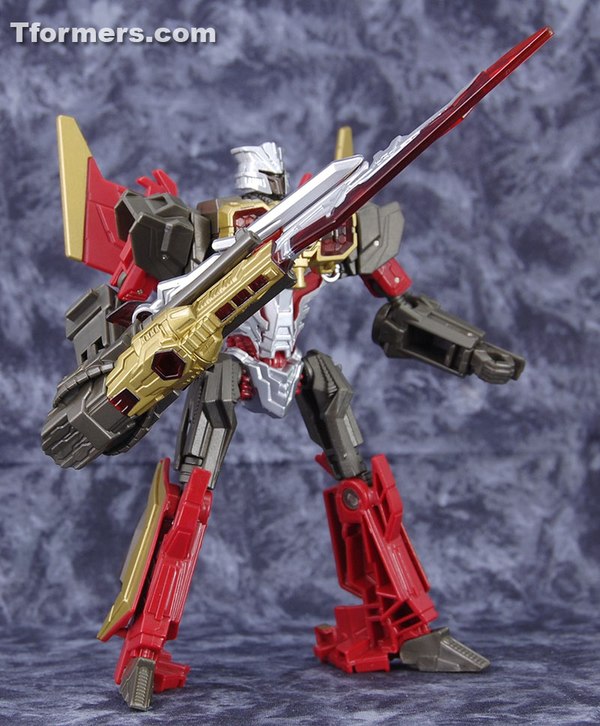 It's definitely the weakest weapon upgrade in the wave, but that seems like a problem of how it had to rely on using parts already made to fulfill specific roles in the vehicle form, where no such consideration had to be taken for Magnus or Sideswipe. It's a decent attempt, though, and it does provide a couple of nice sub-weapons in the deal, so it's not a total wash.

So, which of the two to get? Shockwave, probably. If it is not a concern to you to specifically include a Shockwave in your collection however, Air Raid offers a better deco, and more accessories to help meet dollar value. It's not all a numbers game, and even though for $15 every extra bit of plastic can be a strong selling point, Shockwave is just put together a little bit better and is probably the superior overall Transformer between the two releases, while Air Raid wins on visual interest and parts count. Please choose according to what suits your needs best.

Air Raid can squeeze by at Good on the Figurereviews.com Non-Numeric Rating Scale. Honestly, if the vehicle mode fit together a little better, and the sword accessories were just a little better realized, it very easily could have surpassed Shockwave's original Very Good score. Apparently there was only room for one really awesome Compound Sword in this assortment, and Magnus got there first. 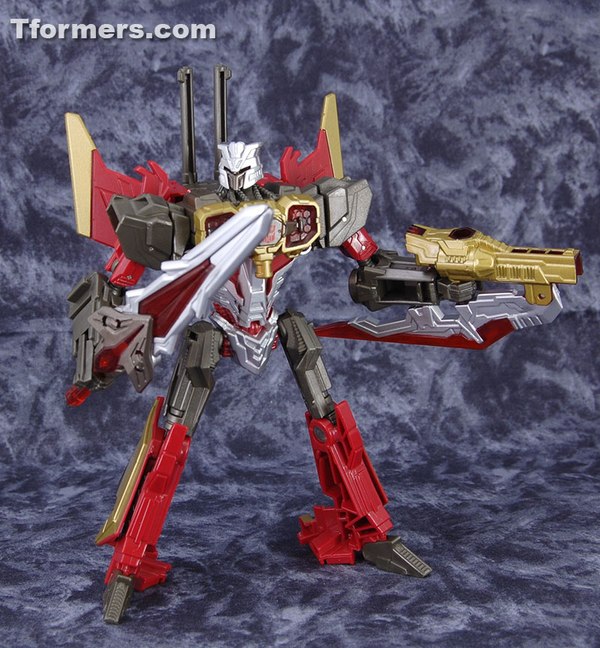