After some intel-gathering and realizations, the Dinobots decide it's time for a jailbreak in Rage of the Dinobots #2. Written by Mike Johnson and Mairghread Scott, art by Agustin Padilla, colors by Thomas Deer, and lettering by Shawn Lee. 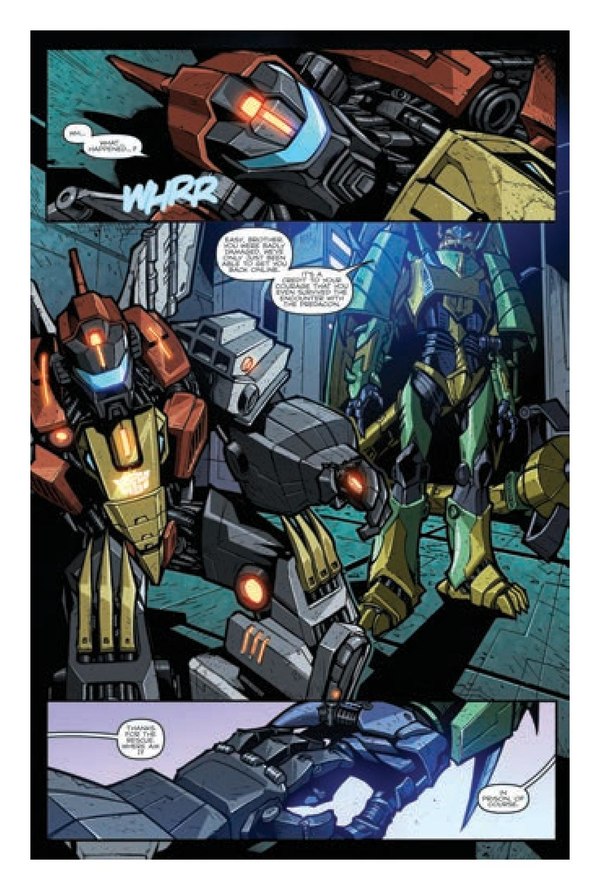 While investigating Ultra Magnus' shuttle following last issue's Predacon battle, Sludge discovers that one of the bodies has been altered- much as the Dinobots themselves were altered. From this information and Swoop's location in one of Shockwave's abandoned bases, Grimlock intuits that the Forged are real, and this is their prison. Swoop awakens in said prison and is greeted by Ser-Ket, who seems to be Shockwave's second in command. The Dinobots break into the prison, free all the prisoners and go after Ultra Magnus, but there's still the matter of finding Swoop...

First off, the big revelation I gleaned from this issue is mostly accidental: the character of Ser-Ket is Ripclaw, the Beast Hunters figure we learned about accidentally last week. She doesn't seem to have the claw yet, but we've got two issues left to go. Worst part is that I didn't put it together until Magnus refers to Ser-Ket as female. This seems to me, coupled with the brief preview of Beast Hunters from NYCC, to suggest Shockwave's going to be central to the Beast Hunters phase of Transformers Prime. That suggests some possible directions for the show I'd be pleased with, and we'll see what greater implications this comic may have on the new season.

Other than that surprise, the issue is pretty much more of the same we got last time: the writing works despite Grimlock's speech impediment still coming and going. I have to say again that I'm spoiled by IDW-verse books, though, as I feel like there could be a lot more character coming through for everyone. The characters who display the most personality, Grimlock and Ultra Magnus, are building on 30 years of established characterization with nothing really new added. Grimlock's anger-management stemming from his modification by Shockwave is new... as of Fall of Cybertron, so still somebody else's work. It's decent, plot-advancing work, but it doesn't stand out.

Agustin Padilla's art remains easy to follow and well laid-out, but I feel as though he may have been rushed to finish this issue. There are more than a few panels where the angles of the heads are just slightly off- between odd angles and copious neck cables, one of the Grimlock closeups reminded me of Manny Galan's G2 artwork. I'd also like to see the full scope of the prison break- after the establishing shot of the size of the prison, the few panels we get of the riot only show a sliver of the action. But again, his layouts are strong and his action scenes aren't difficult to follow at all, which are qualities that shouldn't be underestimated. Thomas Deer's coloring remains clean and help smooth over scene changes very nicely. While it was already known that Rage of the Dinobots was going to tie into Beast Hunters, it's nice to see some concrete tying-in happening here, even if we weren't supposed to know about it yet. We've established the major players in this comic and what their roles are, so next I'm hoping to see how those roles take them into Transformers Prime- as well as a little more of who they are, exactly.