As Iacon burns and the Autobots struggle against the rioting Decepticons, Prowl's plans come to light - and fruition. "The Verge" is written by John Barber with art by Andrew Griffith, colors by Josh Perez and lettering by Shawn Lee. 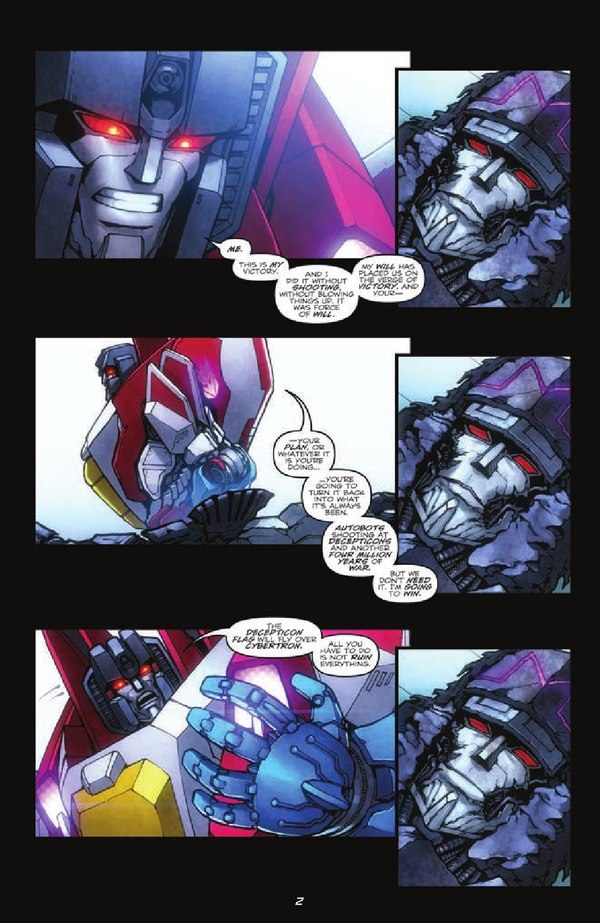 And now Starscream freaks out.

While barricaded in the prison, Starscream has a chat with the comatose Megatron, telling him that Starscream can unite Cybertron under the Decepticons without another four million years of war if only Megatron doesn't ruin it with whatever he's planning. The comatose Megatron smiles, and Starscream panics. But that's the least of his worries: he's trapped in a prison with three Autobot guards, and the Decepticons are besieging the prison. Elsewhere, the very-much-alive and upgraded Prowl restrains the rioters that were about to kill Wheeljack last issue, and promises Wheeljack answers if he comes with him to the Black Room. At Maccadams', Arcee arrives with Dirge, who is convinced to go with Blurr and tell Bumblebee the truth about Prowl's murder of Bombshell. At the capital, Bumblebee and Metalhawk talk about the situation and, realizing that the NAILs still outnumber the Decepticons, Metalhawk flies off to try to calm the unaffiliated population of Cybertron. Meanwhile back at the prison, Jetfire, Warpath, Bluestreak and Starscream prepare for a final stand in the siege on the prison. But some are more prepared than others.

For the sake of spoilers, I'm having to leave out the most important part of the issue. But by the time it's over we have a pretty good idea of what Prowl's been doing, if not why. I suppose that'll come next issue. And we also get to see that Starscream was basically right: Megatron does have a plan, and if he succeeds, it will ruin everything. Otherwise, this is definitely a middle issue of a story arc, and it shows. We get some explanation of what has come before, but largely it just raises more questions.

But it's the hallmark of good writing that everything that everyone is doing makes sense for their character, from Starscream's indecision to Prowl's plan, and so on. Unlike some multipart stories I've found myself in the middle of, I have full faith that John Barber will get us through to the end in a way that will make sense and be satisfying, and hopefully not what it looks like is going to happen judging from the end of this installment. Andrew Griffith and Josh Perez remain excellent, producing detailed work with solid and expressive characters. Whenever I use "solid" to describe artwork I mean it not in the sense of damning with faint praise, but as one of the highest compliments I can give: things look real, believable, with a sense of mass and substance. In other words, solid. But also, Griffith does a pretty great job with faces in this issue, producing some great shots like Megatron's subtle, unsettling smile.

This storyline is going to determine the direction of the book for a long time to come, and despite how things look at the end of the issue, I have no idea what's going to happen next. All I know is: it's going to be a long month.