As Scorponok sets his plan in motion, a familiar face appears to the robotomized Starscream on Earth in "Natural Selection Part Two." Simon Furman scripts, the penciling and inking team remains Andrew Wildman and Stephen Baskerville, John-Paul Bove colors, and Chris Mowry is still on lettering. 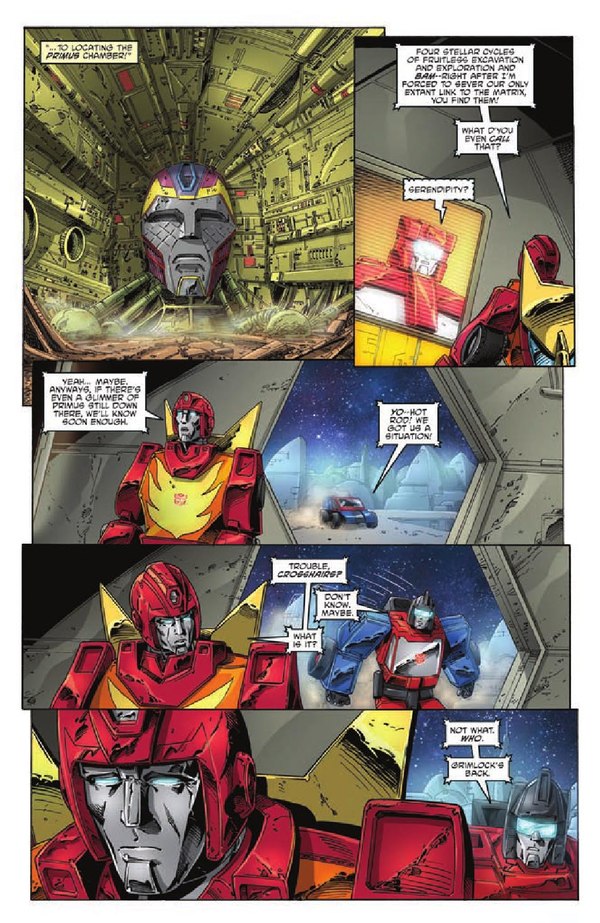 He's not even a Prime yet, and he's already tired and glum!

On Nebulos, Scorponok tinkers with the CNA of Highbrow, Brainstorm, and Hardhead... who decide to flaunt their new Decepticonhood by taking it out on Grimlock. Grimlock, fully restored, converts to Dino Mode and illustrates just how smart a plan that really was. But then Scorponok intervenes, and it's time to go to Cybertron, where Hot Rod is informed that the excavation crew may have found a route to the Primus Chamber. Grimlock's return puts a damper on that, and they wrestle him into a cell to discover how he's returned to a fully functional state. On Earth Starscream, living but unable to speak, is discovered by none other than Galvatron, who demands to know the secret of the Ark. Optimus Prime informs Ultra Magnus that he's staying on Earth despite the wishes of the humans to find some way to atone for his actions and inactions. Back on Cybertron, Hot Rod goes down into the Primus tunnel as Perceptor interviews Grimlock. A small chamber opens in Grimlock's leg, revealing...

So apparently Transformers are like possessed Krusty the Clown dolls, in that they can be switched from Good to Evil. I'm not sure how I feel about the way this is being handled. Scorponok speaks of allegiance to the Autobots or Decepticons not being a black and white issue, but the Autobots who have been switched to Evil immediately attack Grimlock for being a "weak-socketed Autobot sympathizer." Mixed message ahoy! If there is some nuance and a greater point about what makes an Autobot an Autobot or a Decepticon a Decepticon, I'd like to begin to see it. As it stands, I'm not thrilled with the idea that some robots are just born evil and that you can manipulate their DNACNA to make them evil. Also: I know this is nitpicky, but seeing as this is picking up from a 1980s comic series, I wish Furman would leave Sparks out of it. I know that the concept of Transformer "souls" has become absolutely central to the concept since Beast Wars, and it's difficult to go back, but I look at continuation projects like this as something like a period piece. If you're going to pick up where you left off, try and do it the way you'd have done it then.

On the other hand, Optimus Prime's self-imposed exile works for the character, in my opinion. This is the Optimus Prime who killed himself for hurting imaginary people, after all, and I'd say this is a decision well in keeping with that- though at least he had the wisdom not to blow himself up this time. Beyond that, there is some fun stuff in this issue. There's some decent action dialogue, which Furman was always quite good at, and one decent if morbid gag, which Furman was also always good at. ("Nope. Hasn't got the knack.") Wildman and Baskerville are doing their usual good job here, and while I've mentioned before that their human-faces-dipped-in-metal approach to Transformers isn't my favorite, you can't argue with the expressiveness it brings to the characters. Hot Rod's gloomy expression when informed of Grimlock's return is a personal favorite. John-Paul Bove's coloring remains modern and streamlined, but the MacGuffin in Grimlock's leg puts this to particularly good use. Again, I'd like this to be more in the old style in many ways- because really, if it's not, what's the point? -but that's not an effect you could've done on newsprint. Speaking of the old style, while Geoff Senior is apparently no longer providing an alternate cover, we've still got Guido, and Guido is great. He really puts the point on the "period piece" issue I have with ReGen One, because his cover is totally a Marvel G1 cover, from composition to coloration. Guido gets it, and I'm not sure anyone else on the book does.

Scorponok's plan is underway, and he (and Simon Furman) clearly have a point to make about genetics and morality. What that point is and how far he(Scorponok) will get with it remains to be seen, but Hot Rod's going to have his hands full for the foreseeable future.