Millions of years ago, Thundercracker doubts himself and his place in the Decepticons while leading a team on the hunt for Metroplex. Story by John Barber, art by Chee, colors by Ronda Pattison. 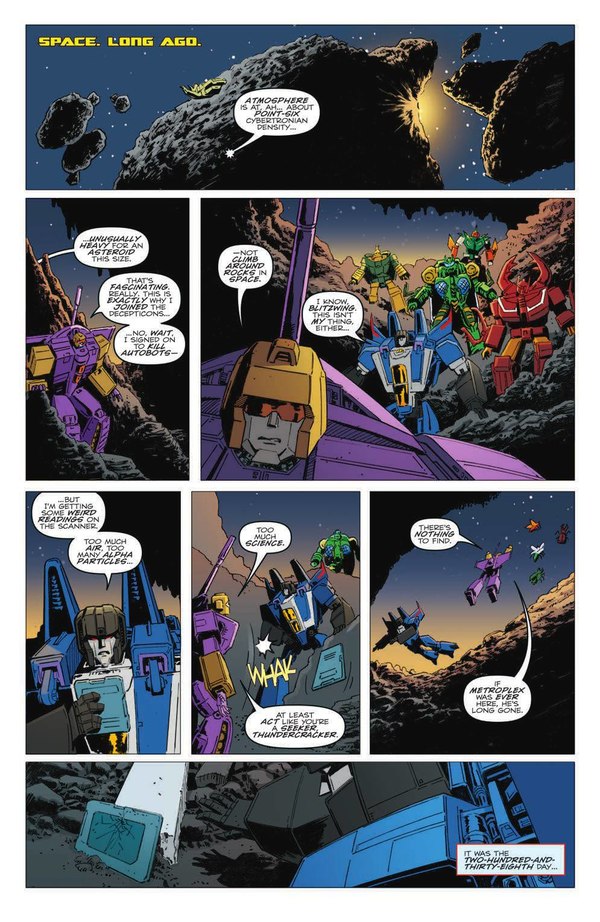 Blitzwing is just mad that he can't conscript a tactician, since high school football coaches haven't been invented yet.

This issue tells a story of Thundercracker under Bludgeon's command leading a small team on a quest to find Metroplex, long ago. A specific "footprint" presents a lead to follow, straight to a technologically undeveloped world. The Decepticon team proceeds to burn down the civilization despite Thundercracker's best subtle efforts at trying to spare as many as possible. Bumblebee, Jetfire and Nightbeat had followed the Decepticons across an FTL jump, and try to defend the native population. Thundercracker breaks away from his team during the combat and heads to an underground energon pool to find Metroplex, dormant while trying to recharge. Thundercracker ultimately chooses to conceal his discovery from the rest of the Decepticons, reporting Metroplex wasn't there to prompt his team to leave the planet and end the attack.

If the summary feels slightly truncated, it's because very very little actually happens in the course of this issue. The point of the book seems to be to look at Thundercracker as a character, by putting him in a situation that allows this to play up. And in the right circumstances, I would be totally cool with that. In this case I just feel like it doesn't do anything to offer a new insight or evolve Thundercracker at all. It reads to me like latching on to elements of Thundercracker's original Transformers Universe profile and building a comic book issue to demonstrate it. The resolution of the issue is motivated by Thundercracker wanting to stop the native population from being slaughtered just for being unlucky enough to live on a planet that caught Decepticon interest. RAC summed up Thundercracker in a way that I thought was appropriate and felt only kind of expressed here: Thundercracker is a guy who joined the Decepticons because he believed in the stated ideals, and so he's at odds with the dregs of society that filled out the faction. This kind of story isn't a bad thing to have, I just feel like there was probably other ways that these same ideas could have been explored, and more clearly and effectively as well.

Another way this could have gone was to perhaps follow up on what Thundercracker has done in the time since Thundercracker ditched the Decepticons and disappeared on Earth. Some people expected that's just what this would be in the time between the title being revealed and a plot blurb posted. I'm wondering if there will turn out to be a reason in the end for this and the previous Spotlight issue being set far in the past. If the only reason for it was to present stories in a setting independent of the current events, I just feel like this is going too far to get away from it all. I feel like a Spotlight issue could be, if well-written, a way to lead people in to current-time books by alluding to their situations in a story that stands fully on its own. These are a perfect vehicle to catch new readers and get them hooked, and that opportunity seems like it's being wasted in this application.

The annoying contrast to that opinion comes out of how Bumblebee is written in this, where I get the strong feeling of the way he's portrayed as Autobot leader, albeit leader in a much stronger situation than as seen lately. Given the story is set millions of years ago, it seems very out of place in the timeline, and so it stands out like a big goof on continuity. Meanwhile among the Insecticon troops Thundercracker was leading, Waspinator got added in their ranks, which was a neat nod to the fans, and in a way a logical addition. Though as far as I can tell, he was put in to do what Waspinator does best: get blown up! Even this universe hates Waspinator...

Waspinator sort of leads to the art. Granted, it's a weak segue, but I can pull it off. Chee brings a little unusual style to this issue, which leads to some odd appearances. Waspinator looks pretty much like like a hand-drawn take on the Beast Wars CGI model, where I think the original intent could have been to further roboticize him to fit in with the (Deluxe) Insecticons he was grouped with. That's not a big deal, I don't think. It keeps Waspinator unmistakable (even if he hadn't been directly named in the issue) and since it is the Deluxe Insecticons, he's not too far off the basic style. Thundercracker is a little more wacky. It seems like he's supposed to be in the Fall of Cybertron based design, but there's only the barest resemblance and it really skews more toward an F-16-based body. It's even a stronger feeling that way in the vehicle mode where Thundercracker emerges as this really odd looking hybrid. It kind of makes the retailer-incentive cover for the issue stand out, since Clayton Crain really hit the Fall of Cybertron body style strongly and it looks so good that way in Thundercracker colors.

I complained in conversation to RAC that I couldn't think of anything relevant to say about Spotlight Thundercracker, but he reassured me that Spotlight Thundercracker didn't have anything relevant to say either. If there's a single fault I would pronounce upon this book, it's simply not mattering. Where Spotlight Orion Pax did well to follow behind More Then Meets The Eye's Shadowplay story arc and give us another instance of an awesome Young Optimus Adventure so it didn't matter if the story had no overall consequences, Thundercracker just ends up reasserting established traits of Thundercracker and nothing else. I feel like people who have the context knowledge to understand what the issue is saying don't need the comic to say it, and people who aren't that familiar won't maybe get why any of this is supposed to matter or even find it to make sense. Thundercracker can be a deep character, unfortunately this Spotlight only superficially explores that potential.