Immediately after the end of issue 13 of the previous Transformers ongoing series (from November 2010) Megatron begins to put his house back together after it has fallen to nearly total collapse under three years of Starscream's rule. Megatron confronts Starscream who has fallen to deep disillusion during his time in command. Provoking a reaction of Starscream, Megatron test drives his newly restored body in a pursuit where more words are launched at Starscream than weaponsfire. Megatron is intent on forcing Starscream to reclaim his will to not only live, but drive the Decepticons along the path of conquest as he did before being burdened with the realities of leadership. 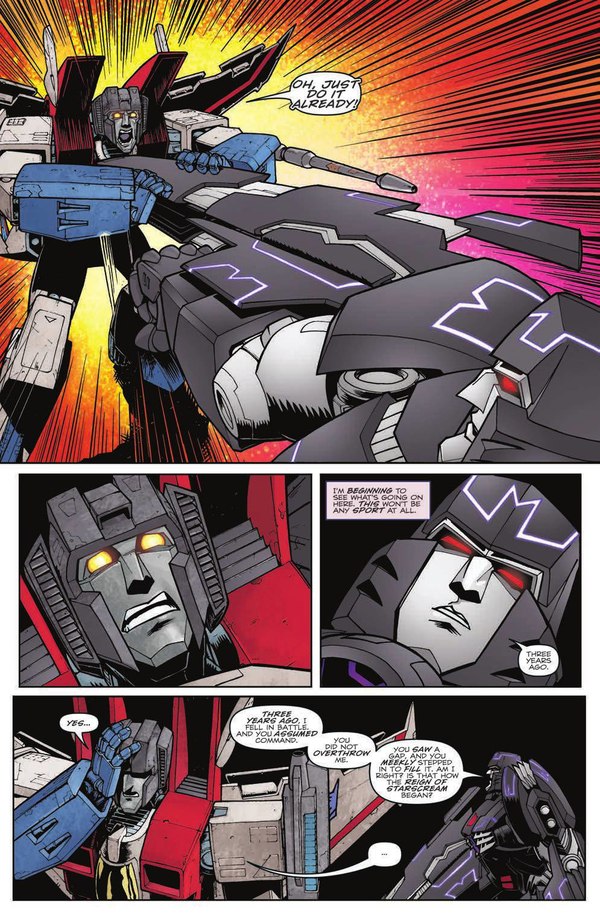 Two main forces drive this book along. One is clearly an exploration of the relationship between Starscream and Megatron. Considering the current state of things in Robots in Disguise, this is fill-in more than a little needed especially for newer readers that haven't had a lot of direct exposure to the dynamic between the current IDW take on the two of them. The entire span of the issue is narrated with Megatron's thoughts: Megatron is clear in wanting to take Starscream to an inch of his life for his failings, but when Starscream not only welcomes it, but even asks for it, the entire matter shifts to a different process. There is no question that Megatron never means to kill Starscream, and that the punishment Megatron intended to deliver and that Starscream seems to seek then becomes an exercise to wake up the "real Starscream." Starscream falling to depression over the course of his command of the Decepticons is not new ground being covered, but the depths of it being revealed here probably is greater detail than before. There is no contest to whether Megatron will retake command, the conflict of the issue hinges entirely around a disturbing exercise in reconciliation between the characters.

The other aspect is a blatant demonstration of how amazing Megatron's stealth bomber body is in much the style of when a new toy is introduced in a series by way of adding a new character or upgrading an existing one. Fans who are well familiar with Beast Wars will have a clear image of what I'm talking about in that regard, but all the fiction that is strongly beholden to the toys tends to do it in one way or another. Now, since the issue was published and this review written prior to Toy Fair 2013, I'm not gonna say that it's necessarily indicative of anything in particular. Let's make sure to remember though that it was just recently restated that IDW comic books would begin being packed in with Transformers toys this year...

Nick Roche both wrote and drew this issue, which can be a strength. When author and artist are the same, it's more likely to get the intended vision expressed. There are clever bits to the dialogue, and some things that are just fun, like Megatron's checklist - which does reoccur near the end of the book. Nick does what I think is a good job of explaining Starscream's feelings through Megatron's perspective. Though violence is a component, a bigger part of Megatron's attack is by knowing how to push Starscream's buttons and force reactions from him. It's a good writer that can tell a story this way and make us even start to understand what the non-perspective character is feeling or thinking solely by their responses - especially the non-verbal ones. As for the art, the only complaint I'll raise is that the faces don't always seem to be the characters. Nick Roche has a rather distinctive style of drawing faces, but it does not always lead to them resembling their own general appearances. The Starscream face Nick used in this issue is one I really liked and felt worked for the character especially in the mental state he spends almost the whole issue in. In general, where body designs make characters identifiable, it then will feel like they have received a generic face - something I thought really afflicted Megatron here. It's kind of minor, and otherwise the art is quite nice, especially in the vehicular combat sequences which I normally find can go really well, or really badly all down to the skill of the artist. A true victory for Nick Roche can be seen here when two characters with no conventional facial features, Shockwave and Soundwave, are made extremely facially expressive. I don't even know how that works, but it happened.

Despite being set around events of other older issues, Spotlight Megatron is not inaccessible for the uninitiated at all. There may be a few references that won't make sense without knowing a little background, but the story can be read entirely self-contained with no significant loss. Mark that as another point in favor of the writing, as it could be all too easy to let a story set between issues like this get mired down in continuity, or trying just to fit in the continuity. Happily it seems there are gaps enough around these events that inserting fiction here was no problem, and managed to enrich the existing story in the process. That's a good Spotlight.