A bunch of Autobots walk in to a bar. Somehow this is not the set up of a horrible joke, but rather the bulk of issue 13 of More Than Meets The Eye. Things only get better from there. Story by James Roberts, Pencils by Guido Guidi, Inks by John Wycough, Juan Castro, Guido Guidi, and Marc Deering, Colors by Josh Burcham and Joana Lafuente. 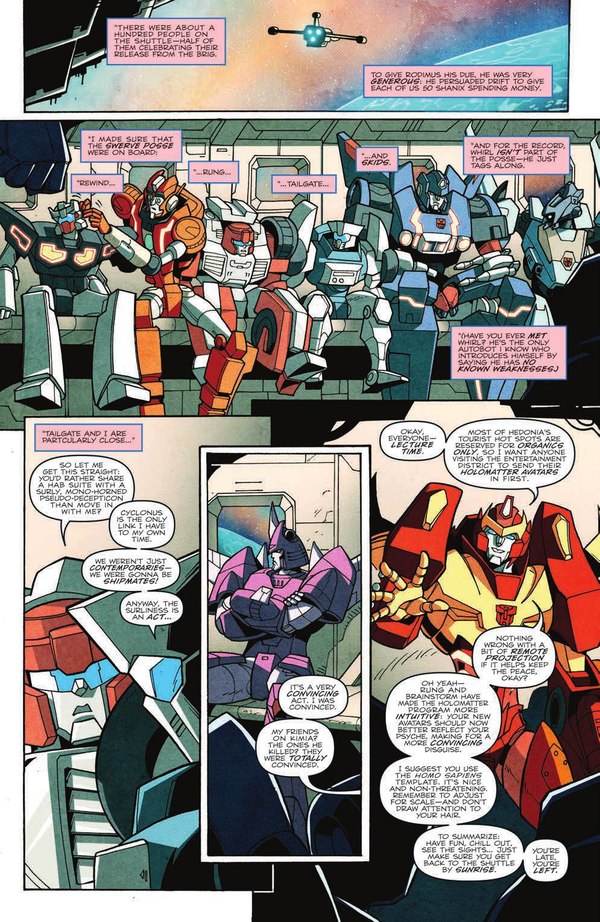 The Lost Light has finally reached a point where a transmission back to Cybertron is possible so that they can let everyone know they didn't die from the botched quantum jump. After the drama of issue 12, Swerve is once again with face - and mouth - and his composing a letter home is used to frame a story told in flashback. Much of the story is set in a bar on planet Hedonia where brief shore leave is granted to help relieve the stress that has been building among the crew. Odd man out in a group that includes Rewind, Swerve, Whirl and Skids is Ultra Magnus, who seeks to learn how to relax. (if that's even really a word)

I'm kind of purposely keeping the summary a little non-specific, both because in straight narrative terms there isn't a whole lot to recount, and because much of the meaningful content of this issue is in shorter snippets between characters. Plus a lot of things just conveyed visually. For all those points it's things that are much better to discover in the process of reading the issue. For example: Who is Skids dressed up as? I won't tell, because it's a well done, subtle reference that will not confuse readers that don't get the joke and is a fun bit of connect-the-dots for those of us who have the context. This issue has a lot of things like that which stand out more than they usually might since they're what the issue is about.

It's not an uncommon convention in writing, to put a more offbeat "day off" kind of story before getting in to the Big Plot Stuff, and that's really what issue 13 does here. Because nothing is actually going on, the book is given a chance to show off things that really make it shine anyway. I've long understood that having the chance to see what a character does in free time brings the potential for the most characterization, because people are not their jobs. Stories like this one let us see characters in situations or activities that we'd never be able to in a "normal" setting, a fact that this creative team takes full advantage of when presented the opening.

Art in this issue was handled by Guido, of whose art I am a great fan. As usual his style is present in the way he emulates other styles, though it is not without flaw. The most obvious place is with Guido's interpretation of Cyclonus, heavily inspired by the Universe toy. Where previously I had never associated toy motifs to this Cyclonus, at a casual glance I could see roughly half of him was using clear toy-derived details. This isn't a sin, and some of my favorite art will take heavy influence from the toys. But it's a point of inconsistency. One way I explained it was that the face was built wrong, which I knew because Guido's design made sense. This is really nitpick, though. The action and scene composition reads beautifully, as well as the physical expressiveness of the characters. I never advanced as an artist to where I could understand how to convey body language in still drawing, so seeing it done in such natural ways really awes me and is one of the small things I can latch on to in order to appreciate the quality of the art.

The end of the last page shows now that the day off is over with, it's time for the serious business to get underway. As we've been promised major stuff to happen going through issue 16, it is appropriate that we get one last goof off before a lot of consequences set in. The best thing about this issue is that it's a great point to jump on the series. There's just enough recap to get a new reader up to speed, and consequences of previous story arcs are not really visited upon. Just be careful! Once you read this, you will have a strong desire to obtain the preceding twelve issues, and I recommend indulging it!