Grimlock challenges Ser-Ket to single combat for the fate of his team in Transformers Prime: Rage of the Dinobots #3. Written by Mike Johnson and Mairghread Scott, art by Agustin Padilla, colors by Thomas Deer, and lettering by Tom B. Long. 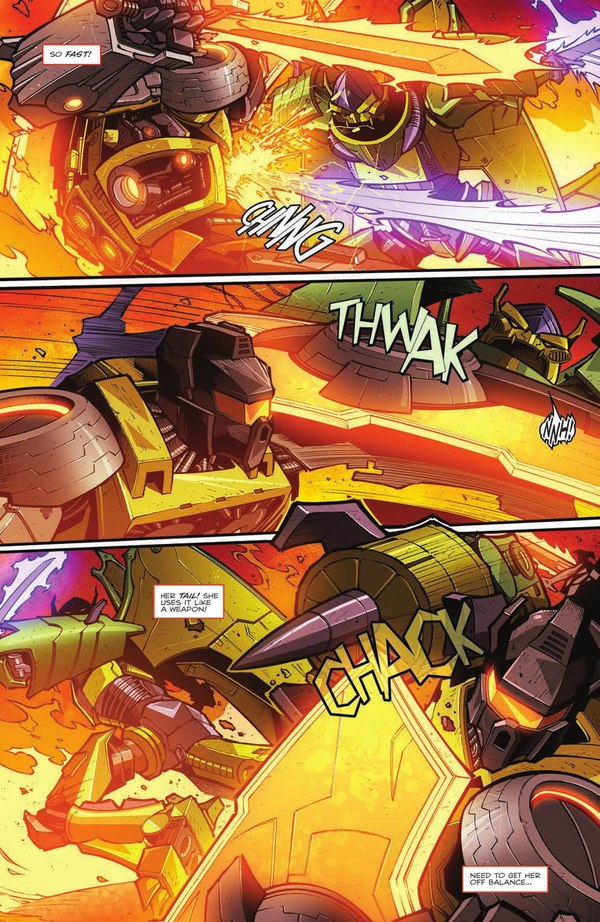 Surrounded, outnumbered, and faced with a brainwashed Swoop, Grimlock challenges Ser-Ket to a one-on-one battle. In exchange for Swoop's restoration, Grimlock wagers the freedom and free will of the rest of the Dinobots, and the battle begins. The leader of the Forged proves herself faster and stronger than Grimlock expected, and he's presented with a choice: lose the fight and surrender his team to Ser-Ket, or risk converting to Beast Mode and potentially cost everyone their lives?

The entire issue here is based around the fight, and in narrative terms it's a good and well-used device: make the hero's only chance to defeat his adversary to do something he doesn't want to do, something that will have consequences he can't predict. As it is, the consequences here are very light, as what Ser-Ket is goading Grimlock into doing is exactly what he needed to do to fix everything. Including Swoop. In all honesty, the concept of defeating brainwashing through blunt force trauma works a lot better in the Avengers movie: yes it's entirely a contrivance, but Joss Whedon hangs a lampshade on it, halfway makes a joke out of it, and writes himself out of a corner in the process. Here, it just happens, and Swoop is all better. Ta-dah! On the other hand, Grimlock is done very well here in the Simon Furman mold of a vicious but effective commander who feels an intense amount of responsibility for his troops above all else: despite coming on this rescue mission more or less to free Ultra Magnus, absolutely nothing takes priority over Swoop's well-being.

Writing-wise, there's not a lot else to say about this issue. The phrase "All Hail Shockwave!" wears out its welcome quickly, and "All Hail (Name)" on the whole is well on its way to becoming 2013's "One shall stand, one shall fall." Now that Grimlock spends some time speaking in Beast Mode, we get a better idea of how the writers are handling Grimlockian syntax: when in Robot Mode he has the occasional slip, but it's in Beast Mode, as a berserker, where he speaks in the "Me Grimlock" fashion. It makes a lot of sense for this version of the character, and I like the idea. Other than that, my only comment is that there's some dialogue during the fight that could've been placed more effectively to help the action flow a bit better. And the flow of the fight is a major problem.

I'm thinking the schedule has gotten to Agustin Padilla, as the art continues to become more fluid than is ideal for angular metallic lifeforms, once again particularly in the case of Grimlock. But far more crucial than off-model characters is the staging of the fight between Grimlock and Ser-Ket. Nearly every panel is at medium range or closer, with very few full figures- and most of those in silhouette -making it extremely difficult to follow the action. Long full-body shots are perhaps less dynamic, but it's more important to be able to tell what's actually happening in the fight and be able to follow it. There's a shield-bash on Grimlock's part that has absolutely no force behind it at all, and in the following panel I needed the dialogue to tell me what Ser-Ket was actually doing. The action doesn't flow from panel to panel logically in any way- no two moves seem to connect to one another. In the end, there is not a single panel of this fight that could not have been made more clear and in the process made the fight- which is practically the entire issue -more exciting.

The single most telling part of the layout problems for this issue are present in a single splash panel where Ser-Ket, in Dragon Mode, has taken hold of Grimlock and risen into the air. We get a medium range shot- again -which cuts off the edges of both figures and doesn't leave enough room to show the distance between the pair and the ground. If you pulled back a bit, you could get the scope of the action, show the other Dinobots on the tower and show the full figures of Ser-Ket and Grimlock in a way that has some impact, maybe even breaking out of the edges of the panel dramatically. The splash in question was more than half a page, and having seen Padilla do much better work in the first two issues, I'm certain that he'd have used the space more effectively if he had time.

The issue ends on pretty much the only note it could, and one more confrontation clearly remains. The next issue of Rage of the Dinobots is the last, and will not only be the conclusion of the story but the last piece of Prime fiction we get prior to the premiere of Beast Hunters. There's a lot of potential here- as well as a modern take on a classic battle in the offing -and it's my hope that Johnson, Scott, and Padilla are saving their best for last.