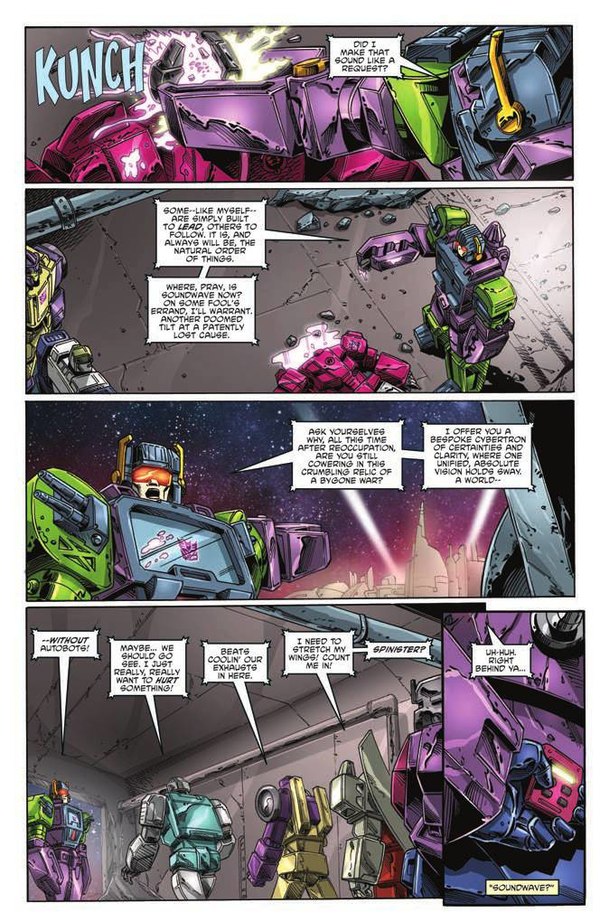 You'd think they'd run out of Decepticons, as often as this kind of thing happens.

While Scorponok forcefully makes his case to the Decepticon remnants on Cybertron, Soundwave inspects Bludgeon's Warworld and his new Ultimate Warrior Drones. The chaos on Cybertron continues, with corrupted Autobots destroying things at whim while the rest attempt to hide and regroup. Beneath the surface and out of communication range with the outside world, Hot Rod flees Demons (the pre-Transformer Cybertronian species last seen in Transformers #76 about 20 years ago) whose only vocabulary sounds suspiciously like "Intruder" and "Creator." As Hot Rod escapes the Demons and finds his way by chance into a hidden chamber, Grimlock is summoned by Scorponok, who has failed to provide the aid he promised the Dinobots. When Grimlock demands he keep up his end of the bargain he refuses, and instead proposes a test of Grimlock's loyalty. Grimlock fails- but Scorponok has planned for that.

I don't think going that far into the issue is really a spoiler since the moment in question is portrayed on the main cover. But for those who didn't read a lot of the Furman stories featuring Grimlock I feel I need to point something out: comic Grimlock is not stupid. He's a shrewd, capable (if harsh, short-sighted, and short-tempered) commander. But he is not the G1 cartoon character, who vacillates between dumb as a brick and childlike. While I understand he was downright desperate to have his Dinobots restored, I can't imagine this Grimlock not entertaining the possibility that Scorponok would have ways to enforce his loyalty. Grimlock is seriously off his game here: he really doesn't seem to have much of a plan at all, wandering around and asking a random Autobot if they've seen the other Dinobots lately. It just seems off, and I'm hoping to see Grimlock return to form next issue.

That's what didn't work for me, but quite a few other things did. We're once again pulling in a lot of old ideas into the story here from various points in the Marvel run. What Hot Rod finds in the hidden chamber has been shown in numerous Marvel Transformers comics, and it's bound to be a pretty significant find. Bludgeon's Warworld is of course ported in from G2. And then there are the Demons: used once in a UK story before their appearance in US issue 76, the Demons represent another take by Furman on his cosmic balance story: an earlier, flawed creation of Primus' from before the Transformers, the Demons are a counterbalance to the force for good the Transformers represent. Furman has gone to this idea a number of times over the years, and I think he's trying to make his definitive statement on the subject this time. We also have a common theme in all Transformers works, that of the Decepticons working against each other as much as they work against the Autobots. Soundwave, Bludgeon, Scorponok and even Galvatron all want basically the same thing- but in each of their versions, they're the ones who end up in charge at the end of it all. Which I suspect will figure heavily into their ultimate downfall. And lastly, Scorponok's Grimlock failsafe strikes me as very Beast Wars, and that's never a bad thing.

On the art side, things continue to be very good indeed. Lately I've been reminded of the foundations of good comic art, and Wildman and Baskerville undoubtedly have them. Battle and chase scenes are entirely followable, if a crowd scene is required they show it with no shortcuts, and they manage some excellent subtle before/after expressions here on the "unlocked" Autobots, in particular one whose eyes are merely hinted at behind a visor. (Also, look for some familiar heads and helmets as well as what looks like a lamp in the destruction of Iacon!) John-Paul Bove's colors continue to be slightly more modern than I envision for what is (in my opinion) at its core a "retro" book, but solid all the same. And I especially like the one "Demon-vision" panel, which is a lovely bit of foreshadowing achieved entirely with color.

Lastly, this month Guido Guidi wins the cover contest hands-down: Wildman and Baskerville give you an alternate angle on a scene in the book, Geoff Senior does a neat design of the Demons chasing Hot Rod... but Guido? Guido does an outstanding old-school Marvel cover of the Autobots wreaking havoc as Cybertron burns, with a gigantic Scorponok head laughing gleefully in the background. It downright demands a big, bombastic blurb like "Autobots AMOK!" or somesuch, which sadly isn't here, but that's a small thing. While I always have a soft spot for Geoff Senior, Guido's alternate covers capture a mood and a spirit of the Marvel days in a way that I wish the book did. It's hard to go back and emulate a style, and harder still to emulate your own style of writing and drawing from twenty years ago. I can understand why they didn't, and it was probably wise. You can't really go back, but Guido makes it feel like you could.

We're reaching that point in the story arc again where I can see where I think this is going, and it looks like the scattered Decepticon forces will soon come together- and it's not going to be a happy reunion. If balance is to be maintained a powerful force for good will need to step to the fore- and we've got the hints of that too. But before that, there's Grimlock- and next month looks like we'll be seeing the end result of his deal with Scorponok. Should be interesting!