Shockwave confronts his unfinished masterpieces, the Dinobots, with the intent of reclaiming them in the conclusion of Transformers Prime: Rage of the Dinobots. Issue #4 is written by Mike Johnson and Mairghread Scott, drawn by Agustin Padilla, colored by Thomas Deer, and lettered by Tom B. Long. 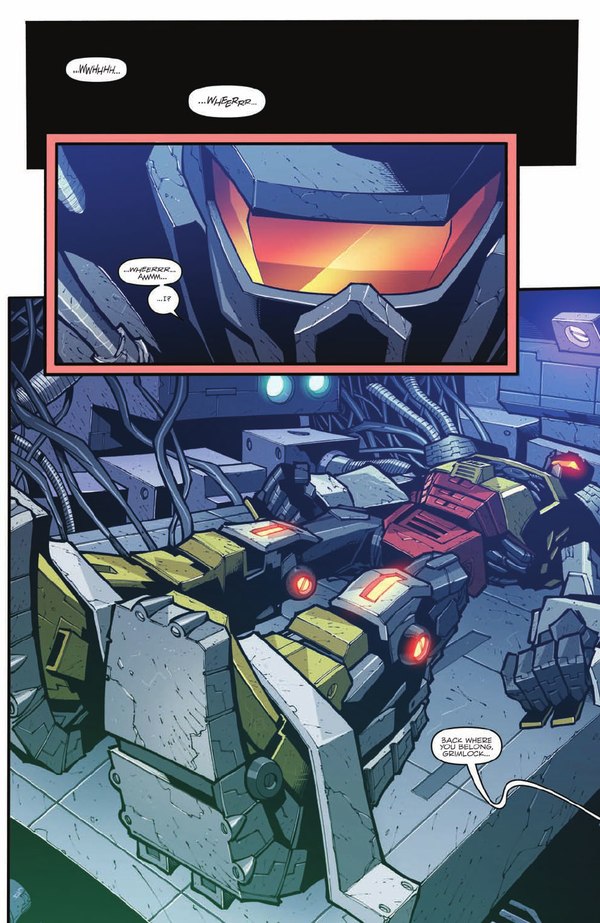 "It time for me Grimlock's checkup already?"

After a brief battle conducted from behind the safety of a shield, Shockwave immobilizes the Dinobots and Ultra Magnus with an EMP mine. Grimlock awakens strapped to an operating table as Shockwave explains his experiment: the Dinobots were part of a hypothesis that the ultimate warrior would require both sentience and power. But Grimlock's escape has made it clear that sentience is not worth the risks- and shortly Shockwave aims to "perfect" Grimlock. While Shockwave reminds Grimlock of his past as seen in Fall of Cybertron and removes his mask and visor, revealing his face(!), the other Dinobots and Ultra Magnus break out of their cell using the old "prisoner fight" ruse. As Shockwave roots around in Grimlock's head to find the self-aware bits, he hears the sound of rampaging Dinobots getting closer...

While I was expecting a big battle with Shockwave after last issue, it ends up being more complicated than that. Here he explains his research and his plans to Grimlock- and the implications of his continuing experiments would seem to me to be a pretty good clue as to what we're going to see in Beast Hunters, both the comic and the cartoon. Shockwave here is pretty much as he's been established in the Aligned continuity, which takes a number of cues from what has come before: he's a cold, logical Mad Scientist with a touch of hubris. His fervent belief in his own superiority trips him up here, which is a situation not-unheard-of for various versions of Shockwave.

The writing here is sharper than I've felt it to be in previous issues. There's a couple of entertaining lines in here, particularly in the mock fight between Slug and Ultra Magnus. Things move more briskly in this issue than last, primarily because we don't spend most of an issue on a single one-on-one battle. But it almost seems to me like that battle ran long; Shockwave's recapturing of the Dinobots might've been a more natural stopping point last time. But that resulted in this issue moving quicker than the last one, so I'm fine with that. While avoiding direct spoilers, the ultimate conclusion of the story is in a certain sense anticlimactic, but considering Prime's continuity we knew there were certain things that could happen and certain things that couldn't. In the end, everything is in place for the new Beast Hunters continuing series, which will clue us in to what the major players in this story are up to now, and what they've been doing in the millions of years since we last saw them.

I have to remember that every artist (hopefully) learns on the job, and I think we're seeing signs of that here. Agustin Padilla is seemingly getting into the groove of the monthly comic schedule now, as this issue's fight scenes are cleaner and the Dinobots seem more on-model this time. Shockwave's a bit more fluid, as sometimes his chest window is the appropriate hexagonal shape and sometimes it's more of a rectangle that's bent in the middle. But everything seems less rushed to me, and following the action is much easier, which is good. I also kind of like the face he draws for Grimlock here, appropriately serious and seemingly damaged, giving a good reason for the wearing of his trademark visor and faceplate. Also, kudos to him for basing Shockwave's shielding on the War For Cybertron/Fall of Cybertron shields!

Now that we've brought Prime viewers up to speed on the Dinobots' origins in the Aligned Continuity, the stage is set to fully bring them into the Prime story in the new Beast Hunters monthly. Rage of the Dinobots has had some really stiff competition from IDW's own Transformers comics, but as a warm-up act for Beast Hunters it shows some promise. I'll be there with an open mind- like a lot of us, I have a soft spot for Dinobots.