The Transformers: More Than Meets The Eye #14 - Generation One - IDW Comic Book

Looking in the basement was their first mistake. And then they sent in the mnemosurgeon. Many questions are answered just before an unstoppable force of destruction is set loose in this month's issue. Written by James Roberts, with art by Alex Milne and coloring by Josh Burcham. 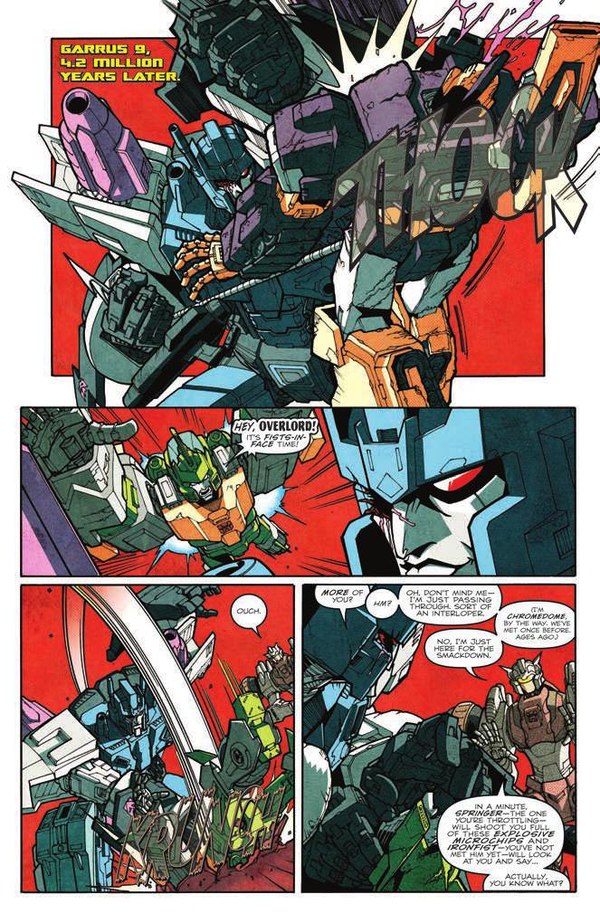 Let's call this, "mistake number one."

Chromedome probes Overlord's memories, and we learn what makes a "Phase-Sixer" the most powerful of all Decepticons as we watch Overlord ascend in position from gladiator to super-warrior. Chromedome's mission to discover the secret that makes these unstoppable juggernauts is a success, but he underestimates the capabilities of his subject. We then learn from Chromedome's memories who among Lost Light's crew were complicit in Overlord's presence in the hidden cell, as well as how Chromedome played a part in the current happenings back on Cybertron. And things are only going downhill from here...

So, we finally kick off the Overlord story arc, with his presence having first been revealed months ago. The issue uses the framing device of a memory scan to jump right in to the middle of what's going on before backtracking to show how and why Chromedome became involved in the project. Many had correctly speculated about one party that knew of Overlord's presence on the ship, but the other should come as a complete surprise - it certainly did for me! Yet another new exotic material is invented for the purpose of this issue, Ununium, the thing that makes the strongest of the strong even stronger. I imagine it has more effect than just virtual indestructibility, or else it would have been just as easy to reach in to Simon Furman's playbook and borrow Rheanium. Going by upcoming covers, it seems Overlord's promise at the end of this issue is likely to be at least partly carried through on. It's been said this arc may be longer than typical, and this issue clearly just serves as a lead-in issue to the real meat that we're due to see. I'm glad to see they started off by answering most of the questions surrounding this plot point instead of spreading them over the whole of the stoyline, so now we can more focus on what's happening instead of why.

The art really hit it this month, with distinct feelings between memory fragments, mental environments, and reality. The framing and staging of a lot of the panels was very natural to the settings involved and made the entire issue feel very immersive. MTMTE typically has high quality art and coloring, but I really feel like Alex and Josh were at the top of their game this time out. James Roberts meanwhile scripted excellently, even managing to tie in to an offhandish reference from Robots in Disguise in such a way that you have to be paying good attention to both books to connect it. Sadly I had to have it pointed out to me. But I loved the way the story was arranged this month, with almost all of it happening in a shared mental space between Overlord and Chromedome and making use of that to support revealing key points out of sequence. It was handled to really strong effect. The revelations about the kind of work Chromedome had gotten in to in the far past also continue to deepen the character and show just how much he's hiding from everyone around him and what he's really capable of when it comes right down to it.

It's really everything I expect from MTMTE, what I consider easily the strongest book every month, and definitely what I look forward to the most. It's great to be at a point where I know I can count on such a high quality level consistently every issue.