On Earth during the events of Police Action, Bumblebee learns how to be a leader and take charge. ...by getting beat up a bunch. Story by John Barber, with art by David Daza and coloring by Zac Atkinson. 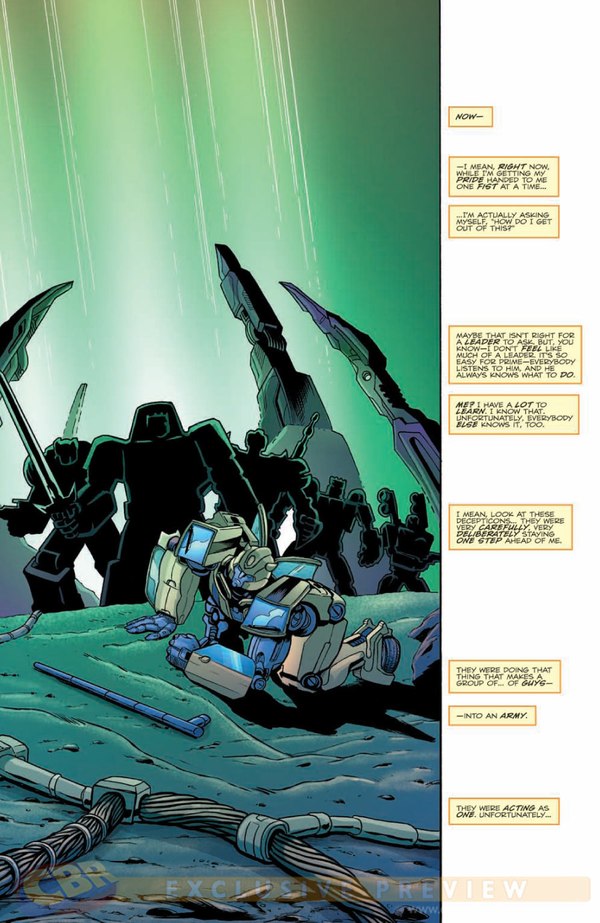 I'd call it "Bumblebeatdown", but even I have standards.

The story starts in mid-curbstomp, as Bumblebee begins to reflect on what brought him to this point. Flashbacks reveal Bumblebee and his small team, as the only remaining Autobots on Earth, trying to root out the remaining Decepticons while Optimus Prime has left to take the imprisoned Megatron back to Cybertron. But Bumblebee is not asserting his authority very well, and the Protectobots at least appear to defer to Prowl more readily. Bumblebee decides to carry on with his plan, support or not, and visits the disaffected Thundercracker in hopes of getting some intelligence on the regular Decepticon army. Between insights and a scrap of technical data from Thundercracker, and a visit to a human ally, Bumblebee finds what he's after - as well as a space bridge terminal. Which brings us back to the present, with all the Decepticons on Earth about to cross the space bridge to Megatron's location, and only Bumblebee to stop them. Though most escape through the space bridge, Bumblebee is able to subdue all five Stunticons by himself. In doing so, Bumblebee finds his own voice of authority, and gains a new respect from those under his command.

Since we know for certain now these Spotlight issues are mainly designed with intent as pack-in books with upcoming Generations toys, I've found it a little easier to take them being as standalone and generally inconsequential as they are. Spotlight: Bumblebee is really not much different in that regard, as it serves as a simple character piece to help define Bumblebee during his growth as a leader. The story itself is more than a little formulaic though, using a standard plot of a leader taking a great risk that ultimately proves himself to his subordinates. In this case, all the important roles are filled by Transformers, but the circumstance is one that can and has been applied to any given story setting. The art, though clear enough to be able to follow the action easily, to me kind of showed a lack of familiarity with doing Transformers. As I looked in to the artist, the only Transformers-specific credit I could find for him was doing one chapter of a Prime graphic novel. There's no fault in not being used to dealing with these sorts of character designs, and the art was well executed otherwise. I'd like to see David Daza continue to refine his take on Transformers, as the biggest fault I can point to in this case was being somewhat off the mark with specifics of character models. In a way there's a sort of Andrew Wildman quality to how the Transformers look, and I imagine that would probably be an attractive quality for a fair number of people. I'm not completely happy with the coloring though. There's a very rich quality to all the colors, foreground and background, which can make perspective hard to read and also can screw up composition. Even in situations that should specifically call for desaturation of colors, like night time panels, everyone's "night" palette is still bright, vibrant colors that don't well depict the idea of being a low-light situation.

Spotlight: Bumblebee may be the last among the Spotlights set any distance in the past, as Trailcutter and Hoist's solicitations suggest occurring within the timeframe of the current ongoing titles. I'm sure hopping around the timeline as has been done so far was in part because of how unusually far in advance these books were worked on, some possibly predating actual writing on either MTMTE or RID. We can't know that for certain, but while these Spotlights have been at least interesting diversions, I'll definitely enjoy getting newer ones in more up-to-date settings. Squeezing books in between issues or even scenes in more tightly focused storylines is a challenge, but doesn't leave a lot of room to play with. But the Lost Light seems tailor-made for sidestories, and that's what I'm really looking forward to out of this series.