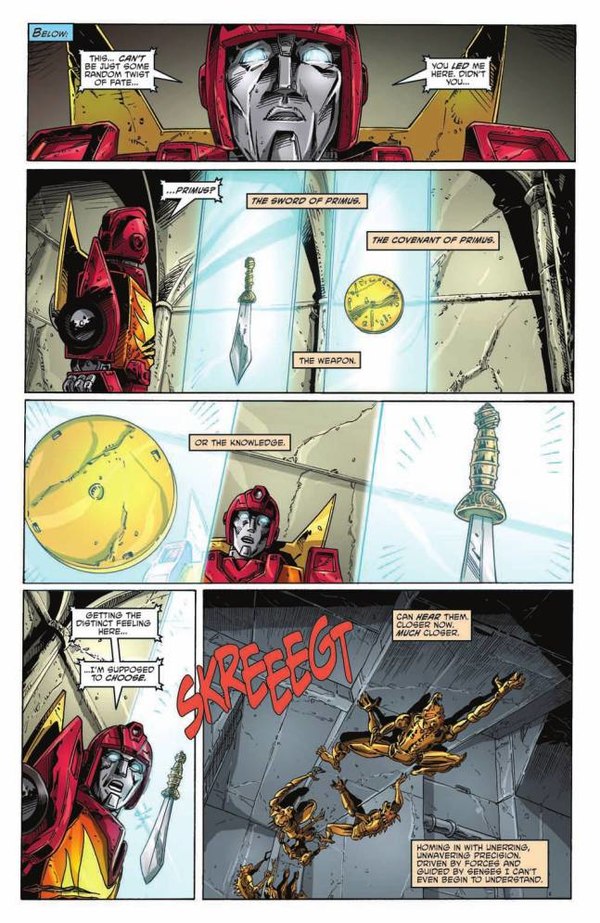 "Let's make a set of rules for my children to live by and then hide it!" -Primus, apparently

On the run from the rest of the planet, the Dinobots make plans to reunite with Grimlock- and kill him for bringing dishonor to the Dinobot name. They break into the Nursery- home of the Nucleon-affected Transformers -a signal that Grimlock picks up on immediately. Elsewhere, Perceptor spells out the premise of the series for Scorponok- that there is a balance between good and evil in the universe that cannot be forced into one alignment or other- and Scorponok is not pleased. Hot Rod examines the items in the secret chamber, which are revealed to be the Sword of Primus and the Covenant of Primus, and knows instinctively that he must choose. On Earth we get the story of how Shockwave came to be wired directly into the Ark, and then it's back to Cybertron for some ancient Cybertronian history and a Dinobot reunion!

Okay, so I was wrong last month: the items in the secret chamber beneath Cybertron are the Sword of Primus- I got that much right -and the Covenant of Primus, which I'm sure Furman asked Wildman and Baskerville to give a similar appearance to the Beast Wars Golden Discs on purpose. That's the biggest surprise in the issue. Grimlock's reunion with the Dinobots was done in a way (both in the narrative and in the promotional material) so as to take the surprise out of it for everyone but Grimlock. I guess it wouldn't have been much of a surprise if they'd just ambushed him, but I almost wish it had been staged that way instead. And then, the resolution of that conflict seems a little abrupt. The rest of the issue really feels a lot more like ReGeneration 2 than G1: Scorponok is pulling Jhiaxus' "I have evolved no really I'm not a crazed killer" schtick, Hot Rod is having G2 Optimus Prime's visions with the Demons substituting for the Swarm, and Perceptor exposits the Cosmic Balance concept that the Liege Maximo gave us on the last page of G2 so very many years ago. Again, the familiarity of all this- the setting, the style, the themes -is working against Furman, as is the fact that ReGen One is up against two brilliant Transformers books that are doing new things, exciting things. I love Furman- I've got a huge stack of his G1 and G2 TPBs right next to me -but here he's running over a lot of old ground, and doing it very slowly.

Also, is "put our house in order" on the Furmanisms list yet? Probably should be, if not.

There's not much new to say about the art this month; Wildman and Baskerville are polished craftsmen, and their aesthetic remains solid if not my favorite. I'd swear John-Paul Bove is coloring the characters more brightly this month, or maybe it's just that we've got so many characters with red that they really pop. Either way, the book looks good and bright, and I like that.

What's neat about the covers this month is that they each cover a different part of the book. Wildman and Baskerville encapsulate Shockwave's story, Guido Guidi gives us Hot Rod's dilemma, and Geoff Senior's cover shows us an action scene from the Nursery. Guido's cover composition wins again, displaying great composition and that eye for Marvel detail: he remembered that Hot Rod was magenta in the comics! Senior's cover is a really great piece of art as well, and does a better job with the action than the interior panel it's based on, but Guido just knocked it out of the park. Geoff Senior did a great cover, Guido did an amazing, note-perfect Marvel cover.

As Rodimus continues his quest, Cybertron is still in chaos with only a handful of Autobots and Dinobots left to stop Scorponok. Now that the Dinobot reunion is over, it's time to get down to business- so next month, we'll hopefully do just that.