This review contains plot details for the first three episodes of Transformers Prime: Beast Hunters. Do not read further if you do not want to be spoiled! 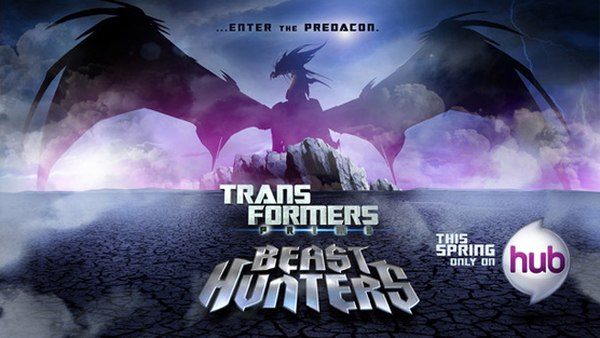 The Decepticons search for Autobot survivors among the smoldering ruins of their base, while brandishing the power of the Darkmount fortress at Agent Fowler to keep the military from responding. Sent to Cybertron to retrieve the remaining Iacon Relics, Knock Out returns with Shockwave, who has worked in isolation on Cybertron following his fight with Arcee and Cliffjumper on the space bridge. The escaped Autobots work to regroup while avoiding being detected by the Decepticons, to varying degrees of success. But Wheeljack has been captured from his crashed ship, while Smokescreen tries to tend to a severely damaged Optimus Prime.

Starscream allows Wheeljack to escape so he might lead the Decepticons to other Autobots with a tracking device hidden in his body. When this quickly fails, Shockwave suggests using one of his projects - a Predacon cloned from remains of ancient Cybertronian life forms. Arcee and Jack encounter Ultra Magnus and use his ship's sensors to track down the other Autobots. Bulkhead and Wheeljack plan to blow up an energon mine as a beacon for the other Autobots, but are attacked by Shockwave's "pet" and only saved by the timely arrival of Ultra Magnus's ship. Ratchet, Bumblebee and Raf meanwhile try to get the wreckage of the Harbinger up and running again to use its resources and set up a temporary base. They're shortly joined by the rest of the reassembled Autobot team, and Ultra Magnus quickly asserts military authority and declares that the first priority must be stopping Megatron. No one knows where Smokescreen is, and Fowler says he didn't see anyone leave the Autobot base after it was destroyed, leading everyone to question if Optimus is still alive.

Smokescreen has used this time to take the Forge back from inside Nemesis, using the phase shift device to travel more stealthily. Smokescreen wants Optimus to use the Forge on himself to repair his body. But Optimus insists whatever power remains must be used toward the restoration of Cybertron. That goal is more important than his own life. Smokescreen tries to remind Optimus that only a Prime can wield that power. Optimus tells Smokescreen there will be another Prime, and that it's time for a new leader - Smokescreen.

The first three episodes of the season weave together pretty effectively into a continuous story, and I will be very surprised if they're not released in their own DVD volume as a "movie" a little later. This is a strength from that perspective, but from a weekly viewing stance, I believe taking three weeks to begin to get back to a status quo will be hurtful. It's going to be a short season, and the pacing of these episodes does not seem very conscious of that fact. Ultra Magnus gathering the majority of the Autobots and reestablishing the team ought to have been the focus of the second episode, not the third. In truth, almost the entire story told across the first three episodes could have been easily condensed down to two and not only seen no meaningful loss, but I believe it would have improved the flow of the story.

You may notice my summary doesn't say much about Predaking's involvement. But the truth is Predaking is barely involved. He's treated entirely as a Monster of The Week just as Skyquake, the scraplets, or the first Insecticon were. Predaking does not have any dialogue, nor is he named in the episode in which he appears. Predaking's appearance occurs in the third episode. The third, out of thirteen. Information from the premiere event where production crew were in attendance revealed that the beasts element was approved after work had already started on season three and had to be added in at a later point. That seems fairly evident now seeing this in practice. I hope that delay will not be felt too strongly in subsequent episodes and that the Predacons in general will get some meaningful use.

The writing is of the usual level seen in Transformers Prime. Whether you find that to be a positive or negative value is something you've already decided upon and I won't try to sway you one way or the other on that note. There were nice character moments among the scattered Autobots, and some humorous situations among the Decepticons. But in general terms it was simply typical Prime writing - technically competent, usually intelligent dialogue, but nothing really innovative or particularly creative in the course of it.

The voice acting on the other hand is the usual high quality work. Predaking did not have any lines yet, but Ultra Magnus was a nice casting surprise as he was performed by Michael Ironside, probably most notable to cartoon fans as the voice of Darkseid in Superman The Animated Series and Justice League, along with a slew of other acting credits to his name. I feel like he was a really solid choice for a military commander style Ultra Magnus. He conveys authority well, and works really well as a character who's supposed to be older and battle worn somewhat. He doesn't have a lot of lines across these episodes, but hopefully that will increase a bit going forward. I wasn't much a fan of Shockwave's voice when he appeared last season, and it still doesn't really do anything for me. Nothing against David Sobolov specifically, I just don't hear Shockwave in his voice. With Steve Blum among the voice talent for the show already, it's more a shame he couldn't reprise the Shockwave role from War For/Fall of Cybertron.

I didn't hate these episodes, and that sort of is my largest overall complaint. I didn't hate them, and I didn't love them. They made no real impression on me, and to be kicking off the season, that's a really bad thing to have happen. We've got nearly a quarter of this season here, and the story has yet to really hook me. Watching these has not made me anxious or excited to see episode four. It's long been my belief that the worst offense any form of entertainment can commit is being unremarkable. Maybe I'll be proven wrong, but all past evidence indicates to me that none of the events from these episodes are likely to have lasting, visible consequences, and that makes it really difficult for me to really care about what's going on. I hope the next episode shows a sign of going in a different direction than regaining as much of last season's status quo as possible, but at the same time I probably will not give the show another thought until someone reminds me the next episode is about to air.

I really hope I'll turn out to be wrong about the way the season goes. Or if not, that the Beast Hunters comic book will give me a more exciting alternative when it starts. I just want to be able to enjoy something.