The Transformers: Robots In Disguise #15 - Generation One - IDW Comic Book

Devastator rampages in New Iacon- and Prowl can only reflect from within the monster's mind on how he came to this point. "Plan for Everything" is written by John Barber with pencils by Andrew Griffith and inks by Brian Shearer, colors by Josh Perez and lettering by Shawn Lee. 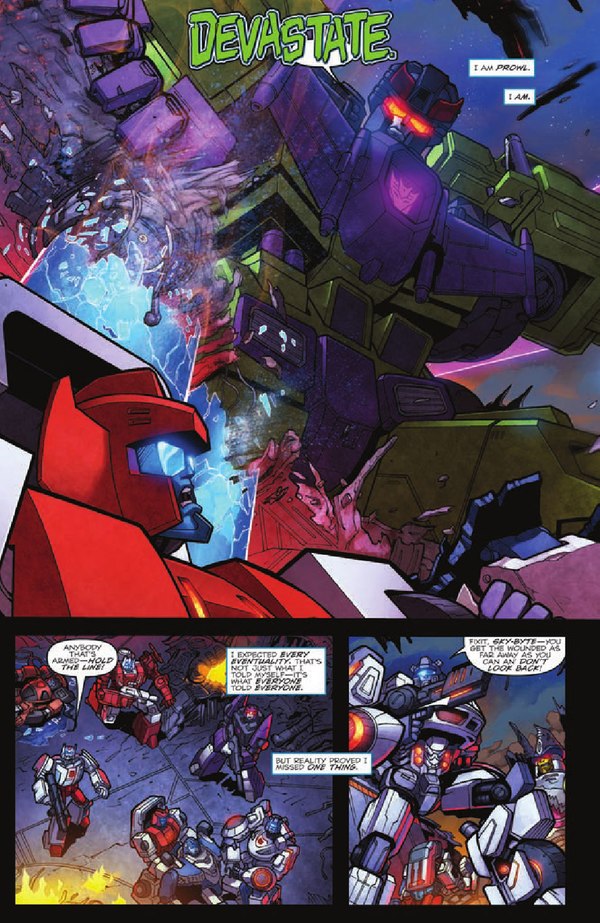 Devastator (Now with Prowl Head!) attacks the Med-Center, and Megatron explains more of his plan to Bumblebee, specifically that Jhiaxus, is manipulating Orion Pax, and Shockwave is in contact with his mentor Jhiaxus... wherever Shockwave happens to be at the moment. Back at the Med-Center, Ironhide arrives with the Dinobots and Superion to rescue Jazz and company and take on Devastator directly. As the battle continues, Prowl muses on how his time on Earth changed him, and how Spike Witwicky made him realize the kind of person he didn't want to be. Bumblebee asks Arcee why she'd side with the Decepticons, and gets a very helpful answer. As the Autobots rally and the Decepticons regroup, Prowl finds that it's harder to maintain your individuality without Bombshell directing Devastator...

We get some interesting character moments here, but the pacing of the issue is slowing compared to the last few months. We get some insight into how Prowl sees the world, and how war has forced him to compromise in the name of survival- a very painful thing for a person who sees the world in black and white. We also get Megatron's fatal flaw shown very clearly: he is completely unwilling to compromise. Such an attitude is what makes him not at all suited for this new postwar age- assuming that age survives. It's an interesting comparison, showing how too much compromise leaves Prowl adrift and how no compromise has made Megatron into an intractable force for destruction. And we also get looks at other characters and how they're trying to preserve the new peace, and as is typical of the book, it doesn't break down by faction as neatly as you might think.

The character writing, as always, works. The action unfortunately slows things down considerably, and the focus on Prowl and his narration dictates a certain pace for the Devastator segment of the issue. That could be a little faster for my tastes. In the end, the characters have all moved and acted to a certain degree, but we're no closer to the resolution of the story than we were at the beginning of the issue. As has been the problem with much of ReGeneration One of late, this issue feels more like connective tissue than the meat of the story. Unfortunately ReGen One has reached a point for me where it's all gristle, and given RID's stellar track record, I don't expect that to be the case here. I sure hope not!

There's not a lot else to say here: if you're going to have this much action it should flow and follow naturally, and Griffith's art manages that nicely. The only parts that are tough to follow are during an attack by Frenzy, and that's entirely intentional. Hats off to Griffith, Shearer and Perez to rendering his sonic attacks very well. Also, Perez once again manages to delineate quickly-switching scenes cleanly with the use of color. It's done so well and is so helpful that on the few pages where the palettes for the Black Room and Devastator's location are so similar, it's kind of jarring to have to remind yourself that they're in different physical locations. On the other hand, the end of the issue features the palettes for a variety of different scenes converging in such a way that indicates everything's coming together for the final battle.

Which the advertisement for the next issue confirms! This is a rare issue for Robots in Disguise in that it doesn't feel as satisfying unto itself; even last issue, which was clearly a chapter in a larger story, felt better on its own than this. It began and ended on such perfect beats and the revelations were so important to the story that I feel like it would've been better to get to the conclusion this issue rather than next. There's no way anything other than a conclusion could follow issue 14 satisfactorily. I'm left this month feeling the same way I did last month: I'm really looking forward to how this is resolved, and how it affects the Robot Politics in the longterm.