An incapacitated crew, Decepticon mercenaries, and no forcefields. How can Trailbreaker save the day? All this and more in Spotlight: Trailcutter, or "The Reluctant Specialist"! Story by James Roberts, Art by Matt Frank, with coloring by Thomas Deer. 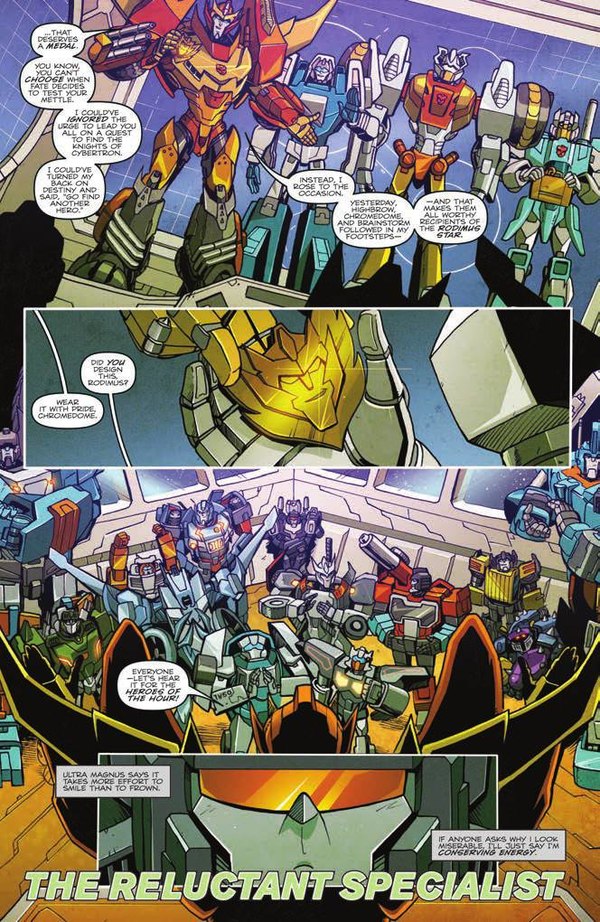 Trailbreaker is a specialist, defined by his ability to generate forcefields. And this depresses the hell out of him, especially when his role in protecting and repairing the ship following a minor collision goes unrecognized. With some encouragement and advice from Whirl, Trailbreaker tries to change his image, beginning with renaming himself Trailcutter. But like most things Whirl is involved with, this ends up going badly very quickly, and Trailcutter returns to his room to recharge and escape his problems with sleep. But when he awakens, he finds that he's the only member of the crew left to stop a team of Decepticons that have invaded Lost Light. And worst of all, he can't create any forcefields! What is a specialist to do without his specialty?!

We're finally presented with a Spotlight story set within the "current" timeframe of IDW continuity. The editorial note on the credits and recap page places this between issues five and six of More Than Meets The Eye, but let's be fully honest here - it doesn't matter at all what specific point this takes place at because it's a Spotlight set aboard and involving Lost Light characters. I know I'm not alone in the thought that getting more stories in this setting will always be welcomed and gratefully received. Spotlight: Thundercracker some months ago was the other instance of the revived Spotlight series where I felt like the story it told was not a slave to its setting. Spotlights Megatron and Bumblebee both had a constraint of being forced between the scenes of standing fiction from the same point in the timeline which greatly limited what they were able to do. Spotlight: Trailcutter enjoys a freedom because Lost Light has been shown to be a very rich, very deep well from which to draw story material, so self-contained, very episodic stories like this don't feel like something trying to be retconned in to place. This reads, thanks to James Roberts' typical style, like any regular issue within the run of More Than Meets The Eye that just happens to be following Trailbreaker/cutter/blazer/mix/whatever with particular focus. The plot itself is fairly formulaic, but that doesn't really hurt when it can be spiced up with characters and aspects from one of the best ongoing comic books around right now. The flavor of the setting really brings what is otherwise a kind of tired story to life and makes it a very enjoyable read.

Matt Frank's art is an unexpected highlight of this issue for me. Though carefully adhering to the character models, he brings a new style to everything which along with Thomas Deer's coloring gives an almost cartoon look to it. It's something that resonates really favorably with me, and seems all the more appropriate when I was reminded that Matt Frank was also the artist on Mars Attacks: The Transformers. He also treats us to a number of background cameos and easter eggs in the art, such as Kamen Rider V3 without note or explanation. There are other slightly less remarkable things tucked in to the background, too. The cameos and minor appearances seem better executed than for instance Waspinator's inclusion in the ranks of the Deluxe Insecticons in Spotlight: Thundercracker. Nobody really gets name dropped, they're just there for you to pick out as you notice them. It gives me a sense of the artist and colorist working together to have fun while creating the art for the issue. And when you find that first background appearance, it really makes you stop and carefully start examining each page to see what else might be hidden somewhere. Going back to the coloring of the issue, I think this really shows how a brighter, more saturated coloring style could benefit the main series. I don't think this Spotlight would have had nearly the sense of goofy fun if using the desaturated coloring. There was more of a feel of a vibrant environment full of life and activity conveyed by the stronger colors. In comparison the normal MTMTE coloring comes across as a bit sterile, if not oppressive. Think of being outside on a sunny day versus inside a hospital room with banks of fluorescent lighting.

This Spotlight makes vague references to Hoist's special mission, which should be the focus of Spotlight: Hoist out next month. Sadly, there's no more Spotlights solicited after that, at least as of the time I write this. And that's a real shame given how well this one validates the format. Orion Pax, Megatron, Bumblebee, all of them read to some degree or another like a toy ad above all else which progressively soured me on the idea of the Spotlight series. Trailcutter doesn't exactly break that mold, but it works the situation in a little bit different way. It's a solid character piece as well as being a decent mini-adventure. Bumblebee and Megatron didn't do that well at all, and Orion Pax only just sort of managed the adventure side while being eclipsed by MTMTE's Shadowplay storyline. And for the purposes of this issue's eventual existence as a toy pack-in, it offers a foot in the door to the proper More Than Meets The Eye series in a way that I think will really draw people in. I wish these had all been able to do their jobs to this degree of excellence, and I really wish and hope that we will get more after Hoist.