The Transformers: Robots In Disguise #16 - Generation One - IDW Comic Book

As the battle with Megatron and his Prowlified Devastator concludes, the fate and leadership of New Iacon are decided in "Heavy Is The Head". The issue is written by John Barber with pencils by Andrew Griffith and inks by Brian Shearer, colors by Josh Perez and lettering by Shawn Lee. 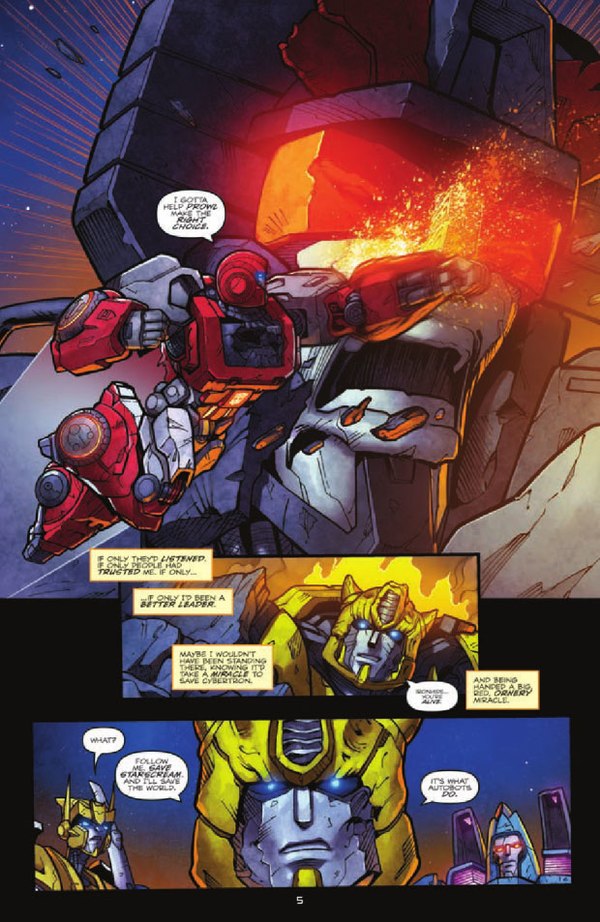 I can't help but think that artists relish the opportunity to draw panels like that.

As Metalhawk and Dirge lecture Bumblebee about how his goal of killing Megatron is bad and wrong, Megatron's forces continue to destroy the city. But Ironhide and the Dinobots arrive to the main battle and Ironhide takes on the job of getting Prowl separated from Devastator. Inspired by Ironhide's not being dead, Bumblebee leads the charge while Metalhawk tries to rescue Starscream. Metalhawk's first reward for this is getting an arm shot off by Turmoil, who calls the pair cowards and Starscream an opportunist. Starscream seizes the opportunity to show Turmoil that he was not Megatron's second in command for nothing. In another part of New Iacon, Swindle is trying to help Blurr, who was hurt trying to help him. Needlenose decides this is a capital offense, but a group of primarily former Decepticons fends him off because they want a chance for ordinary lives. Back at the battle, Prowl is freed, and Megatron initiates his real plan: to assume control of Devastator himself. And the rest is too spoilery to get into!

So this the end of this story arc, and probably Robot Politics in general. It ends about the way I anticipated months ago, but not quite in the exact manner. It's nice to have Transformers fiction that can be surprising again. The battle is resolved in a way that makes sense given the events of previous issues- as is the leadership of Cybertron. The central thrust of the story, as delivered by Dirge, is that there's no way for there to be peace if you keep thinking in factions and can't let go of the war. After millions of years most of the Autobots and Decepticons have this problem- I have to admit that it's difficult for me to not think of Transformers in terms of Autobots and Deceptions. It's easy to do, especially with Megatron as the villain of this arc. But Megatron is the villain of this arc not because he's a Decepticon- there are plenty of ex-Decepticons who want nothing to do with him -but because he's leading a group of people who will take total victory or nothing. Guess which one they get?

The corollary to the point the book is trying to make is that the "greater good" as an excuse to do inexcusable things cannot create a lasting peace. So it's kind of the opposite of Dark of The Moon and the live-action films in general in that regard. While the writing is all in service of these points, and at a few brief junctures we approach Furmanspace- the point at which the characters exist and speak only to express and serve the point of the story -we never get there because John Barber, of course, knows better. Yes, Dirge gives us the moral of the story, but it's because this is something Dirge believes, and he continues to behave in a way that makes sense in light of that. The art is good as always, though there is one fairly important action panel that could've benefited from being staged a bit more clearly, another example of where the reader's point of view is a little too close to the action. Also there's one panel, also very important, where I feel from his expression that Metalhawk's dialogue should read "jAam!" Otherwise though, it's all really nice work, and I love the panel of Ironhide punching Prowl-Devastator in the face. The coloring remains solid as well, though with most of the city on fire it's not as easy to delineate specific locations and scenes as I might like. Considering that battles are by nature chaotic, that's not particularly out of place though.

So, here we are. I'm not sure what happens next, except that the preview promises another look into Shockwave's origins and the beginning of "the biggest Transformers event in comic book history." I don't know how I feel about the latter; a lot of what I enjoy about Transformers comics at present is that they avoid doing a lot of the dumb stuff that traditional superhero comics do. Up to now that included big "events." This last four issues was really as big an event as I ever wanted or needed. But whatever comes next I expect it'll be well written, and I expect I'll enjoy it.