The Transformers: More Than Meets The Eye #16 - Generation One - IDW Comic Book

The crew of the Lost Light begin the slow process of recovery and coming to terms with the losses after the events of last month's issue, and while many want to lay blame, others simply wish to forget...
Story by James Roberts, pencils by Agustin Padilla, inks by Jose Aviles, with colors by Josh Burcham. 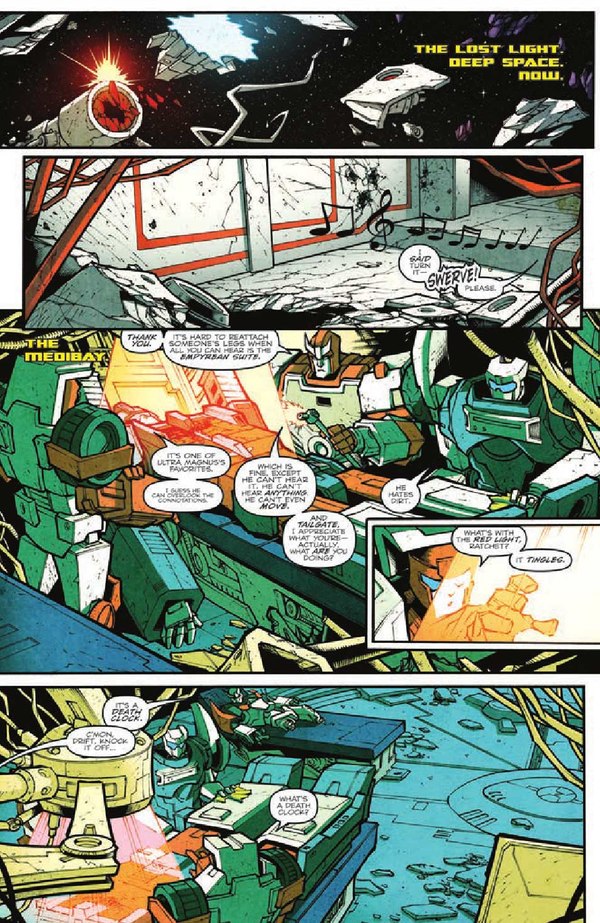 ...waitaminute... Ultra Magnus isn't even in the right body on that circuit slab!

Ultra Magnus yet lives! ...for a little while. Despite the best efforts of Lost Light's medical personnel, Ultra Magnus only has days left before his spark extinguishes. Elsewhere, Rodimus promises an inquiry to determine who's responsible for Overlord boarding the ship, before trashing his office in a fit of rage. Rung's attempts to help him understand his feelings just cause another wave of anger to rise, held back only by Drift's arrival with something important to discuss. Chromedome by contrast is showing little outward sign of distress at the loss of Rewind, even during the funeral service. Brainstorm understands why, and confronts Chromedome privately as well as delivering a message to him. The Overlord inquiry is closed, as the guilty party has come forward to accept responsibility for his actions.

The writing of the slow process of recovery beginning on the ship is accomplished very well, and highlights some really strong moments with certain cast members. Chromedome of course gets a good bit of focus and some more background filled in, but I also thought the scene between Rodimus and Rung was very informative. But under all the specific elements, it all felt real. The emotions and reactions to this kind of loss were very well represented and believable. In an issue where the focus is on how characters have to come to terms and start to move on, the strength of these interactions is so very important, and James Roberts hit those notes perfectly.

I'm sorry to say the art was not equal to this task. More Than Meets The Eye has done well with its substitute artists so far, but this month saw a marked step down in visual quality. Agustin Padilla only partly matched to the character designs, with many seeing details simplified or other changes owed to drastically different art style. Other things might be simple oversights, like most characters appearing to be about the same height. Those are not *as* important in the end. The poor composition of panels hurts much, much more. There are other technical sort of problems I could point to, but I kind of hate nitpicking on someone's art. The composition is a major hit though since so much of comprehending a comic book relies on that. There's a two panel sequence that informs a major part of the end of the issue, but it's not clear what it's supposed to be showing, and even when you get to the "payoff" shortly afterward you might not connect the two. I know it took me subsequent passes through the book to pick it up. There are some positives I felt with the art, though much fewer than I'd like. Padilla's apparent tendency towards harsh linework kind of suits the tone of the story, and it does plays well with Rodimus, considering the emotional state he's in. But that's about the only thing I feel like the artist's style did to contribute to the story being told.

I feel like this issue is just as important as the previous was in the completion of the immediate storyline, and so I think that's what disappoints me: this could have been a beautifully rendered character piece in both how it was written as well as visually. But assigning a different artist ended up taking away from what this really could have been. I'd have been hard pressed to choose a "least favorite" issue of this series before now, and it bugs me that this one might end up qualifying. I want so much to really enjoy and be able to praise the issue for what it accomplishes, but I just find it so soured by the lacking visual presentation.