A routine energon gathering expedition takes a turn for the worse as a crash landing strands an Autobot team on an uninhabited planet. ...or is it? Story by James Roberts, art by Agustin Padilla, with colors by Joanna Lafuente. 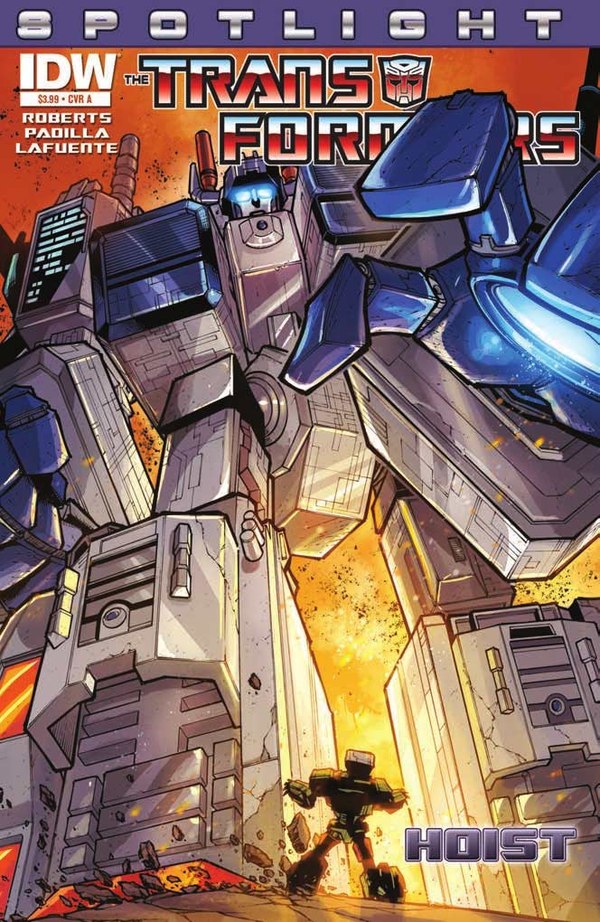 Look out, Hoist! His arm just fell off!

On the surface of the planet Deimus, Hoist flees from Tarn, making a mad dash for his crashed ship. Inside, he, along with Swerve, Sunstreaker, the upper body of Perceptor, and Bob, must figure out a way to escape the planet before their cloaking shields fail and Tarn arrives to kill them. But no contact can be established with the Lost Light, and tensions begin to escalate as the hours pass confined in their tiny ship. How could things get any worse?

I was largely unimpressed with the art in More Than Meets The Eye last week, and Spotlight: Hoist also features Agustin Padilla's work. But in general the result is stronger in this book. I think this probably has a lot to do with the Spotlights having been put together pretty far in advance, compared to IDW's regular Transformers titles. It may have allowed more time to get the pages finished, and so the quality of work could be higher. For the most part I'm okay with the visual presentation of this issue, but there are still problems. Relative scale is absent, which can also be expressed as "Swerve should not be even close to the same height as Sunstreaker". Character models are also not quite right, Sunstreaker being a particular example with a face design that seems to be a throwback to the Headmaster variation from way back in IDW's Furman days. The disturbing permanent, structural frown in the preview pages does not go away. Even though some of Padilla's art quirks are present, the greater whole is a much better product than MTMTE 16.

The story is okay, but a little on the weak side. Putting Swerve and Sunstreaker together in a situation where they have no option but to interact is a really good idea that was executed solidly and is a real highlight of the book for me. Too bad it's supposed to showcase Hoist. A big part of this purpose has to be fulfilled by exposition from Swerve and is mostly an explanation of how he's basically unremarkable, which is immediately confirmed and expanded on by a dialogue bomb from Hoist himself before going right back to Swerve and Sunstreaker. I think it says more about how restrictive the Hasbro-chosen character is here than the quality of the writing that it seems so difficult for the book to really keep paying attention to Hoist. He does have to save the day, but aside from one moment where his engineer skill is used to improvise some basic gear, Hoist is really just there and not otherwise important to the plot. It's not any trait specific to Hoist that lets him save the day, it's just that he's the last able member of his team.

It's a bit of a let down to come to this issue after the great time that was Trailcutter last month. It's clear to me that this is not trying to be that kind of story, but I can't really tell you what kind of story it does want to be. It does fit the Deleted Lost Light Scenes category that I'm all-too-happy to see whenever possible, but it's supposed to be showcasing a toy it will be sold with later and I don't think it does so very well. It feels like it was a struggle to keep on task and make it so Hoist would be the hero even with a healthy dose of plot convenience already working toward that end. I think when I look back on this issue later, what will stand out in my mind is the moments with Sunstreaker and Swerve more than any element of the book's real plot. No surprise, considering the thing Hoist is most remembered for is Hoist Goes Hollywood. ...and maybe that one time he drove Huffer.