As Hot Rod attempts to reconcile the races of Cybertron, countless (okay, about four) Deception subfactions set their sights on the Transformers' homeworld. "Destiny (Part One)" is written by Simon Furman, penciled by Andrew Wildman, inked by Stephen Baskerville, colored by John-Paul Bove with assistance from James Stayte, and lettered by Chris Mowry. 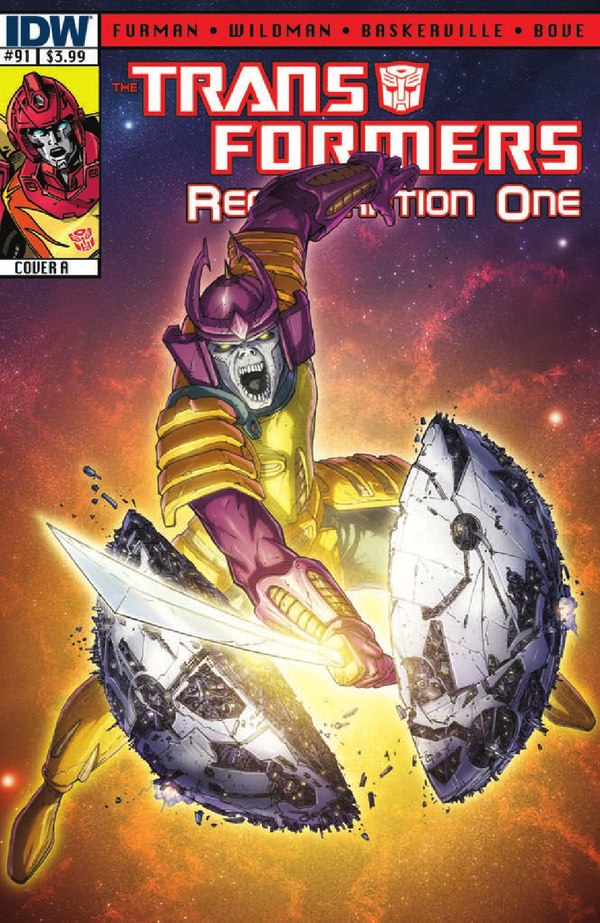 SPOILER: This doesn't actually happen, and I am heartbroken.

Bludgeon demonstrates his new Matrix-residue-fueled Blitz Engines for Soundwave, using the population of the planet Cresta Superior as their target- and Soundwave approves. As the Warworld is much, much slower than Soundwave's own hypercruiser, Bludgeon recommends Soundwave return to Cybertron to further sow discord in preparation for Bludeon's arrival. In Iacon, Perceptor reports to Hot Rod that the Autobots are having a hard time dealing with their temporary cases of Decepticon Thinking. There is much tension, and the overall mood is uneasy. After drilling a series of nigh-identical new recruits, Ultra Magnus speaks with Optimus Prime, who is still on Earth. Magnus is doubtful of Hot Rod's leadership since he was absent for an entire story arc, though Optimus is proud of Hot Rod for being willing to make difficult and unpopular decisions. Case in point: Hot Rod now wants to return to the core to begin the work of reunifying with the proto-Cybertronians. On his way to Cybertron, Galvatron has a series of apocalyptic visions involving Unicron, which is odd since he's not an Autobot leader. But Hot Rod makes up for that by confiding in Kup about his own, Unicron-free apocalyptic visions, which have strengthened his resolve to return to Cybertron's underground. After the public and Kup voice their dissatisfaction with this move, Hot Rod finds allies and reassurance in the Dinobots, who wish to go with Hot Rod in the belief that Grimlock is probably still alive. And somewhere, someone is surveying Bludgeon's handiwork...

Nothing particularly significant is happening in this issue and the pacing I've complained about previously now comes to a complete halt. We get another look at Bludgeon and Soundwave's plans, which we already knew about, and a statement from Bludgeon that I am going to go ahead and interpret as "No, I'm not doing anything for a few more issues." And we then see the aftermath of Scorponok's plan; despite Scorponok's one-panel lip service to the difference between Autobot and Deception being more complex than mere good and evil- which itself was followed by the contradictory faction-swapping Gene-Key - we have the entire Autobot population of Cybertron having a collective breakdown over the possibility that, yes, they might be capable of doing bad things. Then we get Hot Rod having another moment of doubt- being a Furmanian Autobot leader is all about long periods of doubt punctuated by short bursts of certainty and action. (Though when I put it that way, it sounds about right in terms of conscientious leadership.)

In the last two pages we get a look at yet another faction being brought into this, and it's hard to say whether they, Galvatron, or Bludgeon will be the first to blink and actually do something. At the end of the issue the only things that have changed are that Hot Rod is at least aware of what's been going on topside, and Soundwave is headed back to Cybertron ahead of Bludgeon's invasion force- a fact that could've been explained in a single panel. In fact there's very little going on in this issue that should've taken more than a page to explain, and explanation with a few hints of what will eventually happen is all we get. Also, this issue hasn't done a thing to dissuade my feeling that the ending Furman is working towards would've been easier to set up and execute if we'd gotten ReGeneration Two Issue #13 a year ago instead of ReGen One #81. Plus we get another mention of Zero Space (last seen on Free Comic Book Day 2012!), the point at which all time converges, and the fact that it is apparently about to break. I think the idea is that we're getting this parade of Decepticon factions because we're seeing the potential for every possible Bad Ending for the Transformers all at once.

On the bright side, all three of our covers are strong this month. Wildman and Baskerville's image of Bludgeon cutting the planet Cybertron in half is a great, striking image that has no bearing on anything Bludgeon does this issue, or will probably do for issues to come, if at all. Guido's Marvelicious cover is far more interesting than anything happening this issue either, but also a bit abstract. It depicts Optimus Prime looking on in anguish at the people of Earth and Nebulos- two planets ravaged by the Transformers' civil war. It's directly inspired by scenes and dialogue in this issue but it took ExVee reminding me that Fixit there was on Nebulos for me to "get" the image. Geoff Senior's cover is simpler, depicting Galvatron standing in some Cybertronian-looking hellscape, cursing something unseen in the sky- I presume to allude to his visions of Unicron. Galvatron's a character Senior has no shortage of experience with, and it's a simple but gorgeous cover from composition to color. It's a much better apocalyptic vision than what you'll see in the book. Each cover has its own merits, and each is only tangentially related to what you're going to see inside the book.

Of course, if I had to suggest to any of these talented artists an image which was both representative of the contents of this issue and was exciting, I'd be stuck. So it's lucky we have a lot of imaginative cover art this month. Next month's blurb indicates that it's going to relate to Soundwave's mission of screwing things up even more, so I expect it'll be at least another month before any of the main Decepticon villains- Bludgeon, Galvatron, or anyone else -arrive at Cybertron. Next issue marks an entire year of ReGeneration One- put another way, all of Generation Two happened in the time it took to get us to here. And with nine issues remaining I still don't know what the overarching plot is or even what the point of all this will be. Time to start remedying that.