The Transformers: Robots In Disguise #17 - Generation One - IDW Comic Book

So just where was Shockwave during the battle for New Iacon? Our (least?) favorite logician reflects upon his past as he sets a very old plan into motion in "Shockwaves." John Barber is once again the writer with Livio Ramondelli on art, and Tom B. Long on lettering. 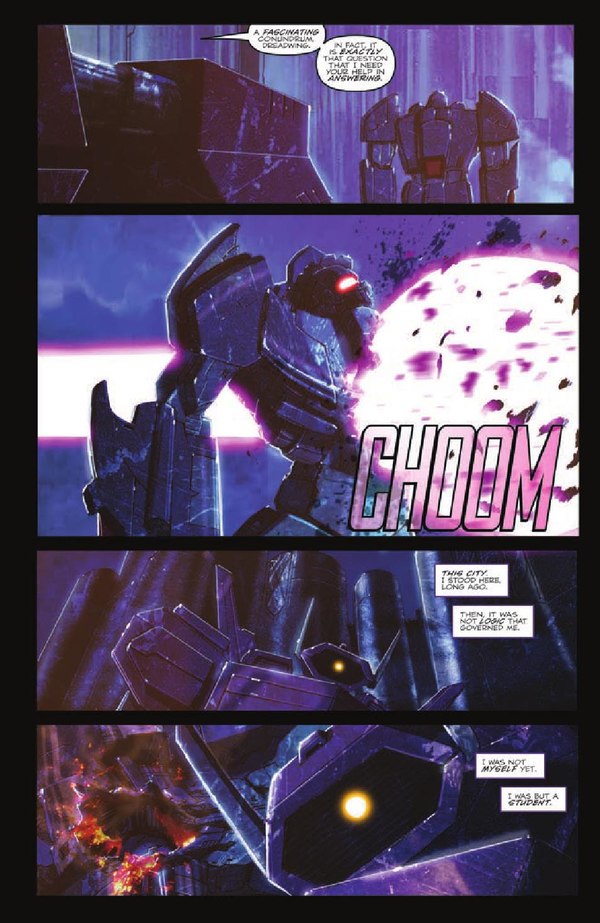 Fleeing the battle of the previous story arc with Dreadwing in tow, Shockwave predicts that Megatron will fail once again as he heads towards the ruins of Crystal City. Once reaching the city, he perforates Dreadwing and reflects on his past: first as Jhiaxus' student in Crystal City, watching in horror as Monstructor and Omega Supreme battle through the city. Then, as the Senator who opposed the Functionist faction of the Senate and their corrupt Primes, and his grooming others (including Orion Pax) to take their place. And lastly his new life as the unfeeling, logical being the Senate made him via Shadowplay, the rewriting of his personality. A meeting with Megatron leads Shockwave to believe that Megatron will be useful, and he agrees to design a more controllable combiner for the Decepticons. But through all of this, Shockwave has had his own experiments and his own plans... and the key to all of them is still here, in Crystal City.

While a lot of what we see in this issue has been at least hinted at elsewhere, it's definitely interesting to see Shockwave's perspective on his own past. While the younger Shockwave is shown as an idealist using his scientific education for good, the Senate's rewrite of his brain takes all of that Shockwave's skills and abilities and gives them focus in the name of dispassionate self-interest. Shockwave chooses to side with Megatron not out of revenge against the Senate for what they did to him, but because Megatron will give him the resources and lack of restraint he needs to run his experiments. There's also some time devoted to an almost, sort-of friendship with then-senator Dai Atlas, and we get to see why he wasn't slaughtered with the rest of the Senate at the beginning of the war. And of course we find out about Shockwave's current plan, a "seed" he planted in Crystal City on the very day Monstructor was set loose by Jhiaxus. What it is and what it does is revealed at the end of the issue, but not what Shockwave intends to do with it.

John Barber's writing remains excellent, and the motivations he gives for Shockwave's actions are entirely logical and believable, as they should be. While in my opinion Barber is just as skilled a writer and plotter as More Than Meets The Eye's James Roberts, I do wish he had that humorous touch Roberts can bring to even the most serious stories. This is my first time reviewing a book with art by Livio Ramondelli and while it's good art, it takes some getting used to for me. His faces in particular remind me of the old Transformers storybooks illustrated by John Speirs, and there is one panel in the beginning of the book where I'm pretty sure Jhiaxus is a Muppet. But there are more strong panels than weak ones, especially a particularly memorable scene of Shockwave undergoing Empurata. Painted comic book art has a tendency towards rendering its subjects sterile; it's extremely difficult to pull off and it's not right for all stories. But the high points here- Crystal City, the aforementioned Empurata scene, Megatron on his throne, Shockwave's final meeting with Dai Atlas- outweigh the weak points by far.

To be honest, the end of the previous issue was kind of a downer if an inevitable one, so I'm happy we shifted gears for an issue. It's always nice to have a sort of palate-cleansing issue after a multi-part story; another old-school comics convention you don't see enough anymore. Next month we get back into the current state of Cybertron with a focus on Arcee, and I suspect we'll waste no time tying Shockwave's Crystal City experiment back into the main plot. Looking forward to it!