The Transformers: More Than Meets The Eye #17 - Generation One - IDW Comic Book

The first of the new five part story arc begins as the strange events and mysterious happenings start to hit critical mass, and something's going to have to give. Story by James Roberts, with art by Alex Milne and colors by Josh Burcham. 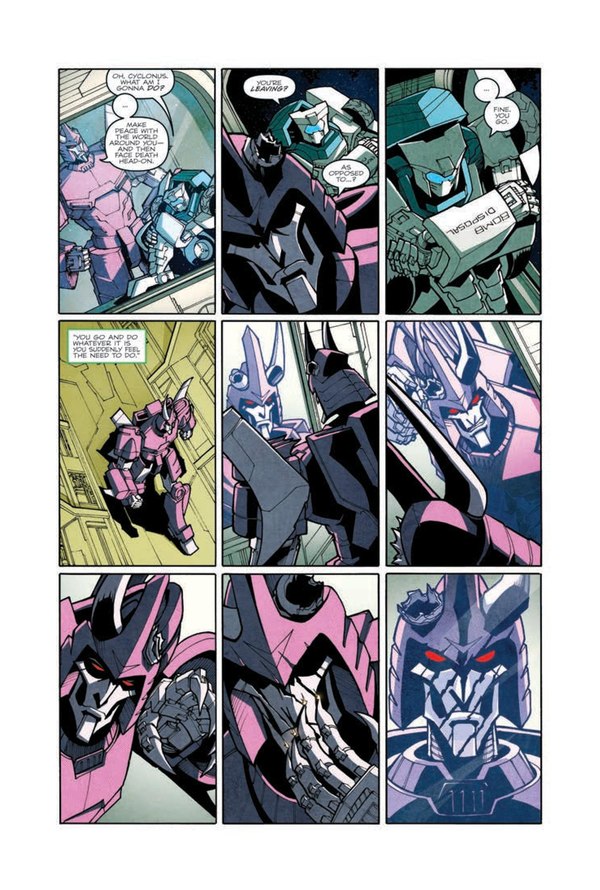 He... has trouble expressing his feelings.

Tailgate looks to Cyclonus for consolation after learning of his impending death by robotic old age, but Cyclonus has issues expressing his sympathy openly. Meanwhile the mystery of Ultra Magnus's disappearance is investigated, revealing strange clues and stranger encounters as Lost Light traces the course of his shuttle through a massive anomaly in space. Mystery piles upon mystery, but more important matters are about to arise for the crew...

I was a bit confused at first because near the end of the issue there's an abrupt and obvious transition in the timeframe that seems to come out of nowhere and had me wondering if a page was missing somewhere that would bridge things. On subsequent readings the process getting to that point becomes clearer, but I don't feel like the distinction between those panels and the "present" setting of the rest of the issue is well established without knowing that part of the end first. I'm torn then between appreciating a method to the writing that expects a reader to go through the book at least a few times to assemble all the clues, or being disappointed that important structuring aspects like that are left difficult to make sense of with a single read.

A lot of things happen all at once in the back half of the book, and even though it may seem to be pretty heavily loaded at first it creates an environment of unease (even before the rather bad things start) and growing mystery that really hooks your interest. ...right before the issue ends and you're left to curse the insufferably slow passage of time until the next one. And as usual we have well done character moments prior to that, especially with Tailgate's deteriorating emotional state as his inevitable death inches closer and closer. One of the biggest credits I can give to James Roberts' writing style is how alive his characters come across, and one of the best times to see this is when one of them is dying.

I'm happy to see Alex Milne's art back this issue. There are some really nice, large panels that are outside the normal realm of the art we see in this book. I don't want to go in to specifics because spoilers, but suffice to say there's some really beautifully rendered pieces in here, helped in no small part by Josh Burcham's colors. The main push of the art is otherwise simply the usual high quality level, but let's just say I appreciate it more this month than most.

Leading off on a five issue story arc is exciting, but also promises a little frustration. Mainly because there's sure to be some things that won't get answered for quite a while yet - and we'll be in this storyline through September. But also with any event piece like this, there will probably be not-fun tolls on the cast that we've spent a year and a half getting very attached to so far. Maybe frustrating isn't the right word. More like terrifying.