As the Dinobots and other abandoned Transformers scrape out an existence deep under the surface of a Cybertron devoid of Energon, dead bodies drained of the vital fuel have begun turning up. How could things possibly get worse? The first issue of Transformers Prime: Beast Hunters is written by Mairghread Scott from a story by Scott and Mike Johnson, with art Agustin Padilla, colors by Patricia Tramontano, and lettering by Tom B. Long. 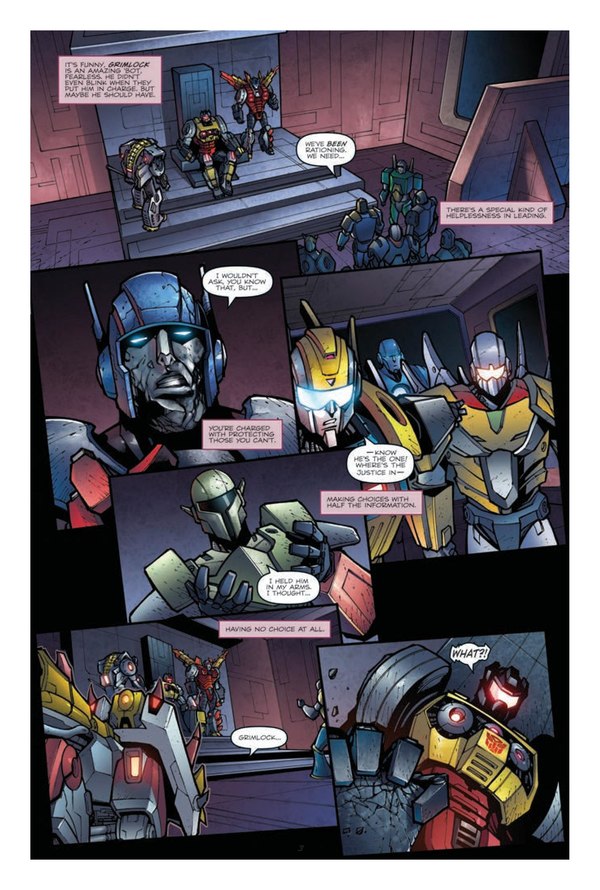 Don't blame me, I voted for Sludge.

After the distant past shown to us in Rage of the Dinobots, we come to the present day. Cybertron is dangerously low on Energon and the remaining Transformers are having to dig deeper and deeper to find any sustenance. Those left behind in the great exodus (as seen in Fall of Cybertron) have gathered in various fortified city-states- and the one our story begins in is ruled by Grimlock. For an emotional and unstable being such as Grimlock, hearing the unresolvable problems and ungrantable demands of his citizens is not just wearying but dangerous for all involved- and Sludge does his best to manage the demands on Grimlock to keep him sane and thus keep those around him safe. While going out hunting to clear his head, Sludge meets and saves the life of an Autobot from one of the other encampments; her name is Firestar and she's come to ask Grimlock for help with a series of murders in her home city. Unfortunately for her, that city is Last Spark, whose governor Airwave wants nothing to do with the Dinobots. While Grimlock refuses to help, Sludge decides to go on his own and Snarl elects to go with him. Airwave is as happy to see the Dinobots as Grimlock was to see Firestar, but after some begging from the other citizens of Last Spark he allows the Dinobots to investigate the murders. The one thing all the bodies have in common is that they're completely drained of Energon, and while Insecticons are the most likely suspects, the methods are too sophisticated for such simpleminded creatures... except for one.

This comic has a lot to establish in a little bit of time, and for the most part accomplishes it admirably. We get caught up on the survivors of the war after Cybertron was abandoned- and man, with all the people left behind it makes Optimus Prime look like a jerk for evacuating and leaving everyone else to go hang. There's also an important question that the book leaves unanswered, which I hope is addressed later on: why Grimlock? Presented as he is here, I really want to see him wearing his Marvel crown. He apparently requires constant management by Sludge in order to be kept stable- but in the montage of requests from his subjects we never get to see Grimlock's responses, which would help solidify the reason he was put in charge. Indeed, the dialogue speaks of the powerlessness of a ruler, but then other than the fact that Grimlock Strongest One There Is, why would you put such an unstable person in charge? And lastly there's Airwave's reaction to the Dinobots and all those "tainted" by Shockwave's experimentation- with the situation as dire as it is, that's hardly a reason to refuse any help offered at this point. For the description of the situation in Shockwave's prisons that seems a reasonable reaction- but millions of years later?

One thing that I mentioned when I was reviewing Rage of the Dinobots is that Grimlock's syntax seemed a bit random. But in the first part of the book Mairghread Scott makes the rules perfectly clear: it's when he's losing control that the classic Grimlock speech patterns come out. There's a panel where Grimlock begins to say "turn" instead of the gramatically-correct-in-context turned, and stops and corrects himself. I like it; it's a very elegant way of handling it within his Fall of Cybertron/ROTD origins. Before the book was released, there was some talk of a long-disused character being brought into the book, and this has turned out to be Firestar. I had no horse in that race (though I wouldn't mind seeing Scrounge and his special arm come back in some form somewhere), and it's nice to be completely surprised by this. Speaking of being pleasantly surprised, Agustin Padilla's work is back to being cleaner and followable- very happy to see him living up to his potential so far. Also, plenty of establishing long-shots- excellent! One bit of staging at the end of the book's a bit rough- there's some misdirection that ironically really needed a focused closeup shot for the followup panel to work effectively -but otherwise his staging is tight here. I'm not sure how much I like the energy fields surrounding the characters as they transform- it obscures things in places -but it's a stylistic choice, and it works okay. Priscilla Tramontano's coloring is slightly more gradated than Thomas Deer's for Rage of the Dinobots, but just enough so. It's not too sophisticated for a comic book and not dragging us into that painterly level of intricacy that, frankly, isn't needed. I also like the contrast she's given most of the scenes, with so much red on the main characters it's nice to have cooler-colored backgrounds so they stand out.

So far, the few apprehensions I had about the Beast Hunters comic have been resolved, and even a few things that bugged me about Rage of the Dinobots. We're off to a good start, and I'm looking forward to the next issue!