The Transformers: Robots In Disguise #18 - Generation One - IDW Comic Book

While journeying into the wilderness with the other banished Autobots, Arcee struggles with both giving and receiving acceptance as Bumblebee clings to life. "Second Exodus" is written by John Barber, with art by Atilio Rojo, colors by Priscilla Tramontano, and lettering by Tom B. Long. 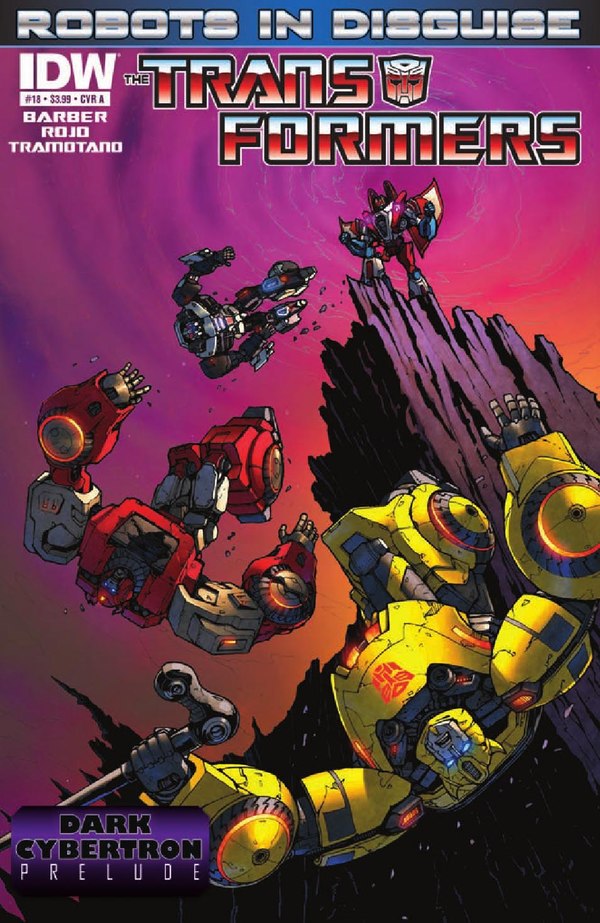 Not the literal truth of what happens in the book, but metaphorically it works. Very Marvel, and in a good way!

This issue picks up from where issue #16 left off, from the perspective of Arcee as she travels with the newly-exiled Autobots. After more detail of how that exile came to be, we come to the present where the Constructicons have caught up with Bumblebee and company- apparently they want to join Prowl, because they've seen how he thinks and they like it. In middle of the argument, Arcee lets it slip that not every secret killing that she and Prowl committed was Bombshell's doing. The shock of this is too much for the wounded Bumblebee, who collapses. The Autobots quickly set up camp and nervously wait to see if Fixit can repair him- Arcee's reception in the encampment is mixed to say the least, but fortunately there are five belligerent Constructicons encouraging her to take it out on them. And in the end, Arcee makes a decision about who exactly she is.

We're back to the present, and I'm really enjoying this issue. It's amazing how much can actually be accomplished without the plot being in motion- it's much more effective to just let the characters interact and deal with what's already happened than it is to sit around threatening to have things happen in a future issue. The focus on Arcee is a breath of fresh air, and her perspective on the situation is unique for a variety of reasons. Whereas the Robot Politics arc was about struggling to deal with the end of war and what comes next, Arcee's problem is taken to the logical extreme of that idea. Life up to now has only made sense to her when she was killing people - Especially Jhiaxus - but she seems to want to change that. While she tries to figure the not-killing part of life out she's confounded by one of the hard realities of being an assassin, that being that nobody really likes having you around when the fighting's over no matter how much help you were. To his credit, Prowl seems to be in no hurry to turn his back on her, but he's in the minority this issue. We also get Prowl trying to cope with the Constructicons' liking the inside of his head- and interestingly he is both the first person to ready weapons as they approach and the one to stop the fighting and ask what they want. As always, character-writing is the book's strength.

Lastly there's Bumblebee, and his health this issue seems to me as though it's setting up something specific at Hasbro's request. I say this primarily because of the book's ending and alternate cover (which you can see a small copy of in the preview gallery). But even if that was the case, Bee's convalescence is used for excellent dramatic effect and gives us the pause we need to give Arcee time to think and characters time to interact. Whatever the motivation for Bumblebee's emergency repairs, John Barber has handled them extremely gracefully and to the benefit of the story. He remains a very close second in my favorite Transformers writers, and is in good company with James Roberts. The art side's in equally good order: Atilio Rojo has inked on a previous issue of More Than Meets The Eye, but this is his first time penciling Transformers. You wouldn't know it from looking at his art, which is clean and sharp, well-constructed and easy to follow. The only thing that looks a little off is Arcee, who is a bit blockier than she ordinarily is drawn. This is definitely a minor issue, and will be even more so if she's not the star of the issue in any other Transformers work he may do. I'd certainly welcome seeing him on any TF comic on the strength of this issue.

This was a great issue, with great writing and art, much better than the previous issue in my opinion. Next month we check in with Orion Pax on Gorlam Prime as the leadup to Dark Cybertron continues, and hopefully we'll get some more information on what's going on and where this is all going. Whether we do or not, it should be entertaining.