Snarl and Sludge face down Kickback, who gives us some answers... and some new questions. Transformers Prime: Beast Hunters #2 is written by Mairghread Scott from a story by Scott and Mike Johnson, with art Agustin Padilla, colors by Patricia Tramontano, and lettering by Tom B. Long. 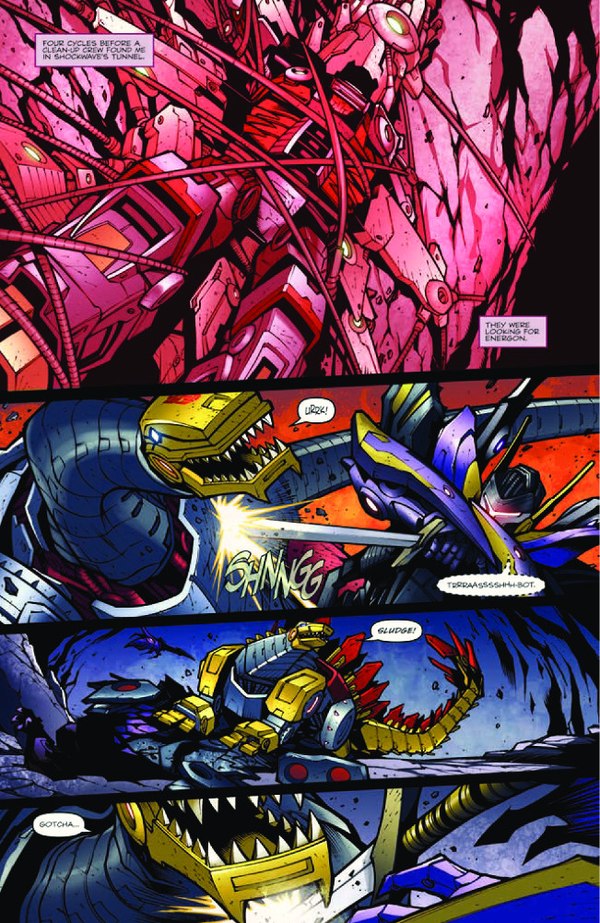 The Dinobot was hung by the Rust Sea with care, in the hope that Jazz and Cliffjumper soon would be there.

As the battle with the Insecticons begins Kickback taunts Sludge- and in the process informs us of how Sludge became a wall ornament in Fall of Cybertron. Sludge shrugs off the commentary, informing us of what happened afterwards via internal monologue, and allows Kickback to get close enough to turn the tables and extract some answers from him. The Insecticons are innocent, and in fact they have been victims of the Energon cannibal too. After dealing with Kickback they give the problem some thought, and Snarl knows where the killer can be found... which is all I can tell you so as not to spoil the ending.

I had forgotten that this book was designed to be made of two-part mini-arcs, reasonably quick stories where you're an issue in either direction away from getting your bearings again. Good plan! Very new-reader friendly, and comics need as much of that as they can get in my opinion. Not to mention that it's refreshing to see a comic not playing the long game for the most part. And the end of the story is a good one, wrapping up the mystery and the conflict between Grimlock and Sludge, both in a satisfying way. Sludge is established in this arc as probably the nicest guy of the Dinobots, the one who worries about other people and is trying not to let the bleak current state of Cybertron break him. I like that- every group needs a conscience, and if Sludge had any kind of established personality in any continuity before now, I don't know of it. The final reconciliation between him and Grimlock is nicely done, and is about what you'd expect from two robots working to suppress severe emotional issues. Not exactly heartwarming, but as close as you'll get between these two. We also get one of the driving forces behind Sludge's insecurity: the fact that he was left behind after his body was found in Fall of Cybertron. Considering Jazz seemed to believe he was dead in the game, it's not too much of a surprise they wouldn't go looking for him. Wouldn't make me feel any better about it if it was me, though.

Mairghread Scott has written three of the best episodes of Transformers Prime so far- Faster, Stronger; Hurt;and Chain of Command -and so far Beast Hunters is much more in line with those than I felt Rage of the Dinobots was. In every medium and every format there's a certain amount of settling in that occurs, so it's probably best to look at ROTD as the warmup. She has a better grasp of character writing than most of the other Prime writers in my opinion, and given the space a monthly comic offers I fully expect all five Dinobots to be completely fleshed-out personalities by the time the series is over. Agustin Padilla's art here is about the same as last issue, though I do have a little trouble following the fights in places due to some of the usual issues of staging- closeups of Snarl and Sludge right next to each other at very similar angles were the most problematic bit. It's not too tricky yet, though I'm hoping the monthly schedule won't be too much for him- he's a pretty good artist when he's not rushed. He also shows a lot of fondness for rendering things in silhouette or shadow in this book- mostly silhouette, but some of each. It generally works pretty well and is entirely suitable for a book that takes place in the underground of a destroyed world, though in the long term I'm concerned about the overuse of it for effect. If he's still doing at least this well by issue #4, though, I'll be pleased.

Our first story is over, and it'd make a pretty strong episode of the TV show, so we're off to a fine start. Next month I believe Mike Johnson will be doing the scripting, so I'm looking forward to seeing his take on the current state of Cybertron.