The future of Autobot society may lie in the hands of a freshly restored Blaster, while Optimus Prime tries to save another that wants nothing more to do with Transformers. Written by Simon Furman, with pencils by Andrew Wildman, inks by Stephen Baskerville and colors by John-Paul Bove. 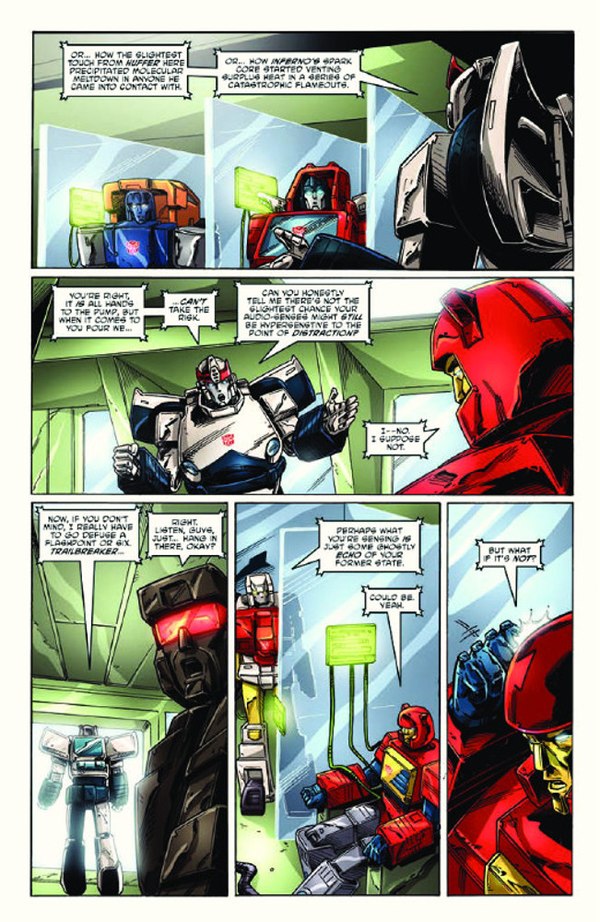 And it only took six months to learn what all their Nucleon side effects were!

Optimus Prime is nearly destroyed while trying to plead with Spike for audience with the survivors on Earth, only to be saved by the arrival of Spike's wife. Optimus wants to bring the humans to Nebulos, believing the two damaged civilizations can work together to recover and move forward after the damage Cybertronians have caused both societies. Meanwhile on Cybertron, growing unrest threatens to destroy their society, not helped at all by the police state mentality being adopted by Kup. Blaster, Silverbolt, Huffer, and Inferno have been upgraded to new bodies by the same process that restored the Dinobots. Prowl insists on keeping them isolated in case of side effects, but they may be the only hope for restoring order to Cybertron after Blaster intercepts a certain signal and becomes a target for a new Mayhem Attack Squad.

There's not much I can do to sugar coat this. I've felt Regeneration One to have serious flaws for a long time, and I have generally felt more dread towards its coming than anything else. But issue 92 actually hit me quite a bit more positively. This issue has a feeling of breaking free of the five issue story arc structure that the book has adhered to thus far. It may be a fluke of bridging between two plot lines, but this book had a strong feeling of telling a complete story all on its own rather than being just a small portion of a story that has been woefully decompressed to fill a predetermined length. There's an immediate peril presented, and in the process explains away some of the fallout of the previous storyline that just came across horribly as it was originally presented, a small group of characters act, and the matter is wrapped up by issue's end. There are linking aspects to what came before and what will be next issue of course, but this has a satisfying feel of actually accomplishing something. I can even look past the resolution being executed somewhat weakly since usually four out of five times there would be no resolution of any kind at the end of an issue.

I think what's happened here is that the book has hit the kind of pacing you'd have seen in a comic at the end of the 80's or early 90's where the bulk of story is told in one issue with bits and pieces that transition to the next month. This issue feels so much more like period Marvel than anything else in the series has, and that's at least part of what I want out of it. I'm not saying that the series has graduated to high literature, but if it's at all possible that the book can go from here and maintain a similar sort of structure as a matter of normal course, I can easily see myself coming around to enjoying what's left of the series.

This is the last issue to feature Wildman's art before the end, and I think he made a good showing before moving to a different project for a little while. Wildman's art is usually technically fine, though I'm not the biggest fan of the style. There's a few action panels that I felt turned out pretty nicely, and just in general a number of places where I felt like a panel was laid out well. There was a classic enough composition a lot of places, but as has usually been the case for me, I feel like the coloring is too intense and heavy to suit the art, and that seriously detracts from the overall experience. Earth is devastated, Cybertron is usually seen at night, and in neither of these cases do very rich, saturated colors feel appropriate.

Let's just say I was very pleasantly surprised in reading 92. I was expecting a case of having to bear through one more issue before the art changes hands to Guido, but I actually ended up enjoying reading this. Give me this kind of scripting along with Guido's excellent Marvel-style art and there's a good chance I'll be sold on the book again.