With Megatron defeated, Optimus Prime has a once-in-a-lifetime opportunity to unite the disparate factions of Cybertron. But the Decepticons are still out there... and defeated is not dead. Monstrosity #1 collects the first three chapters of the digital comic written by Chris Metzen and Flint Dille with art by Livio Ramondelli and lettering by Tom B. Long. 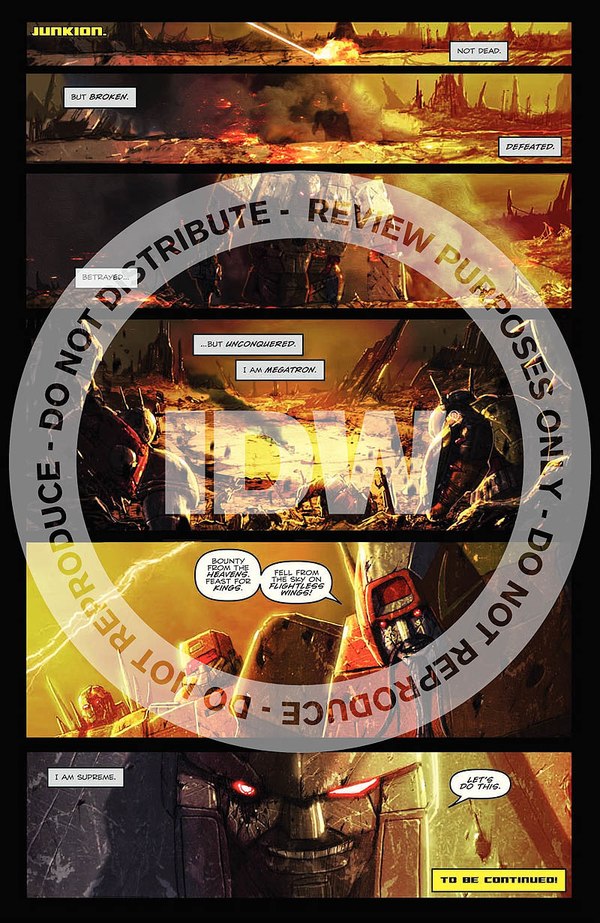 Wheelie used to speak in rhyme, but Wreck-Gar got that gig this time.

Grimlock and the Dynobots execute a successful heist, but the take isn't what their source Swindle promised. The Dynobots are getting desperate to leave Cybertron, seeing themselves as threats to everyone on the planet otherwise. Optimus Prime is trying to win the approval of the Senate and build a coalition government, but many are skeptical- most notably the peace-loving Dai Atlas. Megatron, barely functional after a battle with Optimus Prime, is banished by Scorponok to the no-bot's-land from which few- if any -have ever returned: the planet Junkion.

This comic collects the previously online-exclusive Monstrosity, with this issue containing three complete chapters. It's got potential- Robots in Disguise did a good job with making Robot Politics interesting, so I'm fairly receptive to that angle of the book. It's also fairly unusual to have Megatron off on his own. That's usually more an Optimus Prime thing, so there's the potential to add some insight to him. Having come back into Transformers comics after Autocracy, this is my first run-in with Flint Dille's writing since the `80s. He and Chris Metzen do a pretty good job here, though they're kind of dipping into the Transformers: The Movie well pretty heavily. Among the recycled TF:TM plot bits we find Junkions, Quintessons, and the "Wait...! I still function!" scene with Scorponok substituted for Starscream.

More tricky though is that the book's voice doesn't mesh with the rest of IDW's current output as well as I might like. One of the things that's kind of weird about having multiple writers approach the same characters is the shift in tone and characterization; it's a problem Marvel and DC have very frequently, but this is one of the first times I've come up against this in IDW's Transformers work. Since Roberts and Barber use different sets of characters and Barber is Roberts' editor, there's plenty of time to get their ducks in a row. Though Barber is the editor here as well the ducks don't feel quite so precisely aligned. The one that seems jarring to me is Dai Atlas, who didn't seem quite this excitable in my limited exposure to him in Robots in Disguise #17. Maybe getting shot by Shockwave made him cranky. The rest of it is the feeling that the characters are speaking with different voices than the ones I'm used to even if their motivations remain the same. Mainly it's a question of style.

Livio Ramondelli's art remains something that never sits quite right with me. I respect the skill of it and it's largely well-staged, but painted comics just look odd to me, usually. There's also some places where coloring choices could've been better, and we could have a touch less light bloom. Specifically, it took me entirely too long in one panel to figure out that the gray mass around Swindle's gray head was Grimlock's hand. The lighting and zoomed-too-far-in nature of the shot obscured its purpose. There's also Grimlock's design, which is the War Within version and its unpleasant chunkiness, which gives the production an air of Dreamwave art with an extra layer of polish. Also, Bumblebee is a yellow Cliffjumper (that's a switch from the usual toy goings-on!) and I'm not sure if Grimlock ever has the same head design from panel to panel. Going by RID #17, I know Ramondelli's better than we're seeing here. Which is not to say that there aren't some great scenes and panels- most of them involve Megatron and his travails on Junkion and I would probably be just as happy to see all of that collected into a single book on its own.

Monstrosity fills in some interesting blanks in IDW Cybertron's history, and it's kind of nice to get three complete chapters at a time. While the "feel" is off compared to the mainline IDW books, this has some potential.