The Transformers: More Than Meets The Eye #18 - Generation One - IDW Comic Book

Remain In Light continues as the crew of the Lost Light find precious few answers, all of them only raising more questions as the mysteries of Luna-1 continue to deepen and the crew's situation worsens with every passing moment. Story by James Roberts, pencils by Alex Milne with inks by Brian Shearer and colors by Josh Burcham. 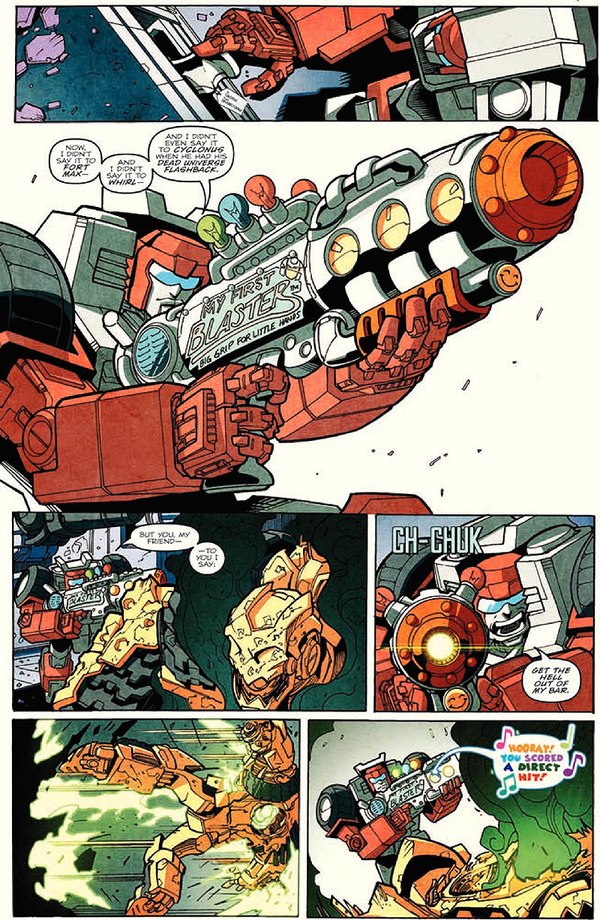 On Lost Light, the crew struggle to repel the invading Legislators with little success. The party on the moon is pursued by Lockdown's Decepticons to a Metrotitan graveyard where most everyone is captured. ...and brought before Chief Justice Tyrest before being imprisoned to await trial. As Rodimus finishes recounting events to Ambus, Rung begins to question whether their cell mate is what he claims to be. Meanwhile, Ratchet is in Pharma's custody, and the "mad doctor" is all too eager to exercise his frustrations against him.

This issue is mainly a bridge for the storyline, not especially advancing the plot aside from a couple of reveals that open more questions. With next issue being promised as "Answers" there is the hope that most of these things will make sense by the end of next month. Some points of interest see that Swerve's bar was outfitted by Brainstorm for added "security", complete with a special rifle designed just for Swerve - likely in response to the Shoomer incident several issues back. Skids also details his "outlier" trait (such status having been established in the Shadowplay story arc) as being an exceptional talent for learning. Certainly useful in his official field as a theoretician, but as we've seen in the course of the series Skids has obviously also applied that talent to combat arts. It's certainly proven here with Skids having the most success in fighting the Legislators off. The Metrotitan graveyard calls back to Spotlight Trailcutter when Lockdown explains his group's pursuit of the massive Transformers, although in context with the rest of this issue the particular reason for hunting them down may not be as obvious as it once seemed. It was pretty clear as soon as Pharma appeared at the end of issue 17 that bad things were in store for Ratchet, and the followup is quite a bit more disturbing than anything I was expecting to happen. Though considering work Roberts has done in the past, it's completely within the realm of his style of writing.

Art credits are split this month between Alex Milne's pencils, inked this time out by Brian Shearer. There's a few places where the action gets a bit muddied with complexity and some crowding in the panels. This is especially a problem in the page with single panels showing the fighting aboard ship. Since there are a lot of action elements to depict early in the issue it may just be a matter of what page space was available and the art needing to compress accordingly to make sure those important establishing panels could have a place. On the other hand, the Metrotitan splash page was rendered beautifully by all involved. Great lines and inking plus a fantastic execution of the lighting in the coloring stage by Josh Burcham that gives a severe harshness and emphasizes the lifelessness of the bodies. The very next page clearly had similar care put to the background elements, but again found it sadly muddied by the presence of a lot of active foreground elements that just don't seem to come out as good in comparison.

It's interesting the contrast I feel between this and any given issue from the first year of Regeneration One. Right now with Remain in Light set up as a five part storyline, it's certainly comparable to the way ReG1 has been structured. In both cases there are distinct parts of the respective story arcs that have little or no advancement for the plot. But where Regeneration feels like it wastes the reader's time by drawing out the events to a given length, More Than Meets The Eye is making sure to keep every issue full; if not with plot development and/or resolution, then with character moments like the ones I described above. It's a balance of goals in the telling of the story, very nicely splitting between the destination and the process of getting there. This issue is more about the journey, and while there's a natural frustration at going another month without much explanation of what's happening, it's a kind of frustration that comes with really good writing. It's the frustration that comes from having to wait for the next installment to find out what happens to the characters next, rather then the frustration of waiting for something to happen to the characters at all. I'm the type that wants a lot of answers up front, and even I can't help but enjoy the process of slowly working towards them that we're getting. Darn that James Roberts, always leaving me wanting more!