It is the year 1987. Simon Furman has taken the editorial reins on the UK Transformers weekly comic and made the future world of 2007 his own personal playground. A perfect time for the accidental creation of Death's Head, yes? The Transformers: Classics UK Volume 4 features scripts by Furman with art by Geoff Senior, Will Simpson, Dan Reed, and more. 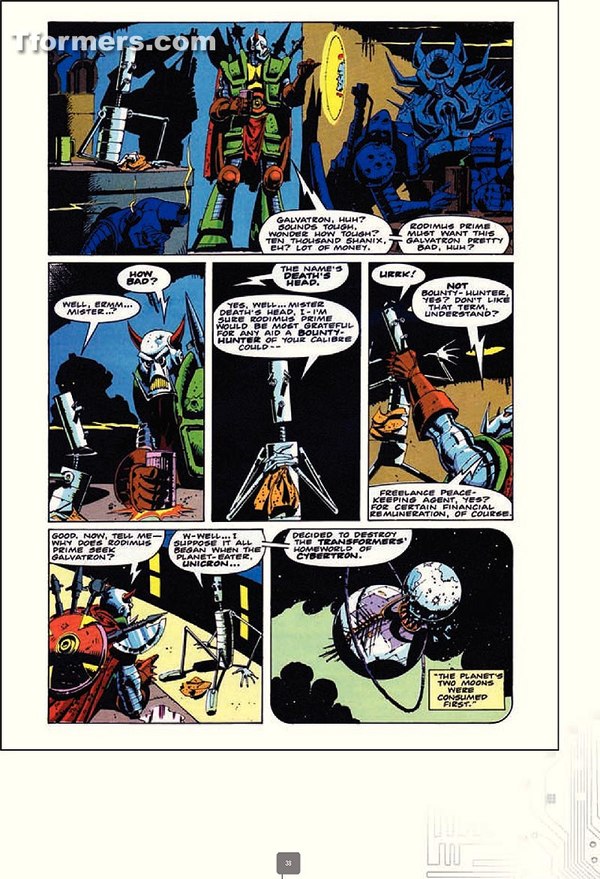 Still waiting on the Death's Head Marvel Universe figure. Do a Legends while you're at it, Hasbro!

The book begins with a healthy amount of historical context on the state of Transformers UK, which at the time was Marvel UK's biggest selling book. Editor Ian Rimmer left to do more writing, and his former assistant Simon Furman was recalled from his first-ever editorial gig at Thundercats because he's the only person with enough knowledge to do the book justice. As both editor and writer, with the book's circulation above 200,000 - this being comparable to current bestselling US comics' sales except in a country maybe a tenth the size of the USA - Furman enjoyed an unprecedented amount of freedom in his work on the book. This was aided by the fact that nobody else in the world was touching the post-Transformers: The Movie storyline, so he was beholden to no other continuity there. It's in this atmosphere that Death's Head, his enduring contribution to the Marvel Universe, was created. Death's Head began as just a generic bounty hunter that artist Geoff Senior was instructed to give a skull-like head. What Furman got back was so full of personality that he rewrote Death's Head's dialogue to tailor it to the appearance, and so the character was born.

This book covers from #113's "Wanted: Galvatron- Dead or Alive!" through the Transformers/Action Force(GI Joe) crossover on to #145's "Stargazing" (A Christmas story starring Starscream) and the 1988 Annual, which was published in 1987. There's a lot of material in here, a lot of complete serialized story arcs, and as with any serialized comic done by a variety of artists the quality varies pretty widely. As always Geoff Senior's art is the standout here, and has that quality of being sharp-edged and geometric without being lifeless. Of the classic TF artists Senior remains my favorite on either continent's comics, and this is possibly the height of his work on Transformers. Former US Marvel artist Dan Reed is also in good form here; in the supplementary material he recounts being asked to tone down his Kirby-bubble infused transformation panels, but I have to admit that I kinda like those.

Supplemental material is in good supply here general, with lots of essays, material from Furman and quotes from most of the other people who worked on the book at this time, as well as the UK version of the Transformers Universe profiles. At over 300 pages the book is a very substantial package for $25, and while the comics are reproduced at a smaller size - approximately 6x10, and UK comics were originally printed larger than their US counterparts - the reproduction is excellent, significantly better than the older Titan books reprints.

The UK Transformers comics represent an entire other world when compared to the US Marvel run of Transformers, an alternate continuity full of alternatingly complementary and contradictory storylines. Your choices for getting these in collected form are the older, out-of-print Titan collections or these newer IDW volumes. Reproduction size is about the only thing the Titan books have going for them as compared to these: IDW gives you more historical context, more extras, more comic pages per dollar- and has the added benefit of actually being numbered, which trade paperbacks had a strange aversion to for many years. IDW's given this material the best treatment it's yet seen, and for any fan of Marvel's Transformers or Simon Furman's writing, this is definitely worth a look.