The second issue of Monstrosity's print edition covers three chapters of the digital comic written by Chris Metzen and Flint Dille with art by Livio Ramondelli and lettering by Tom B. Long. 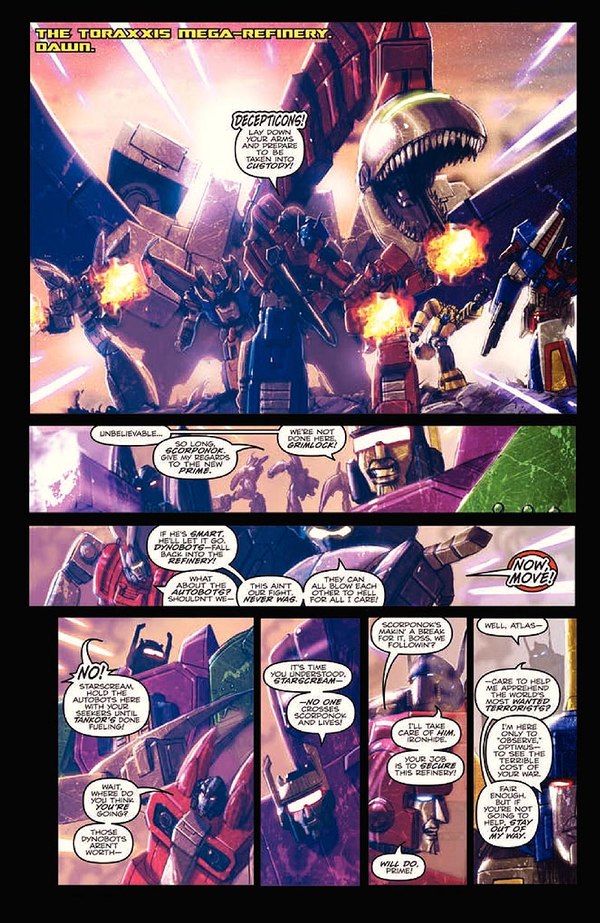 Sadly this chase will not be as wacky as the setup has potential to be.

The refinery heist goes bad as the Dynobots and Scorponok's Decepticons are interrupted by Optimus Prime and the Autobots, along with observer Dai Atlas. Grimlock pulls his team back into the refinery to leave Prime to deal with Scorponok, but the Decepticon leader has other plans as he pursues Grimlock. In battling Scorponok, Grimlock slips into some kind of extremely pointy (or is that pointily X-TREME!) Berzerker Mode. Optimus Prime arrives and breaks up the fight- but when he declares his intention to arrest the Dynobots, Grimlock threatens to deactivate the refinery's fusion regulator and blow it to bits. Optimus talks him down, but Scorponok is not burdened with Grimlock's flaw of compassion.

As with last issue, the synopsis here only covers the first chapter in the book. That chapter brings the first act to a close, and the rest of the book largely focuses on the aftermath of the Toraxxis mega-refinery explosion. With Megatron's trek across Junkion interspersed, of course. The theme of the book is monsters, and they are represented in all shapes and sizes between Scorponok, Grimlock, Megatron and the monster at the end of this book. SPOILERS: it is not Grover. Meanwhile there's Dai Atlas, whose exodus from Cybertron cannot come soon enough. He seems to insist that the war is Optimus Prime's fault, though he did not start it or create the circumstances behind it. As shown in this story, he is a tiresome nag and that is all.

I'm getting used to Metzen and Dille's writing style at this point, and it's pretty pleasant reading. In addition to his work on Transformers, Dille used to work for TSR, the owners of Dungeons and Dragons, and there's some moderately florid prose in here that would not look out of place in their fantasy settings. The issue also has more of a Star Wars feel than Transformers: The Movie between Perceptor's risk calculations and Ratchet straight out saying "I got bad feeling about this." The art is pretty much the same as last issue's: great finish, nicely done mood lighting to delineate scenes and locations, some really nice dynamic panels. But beneath it all I'm still not in love with how Livio Ramondelli constructs his robots, which really does hark back to the Dreamwave era. Very chunky, oddly-proportioned robots in many cases, often built with the old `90s trick of making the head small to make the robot look relatively huge. That's largely a question of personal taste, though- Ramondelli's art rarely needs a second look or close examination to clarify what's going on, and that's up there with the most important qualities a comic artist can have.

We're now about halfway through Monstrosity, and the main players for the finale are becoming clear. How those players will collide is still up in the air, but at 10 installments of 7 pages each, there's not a lot of time to waste until we find out. Fortunately this book is pretty good at keeping things moving, so we'll likely find out next month. (Or probably already have found out if you went with the digital release!)