The Transformers: Robots in Disguise #19 - Generation One - IDW Comic Book

Orion Pax and his team discover Gorlam Prime to hold secrets and hidden dangers everywhere. But the greatest threat may come from the least expected place as Jhiaxus acts to move his plans to their final phase. Written by John Barber, art by Dheeraj Verma with colors by Joana Lafuente. 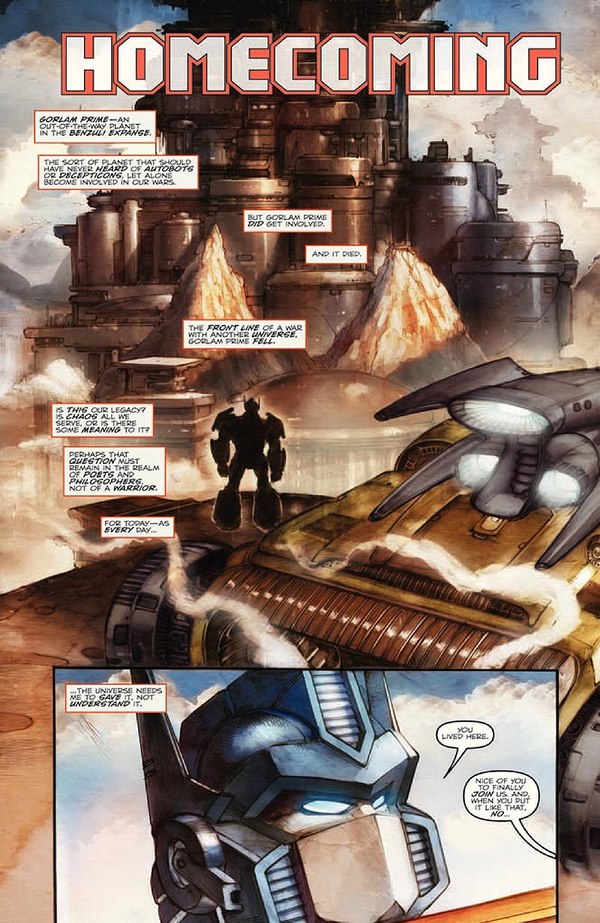 No matter what else, there's some great art to see this issue.

A former Titan Hunter recalls an encounter with a Metrotitan, resulting in the discovery of an ability to control the destination of its space bridge, an ability Jhiaxus and Bludgeon are very interested in. Meanwhile, Orion Pax, Hardhead, Wheelie and Garnak have arrived on Gorlam Prime in hopes of catching up to Jhiaxus. But their exploration of a Cybertronic cityscape is interrupted by the Monstructor Six in hot pursuit of Waspinator.

What stood out most to me in this issue was the art. The Orion Pax storyline has maintained a unique art style from the rest of RID with Livio Ramondelli's painted style. This issue brings in Dheeraj Verma for the art, bringing a fresh concept to the look of this story in the combination of his really nice linework and Joana Lafuente giving the colors a painted appearance to keep a visual consistency. I find that these two work really well together. Verma is very strong with composition and keeping characters consistent, and Lafuente's colors make it come alive with that atmosphere Ramondelli's work has always leaned in to. But it's all so much more clean and readable. I really like that one of the hooks of this story arc has been the painted art, and with these two a fantastic balance has been reached between achieving the style while keeping everything very visually clear. This is a pairing that I want to see more of in the future. The bar scene in the beginning is dark and moody, but the art doesn't become muddy or lost under the lighting effect. Landscapes are simply beautiful with the fine details from Verma and the richness of the coloring, and the full page art on the last page is just enjoyable to look at.

The story is a little thin, though. With things needing to build toward the major event in a couple more issues' time, it's no surprise that we might get issues that mostly act as stepping stones to that end a little more commonly. And this issue really did only serve to deliver a plot device for later use in the "real" story, and directing Orion Pax and his team to finally head back home. There's an odd turn or two in the way parts are written. For instance, at one point Orion dismisses something Hardhead is saying in a way I interpreted as being very curt, inappropriately so for how you'd expect even a former Optimus Prime to act. And the only reason it feels like it happened was to make sure the character didn't learn an important story detail that the audience is already aware of. It just feels wrong for one of his group to ask Orion a question and his response to be "I don't care." But most of the issue just feels like killing time with a side of plot convenience. Most likely this is the end of the Orion Pax side story element of this title at least until next year, and it's sad to see that he and his team end up getting sent home in the weakest installment. I get the feeling this was written to be taken as a very significant event, a titanic threat that drives them all back to Cybertron, but it falls flat for me. I don't feel urgency or panic. I only feel like they're here to fulfill a role in the story and nothing more.

But, at least it's pretty to look at.