Grimlock and Swoop head out on patrol and forcibly relieve a group of Shockwave's Forged digging for something... but what is it they expect to find? Transformers Prime: Beast Hunters #3 is written by Mike Johnson from a story by Johnson and Mairghread Scott, with art by Agustin Padilla, colors by Patricia Tramontano, and lettering by Tom B. Long. 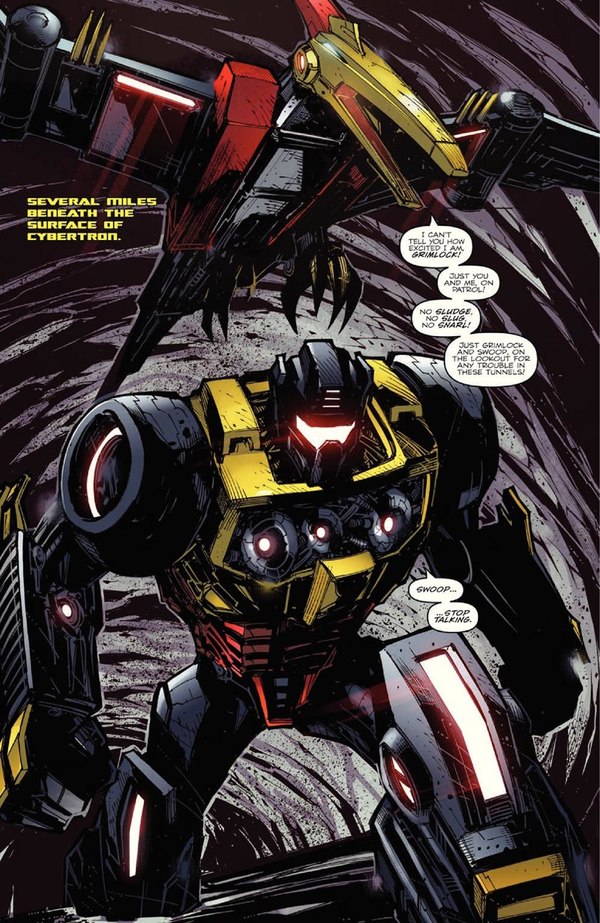 First, we get a brief prologue explaining the connections between Cybertron and Earth- and Shockwave's curiosity about the distant planet. Then in the present, Grimlock and the talkative Swoop patrol Cybertron's tunnels together. Before Swoop can ask if Grimlock would like him to find a cat to beat up they run across the next best thing: a group of Forged excavating something and clearly doing so on orders from soneone. But before any more can be found out, Swoop rushes in and engages them- and gets himself hurt. Grimlock finishes the fight, and they keep digging to find out what the Forged were after. Back in Last Spark Sludge and Snarl do what they can to help the city in Airwave's absence. They're approached by Zoom, a young and talkative Autobot who wants to patrol with them. Before Zoom can ask if Sludge would like him to find a cat to beat up, Sludge cuts him off by dramatically transforming to Dino Mode and brushing him off, saying he's not ready. Back in the tunnels Grimlock and Swoop find a secret chamber- they're not sure what it holds, but some of the materials are organic...

This issue moves pretty briskly, which is nearly always a positive thing in a comic. We get some focus on Swoop, and he tends to get ahead of himself. Which for the party flier seems plenty appropriate. We're given a parallel- down to the name -in the character of Zoom who I expect will figure into the story more than just his single-page appearance here. Mike Johnson and Mairghread Scott are plotting the series together and taking turns scripting two issue arcs; this is Johnson's first time at bat. I like his pacing here, as I mentioned before- and as with his comic story that became his Prime episode "Out Of The Past," he's pretty good at snappy dialogue during fight scenes. I like the contents of the secret chamber- which I'm not spoiling here -and I'm looking forward to seeing how it comes out next issue.

The art is looking rushed in places but is still decent. Padilla's use of shadow, besides expediting things for him I'm sure, makes for some really nice images like the opening splash of Grimlock and Swoop on patrol. Strong individual images are really Agustin Padilla's strong suit, as though he's storyboarding an episode of a TV show- which works pretty well for a TV spinoff book. He's still having the problem of staging things too close and too tight during fight scenes- it's not that the battle with the Forged isn't followable so much as the images aren't the best and clearest way to choreograph the fight. Perspective and details get wonky in places throughout the book, particularly in places where the angle of the panel is severe or unusual. The shape and location of Grimlock's "ears" are pretty fluid depending on the panel, for example. And there's a high shot that looks off to the point of cubism. Also Padilla's "generics" are just a little bit too. Zoom's chest in particular has a few scratchy, light details that look like they were abandoned because the artist just ran out of time. My prediction was that time management was going to be Padilla's greatest challenge on this book, and this is about the point in Rage of the Dinobots where he really seemed to lose focus. I understand and respect the ability to keep the deadlines no matter what, but the work is starting to suffer- it could be a good time for IDW to call in an inker and reduce his workload.

That all said, it's a fun comic! I can't tell you the best part of the issue for fear of spoilers, but take a look at the last five or so pages in the shop if you can- for all the flaws I've mentioned Padilla nails the big reveal, and the following scene is pretty entertaining. Next issue should be too, as I imagine we'll get explanations as to how exactly all this happened. The pacing and the strengths of the art definitely make this comic worth a look, and I'm hoping those strengths will continue to outpace the weaknesses.