The Transformers: More Than Meets The Eye #19 - Generation One - IDW Comic Book

Answers as promised! The Divided Self reveals the truth about things you thought you knew and sets off toward the conclusion of Remain In Light. Story by James Roberts, with pencils by Alex Milne, inks by Brian Shearer, and colors by Josh Burcham.

Ambus fills in Rodimus and the rest of the imprisoned crew on what being Ultra Magnus really means before leaving to directly confront Tyrest about what he's planning. Ratchet tries to talk his way out of the care of Pharma, but in the process becomes locked in a game that may claim innocent lives in order to keep his current pair of hands. Meanwhile, Cyclonus and Whirl make a vital discovery while searching for weapons with which to stage a jailbreak. 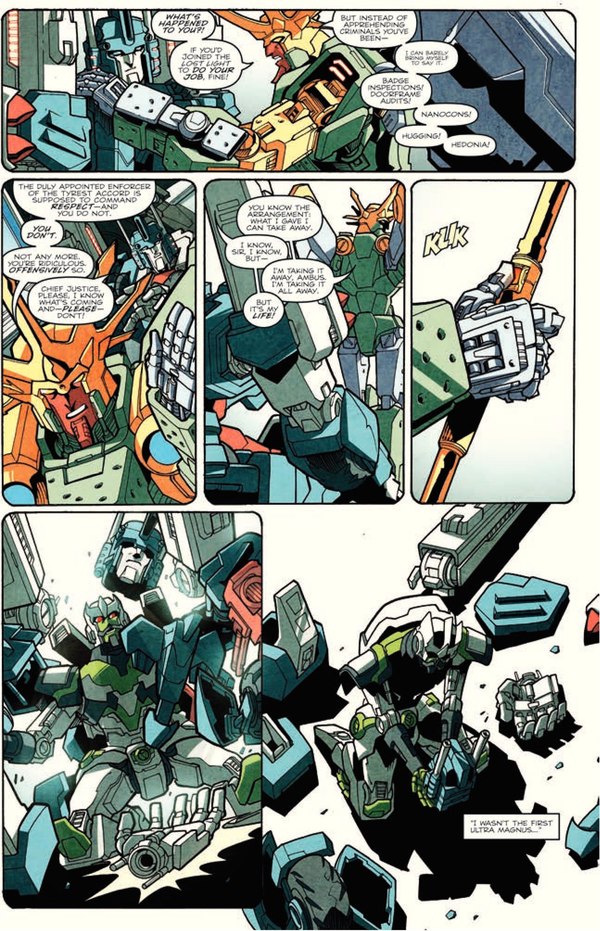 As each issue of this arc comes out, I think more and more that this will be extremely satisfying to read collected in a trade. Last month was a little bit on the idle side and while we're still building to the climax this month, it's definitely closer to that side than the beginning just in the sheer density of happenings within these twenty-ish pages. There are indeed answers this month to a number of prominent questions, especially details around Ultra Magnus that bring the flashbacks from issue 16 in to a clearer context. Other things are also revealed and explained, but I'm hesitant to even reveal the basic nature of them because just that much might ruin vital pieces of the surprise. What I can say is that this issue is satisfyingly full. I spent at least half an hour on my first reading of 19, and that's something I basically never manage with any current comic. But to even start to properly absorb and process all of the details presented this month requires such a wonderful commitment of time that I'm all too happy to make because that is just such a rarity.

Alex Milne is frustratingly consistent on art. Frustrating from the stance of a reviewer that needs to talk about the art in a book, that is. As a reader it's beautiful to be assured of the same level of fantastic visual presentation from month to month. Notable at least is where last month had some panels that seemed crowded and a little hard to read as a result, everything's better spaced out in this issue. My attention was also drawn by facial expressions. Pharma has a frightening range of expression this month just as one example. And those in particular are helped by Brian Shearer's inks. Before I even realized the art duties were shared here, certain shading stood out to me, and believe me it really sells some panels. Milne and Shearer compliment each other beautifully in the line work, all brought together with Josh Burcham's colors. While the slightly desaturated colors are not usually my favorite, the feeling I can only call sterile perfectly suits the environments the majority of the issue is set in. The impression of harsh fluorescent light is just so right for this.

But to what I was saying before, I think the TPB format will be good for this not because I think the storyline is being designed for a collected volume. Quite the opposite in fact, as it's absolutely stuffed to capacity with substance. A trade will serve this storyline by letting a reader consume the whole story from start to finish at once. As much frustration as I may feel when it comes to the end of the issue and I have agonizing weeks to wait before my next installment, I'm sure it must be difficult on James Roberts to have to divide the story swimming about in his head to fit the monthly format. Roberts is well known in Transformer fandom as a novelist, and Remain In Light is presenting to me in exactly that way so far.