The Transformers: Robots In Disguise #20 - Generation One - IDW Comic Book

The Long Night, The Young Evening, and The Early Dawn. Three Monologues that see Starscream through his first hours leading Cybertronian civilization through the far more mundane than exiling the warring armies. The beginning of a new Starscream, or just business as usual? Written by John Barber, with art by Andrew Griffith and colors by Priscilla Tramontano. 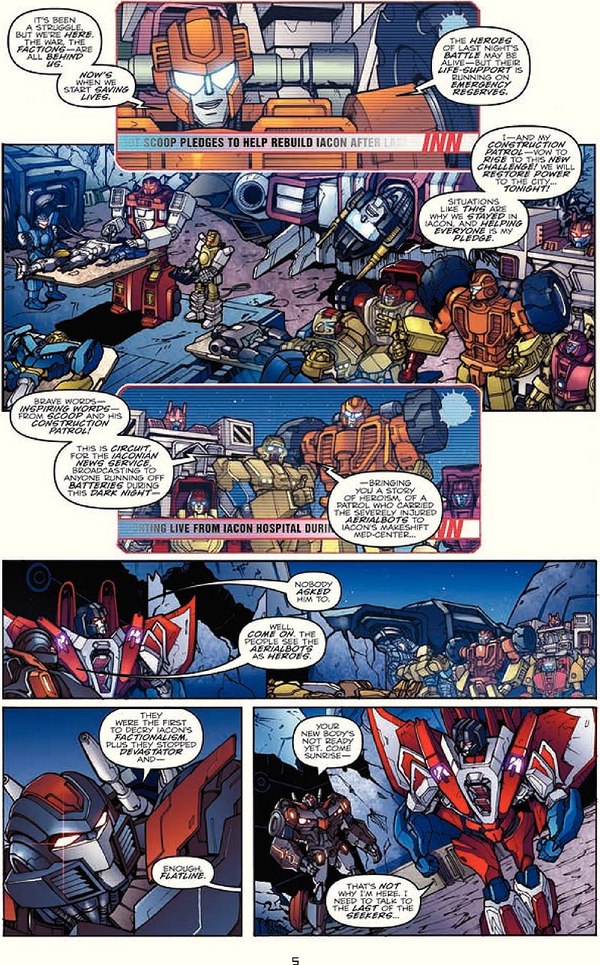 Starscream attempts to enlist the support of different elements of Iacon's population, but his talks with Blurr are cut short by a power outage. Scoop is on the job, though, repairing not just the power supply, but working through the night to see other important services restored. Starscream grows a quick resentment for the helpful laborer who is quickly becoming Iacon's new media sensation. But afterall, what are people in the way if not stepping stones to one's own personal advancement?

Three Monologues serves to answer some obvious questions about what Starscream will do as a leader. And what we find is that even if Starscream may have good intentions, breaking the pattern of Starscream isn't easy. A swath of personality is on display, from being unable to trust others with no ulterior motive, to the active seeking of public validation, to trying to convince himself that killing one of the only people who he's ever thought of as a friend was a completely reasonable and justified action - even going as far as to suggest killing Metalhawk was probably for Metalhawk's own good. Starscream still remembers his time leading the Decepticons in Megatron's absence, and that seems to be giving him major insecurity over becoming the political leader of Iacon. Starscream's public approval over sending away everyone who wouldn't renounce their faction alignments is washing away quickly, giving way to that nobody who knew Starscream the Decepticon really thinks much of the current situation, a point laid out directly by Blurr. That's what leads us through a night of Starscream making any attempt he can to win the favor of the population. And it's really not going well for him.

Getting Beast Wars characters trying to stay recognizable to their old CGI models in traditional art has never been easy. Waspinator's appearances in this title offer some evidence to that. Rattrap's design is one that always has seemed difficult to represent in 2D while staying really true to the expected appearance of the character. Griffith does a good job with subtle tweaks to the design to make it work better in this setting, but it's hard to escape the face just looking weird. If this was being portrayed as an at all heroic Rattrap that'd be a more important problem, but for the unsavory character without any demonstrated virtue to offset it so far, the awkwardness of the facial construction is kind of working here. Griffith also tried to play a bit with the debut of G1 continuity Flatline, who reads fairly toyetic. He has revealed that he did design this iteration of the character so it would be possible to develop as a retool, but that he did it all on his own initiative. No toy or retool is planned that he was directed to include. But it's a clever line of thought, and hopefully something he'll keep tossing in as the chances arise. Maybe one of them will stick...

The Dark Cybertron event almost certainly means that the rule of Starscream will be especially short-lived, which is a bit of a shame. Given the history of leadership he has in this universe, it could be interesting to see how he would handle it over a longer period, whether he learned anything from his disastrous command of the Decepticons or whether he'd just manage to break the whole of Cybertronian society this time out. I suspect the NAIL population to be more dangerous than a Decepticon army with no guidance though. They'd probably be less inclined to just ignore Starscream as things steadily declined. And that's just one thing that will probably never have a chance to be played out since I can't imagine there will be another period of Starscream in charge anywhere in the near future once the major event stories are done with. So, oops - looks like Metalhawk was murdered for nothing after all!