As the exodus from Cybertron begins, Megatron finds out if he really has it in him to be a monster. What do you think? The third issue of Monstrosity's print edition covers three chapters of the digital comic written by Chris Metzen and Flint Dille with art by Livio Ramondelli and lettering by Tom B. Long. 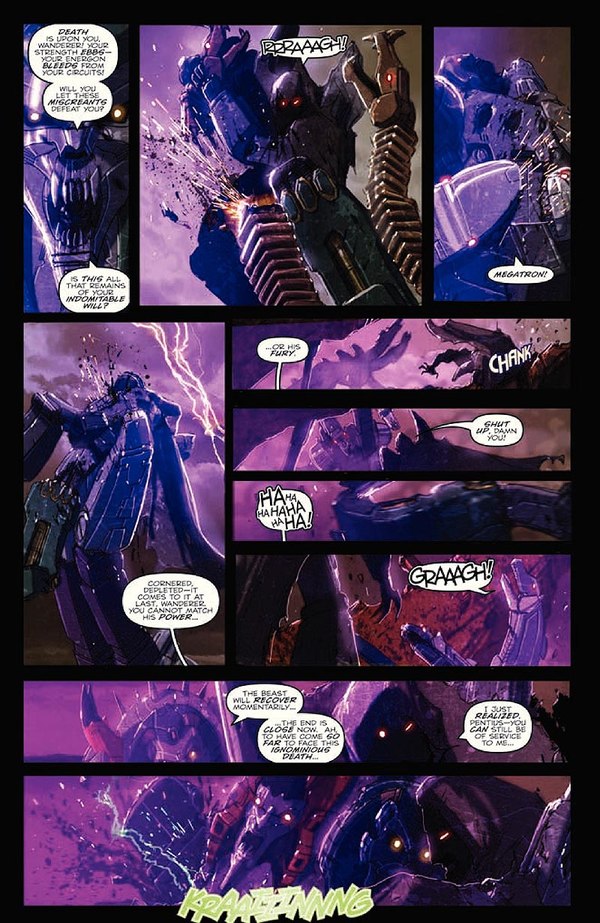 So much for our buddy comedy potential.

Megatron makes his way to the point on Junkion that Pentius has directed him to and finds the ship he needs. Unfortunately it's the ship the Terrorcons used to come to Junkion in order to find Megatron and kill him. Out of energy and outmatched, Megatron realizes that Pentius still has one thing left to offer: the fuel in his Spark. (...Quintessons have Sparks?) Pentius declares Megatron to have graduated from his lessons: he is the greatest monster here now. Thus refueled, Megatron makes short work of the last of the Terrorcons, leaving them alive to help him stage his comeback. Back on Cybertron, Optimus Prime discusses his options for the Energon reserve in the Toraxxis crater, how to refine the "dark" aspects out of it- and how to avoid waking the sleeping "dragon" they found guarding it. Kup seeks out the Dynobots to deliver Optimus' offer of assistance, an offer met by a skeptical Grimlock who has not has good luck trusting Primes. A riot nearly occurs at Starsreach Spaceport as the Exodus begins, but Optimus Prime defuses it and allows the non-affiliated Cybertronians to leave with the Circle of Light. Dai Atlas exits our story. FINALLY.

This is more or less the first half of the book. It flows a little less like chapters now and it's harder for me to tell at a glance where each part began and end. A fair amount happens in these chapters and fills us in on some things- things like why the Dynobots have beastly alt-modes on ancient Cybertron. We also get new perspectives on fairly well-known events in IDW's continuity like the Circle of Light's exodus from Cybertron. With one issue remaining, I can't tell you how elated I am to see Dai Atlas gone from this book. His belief in peace is admirable, but when one of the parties he wants a peace between is headed by Megatron, who is Megatron, or Scorponok, who has a fanatical belief that only the strongest should be permitted to survive, it's a little bit less believable that he blames Optimus Prime for the situation. He's recently shown up in More That Meets The Eye, and I'm hoping he doesn't prove to be the self-righteous finger-pointer Metzen and Dille portray him as. We're sure Shockwave shot his legs off out of friendship in Robots in Disguise, right?

One thing I'll give the writing in this issue is that Dille seems to have gotten the urge to reference Transformers: The Movie out of his system. While the events here remind me of other continuities- a couple of IDW continuity points do put me in mind of the Aligned continuity anyway, which is likely intentional -Dille is no longer referencing himself, which makes the writing seem stronger. Other than that, there's not much I can say here about their writing that I haven't said before. Or Livio Ramondelli's art: it's still a painted Dreamwave-esque style that is very inconsistent once you look past the highly-polished finish. If you have the full book or the appropriate chapter, look at the perspective on Shockwave's arm in the panel where he orders the Decepticons to concentrate fire. Not the worst perspective I've seen in a published comic book, but still pretty darn skewed.

Monstrosity is drawing to a close, and next issue has several large confrontations to attend to. Next month, we'll find out who is the biggest monster of all, and find out who slays- or tames -the dragon.