Height: 13cm to top of head

There was a time when those who wore the Decepticon badge did so with pride, and not fear. There was a time when the name of Megatron was honored by many across Cybertron. He was a scholar, a warrior and a hero, fighting for the freedom of the oppressed. But power inevitably corrupts, and none are so powerful as the mighty Megatron. Long ago, he forgot he was a hero, and became nothing more than a tyrant.

Megatron was to be a black tactical bomber once before, you know. In G2 a recolor of Dreadwing and Smokescreen was intended to be Megatron and Starscream before it was canceled. I guess better almost twenty years later than never? The really funny part about getting the stealth bomber figure now? Megatron dumped this body in the ongoing right around the same time the Spotlight issue was published. The Spotlight would have happened the way it did regardless to be a convenient pack-in, but I'm a little surprised Hasbro didn't ask for the design this toy emulates to stay featured in a main title for a while. I guess it doesn't matter much, by the time this toy reached retail Megatron wasn't even a player in the books anymore. 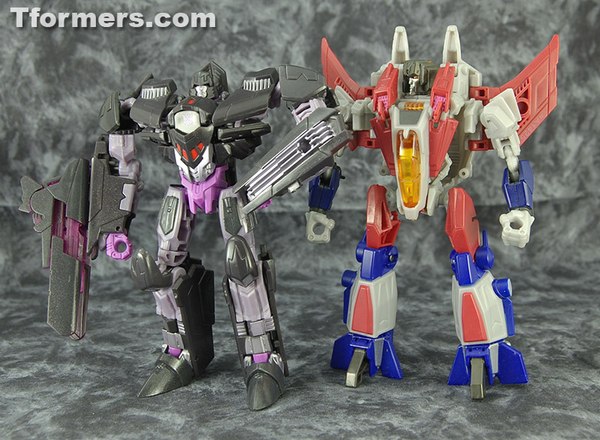 This is one deceptive robot. It doesn't seem too small at first glance. But if you just study it for a moment you finally notice how skinny it is. And then all the smallness starts to set in. Honestly, I was expecting this. I knew that a toy that has to become a plane with a considerable wingspan and has part of the wings split off to be a weapon was going to have mass issues as a robot. But shoot, this is kind of sad. The most substantial things on this toy are the arms, which are fully wider than the waist. I want to think that on a larger scale figure this would not be of much consequence. It's just on a robot already so small, going from very wide shoulders down to the tiny waist just looks goofy and sad when there are the giant forearms hanging to either side. 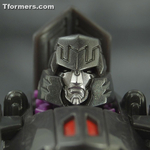 The head is a Megatron head; The helmet is the normal shape, though generically up-detailed some. The face sculpt itself seems to be at least partly an expression of Nick Roche. And much like I thought when reading the original printing of this pack-in comic, the face doesn't really look like Megatron so much as it's a face applied to a Megatron and therefore it is Megatron's face. If it could be removed from the surrounding helmet and applied to another head, you would probably never realize its origin.

Megatron has an interesting design element or two. The outside panels on the lower legs are hinged so they can close in a bit on the back and hide the empty space inside. It's a good idea but not so much in practice. Those panels tend to want to take up the same space the heels occupy in most any normal stance. So you're either not really utilizing those panels properly, or you're doing some mighty interesting balance tricks to get the legs in a posture where the heels and calf panels can peacefully coexist. Something that's less a good idea and more an odd design choice is hinged panels on the back of the shoulders. It's weird because when left closed against the shoulders, these panels interfere terribly with arm movement. The arms are more free moving if you open the panels, but then you have big flat panels sticking out behind the arms. The whole exercise just doesn't seem to make a lot of sense to me.

Then we hit the bad part. Most of the joints are what I have only been able to settle on describing as "gummy". See, there's this sticky quality in the ball joints and some of the hinges. The joints resist moving, sometimes enough to see the plastic flex instead. It's not a matter where it feels like there's a risk of breaking, thankfully, just bizarre resistance to movement before it finally gives way. This affects the shoulders, hips, and knees. ...sort of. The knees are hinged. Along the same hinge axis the knee covers are also hinged. The covers have a very gummy feeling while the specific knee hinge is pretty far on the loose side. Ultimately, my experience is that getting the exact pose you have in mind is likely to just not happen. The major joints can't be moved precisely enough. However, the elbows and upper arm swivels are basically fine, so if your pose only requires bending the arm or turning the arm left or right, I think you'll be in business.

Megatron's deco is okay. There's a lot of black and grey, and spots of silver making up most of it. Then you get purple. And just to inject a little actual color in the toy that's kind of okay, especially when most of it is placed so it looks like the purple might be internal structure where the black and grey are armor applied over it. But then you get the bright purple fists, and you just can't look away. However else you might take the presence of the purple plastic, those fists just look so completely out of place colored like that. He looks like he's wearing latex gloves. Megatron should not wear latex gloves.

The same gummy joints that hurt the robot mode also take the fun out of transforming Megatron to vehicle mode. Moving parts in the increments needed is difficult when most want to either move to a farther degree or snap back to their original places. There's a number of tabs to make things snap in place, but the hold tends to be poor, leaving you with parts dislodging as others are tabbed in. It's a shame since the engineering of it seems basically sound but is let down so badly by the behavior of the material. 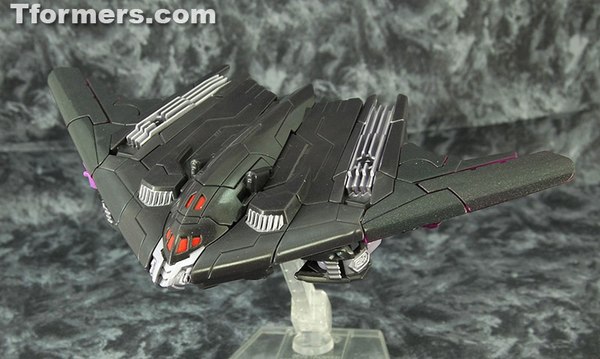 And the thing is, the vehicle mode is not designed badly at all. The way everything folds around you get a flying wing bomber with a very slim profile and no underbody junk to speak of. There are evident robot aspects if you look at the underside of the jet of course, but it's all held so close in that it just flows right in with the natural lines of the vehicle form. From above it's very very nicely realized. A lot of the actual panel separations are well hidden by lining them up with the surface sculpting. There's not any lines that don't look like they belong. It's a clever kind of attention to detail, and I appreciate it a lot. While parts of the design and details are certainly sci-fied up a bit, the general outline of the stealth bomber is realized very nicely. It's probably the best trait of this toy overall. But there again, that's mostly just for not having to deal with any gummy robot joints while everything is folded in to wing surface. 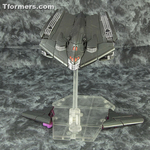 Since the weapons become integral elements of the vehicle, there's not much for the plane to do. A landing gear unfolds under the cockpit, but the rearward wheels are just bumps sculpted in one face of the forearms, and the way everything lays out in vehicle mode there's not a way to get it all resting on the landing gear. Whether the nose wheel is deployed or not it all sits about the same way. Neat I guess if this was known and the front wheel was kept just for the aesthetics.

It's hard to call this an accessory. The fusion cannon is made from pieces of the vehicle mode required for its completion, so that seems to exceed the realm of accessory parts.

The tips of the wings can extend and then peg on to each other to make ...a shape they call a cannon. It's an odd shaped block with two flat panels projecting off the front. Maybe it can pass for some kind of linear gun if those would be the accelerator rails. I'm pretty sure the original comic design had something similar, and it was no more believable as a cannon then either.

A hinged peg lets this mount to either forearm, or it can be handheld if you prefer. I sort of would rather none of the above, but we don't always get what we wish for. 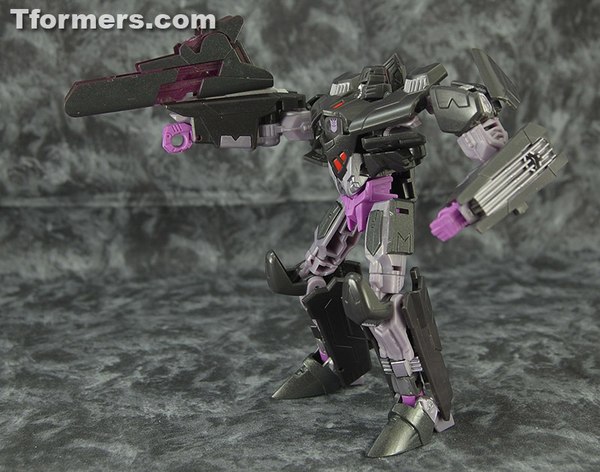 I haven't cracked in to Trailbreaker yet, but I still feel safe in assuming that Megatron is the poorest toy in the assortment. Bumblebee may have been an eyesore (almost literally) but it had okay design ideas. Megatron for the most part looks nice but has conflicts between its design and its materials that takes away the fun of the mode with moving parts. In a way, this is like the opposite of Orion Pax, with Megatron's vehicle mode being the strongest showing for the toy, both in structural terms as well as execution.

I'm not even taking the toy's size in to consideration going through these final thoughts because that has really no bearing on the things that have gone wrong. Handling Megatron's robot mode and transforming the toy to its vehicle mode has been consistently an unpleasant experience for me, and even with the vehicle form turning out surprisingly nice, a lot didn't. Megatron's an easy rate at Could Have Been Better on the Figurereviews.com Non-Numeric Scale, and I just wish the robot could match the jet for how well things turned out.

I hope Dreadwing a couple waves from now feels a little smoother in the joints at least. Bad enough he won't have his 'illin' gatling gun, he can at least move freely since my G2 love obligates me to a purchase. 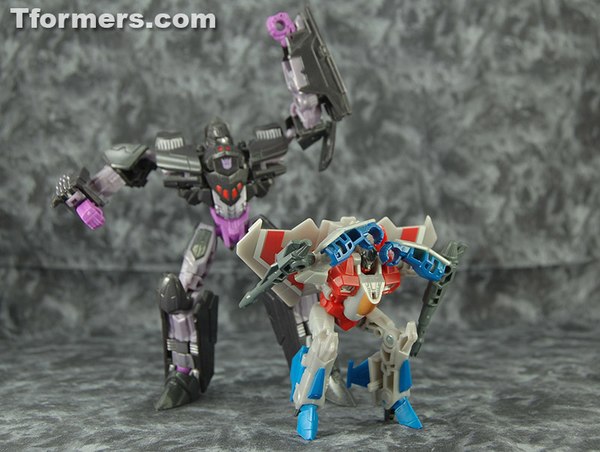