Few Autobots are as well liked as Trailcutter. He's always ready with a joke or a reassuring word -- and when neither of those will do, his impenetrable force field usually serves to improve the situation. He sometimes worries that he uses too much fuel, but the other Autobots are more than happy to take a smaller Energon ration if it means Trailcutter can keep deflecting incoming laser blasts.

For such a well-liked guy, it sure took Hasbro forever to get around to him. Last of the 1984 entries in the Autobot Cars class to get a modern figure, Trailcutter is also the only Deluxe in the first wave of Generations comic packs that isn't one of The Usual Suspects. And he's got the best comic of the bunch. Topping all that off, he's also the best figure in the wave. 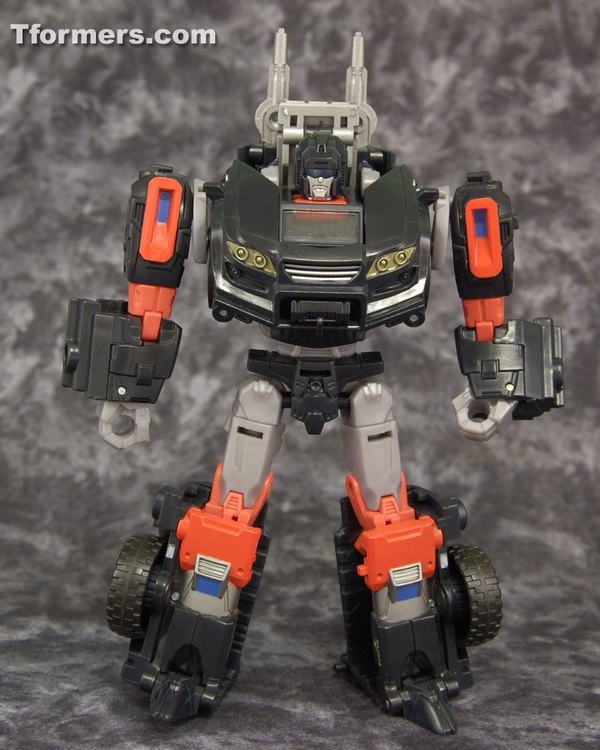 Trailcutter is pretty readily recognizeable as the character, though naturally with modern styling as is the Classics/etc. way. A lot of his styling is based on Alex Milne's design for IDW's More Than Meets The Eye monthly series, just as the rest of the wave is IDW-derived. (This is the reason his face is silver rather than black.) In fact, the cover art for his pack-in comic is straight-up the Milne design as opposed to being a 100% accurate picture of the figure. The figure's proportions are slightly different than it's drawn within the comic, with smaller, lower-slung shoulders in particular and an overall bulkiness that fits the character. The recognizeable car parts form a slightly more barrel-chested torso that seems very appropriate to Trailbreaker- though I'd describe the G1 figure as more pot-bellied than barrel-chested when you get down to it. The torso's also angled similarly to Universe Hound's, interestingly. The face, with its slight grimace and square jaw, isn't quite Matt Frank's art from the comic but it's similar while being less exaggerated- I'd love a purely Frank-inspired face, but I'm sure we can save that for the hopefully inevitable "Forcefield Face" third-party upgrade. 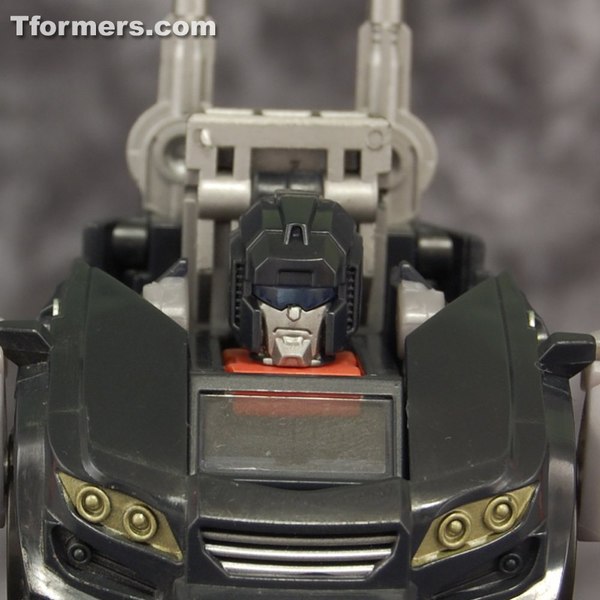 Trailcutter is limited in points of articulation but every point he has is essentially unrestricted. Shoulders and hips both have excellent range on both axes; the head, bicep, waist, and thigh all swivel without obstruction, and the elbows and knees flex to ninety degrees. He's nicely poseable in a solid but not groundbreaking way. The transformation requirements have two separate layers of car parts on the torso, and neither locks down quite as securely as I'd like, sometimes popping loose at one or both spots when you move the shoulders. His fists also don't lock into place, which I'd prefer though again is not a source of major frustration. Fortunately the thing I was more concerned with- the point at which the shoulders tab into the sides of the torso- hasn't come loose at all. The oddly-angled transformation joints inside the knees lock down more strongly than I initially realized- I've had other toys with similar joints where the leg tries to bend sideways and make the figure look knock-kneed, but Trailcutter doesn't do this once you've transformed him correctly.

Trailcutter's got a lot of 5mm sockets. If you want the two guns on his shield/roof thing on his back like the original toy you can peg it into his forcefield projector, or you can have him hold it or mount it on his arm. Or his shoulder. Or his leg. Like I said, lots of sockets. Maybe a few Mini-Cons would help his fuel-efficiency problem...

It's just about the perfect level of complexity, maybe a step or so above the original Classics/RTS Bumblebee and Universe Hound. I find that a lot of my favorite Deluxes share that transformation mechanism where the wheels are hidden inside the torso with the arms mounted on the other side of the same piece. Here, the arms have to swivel to align the panels of the forearm with the rest of the truck body as formed by the torso and legs. The lower legs pop loose and accordion-fold upwards to connect up to the body. One thing to watch out for: there's nothing bracing the center hood-panel, so keep your thumb off of it when transforming or the hood will push in and you'll have to unfold him partially to get at it and put it back in place. Or push on his shoulders to get it popped back out, but I've had only limited success there. 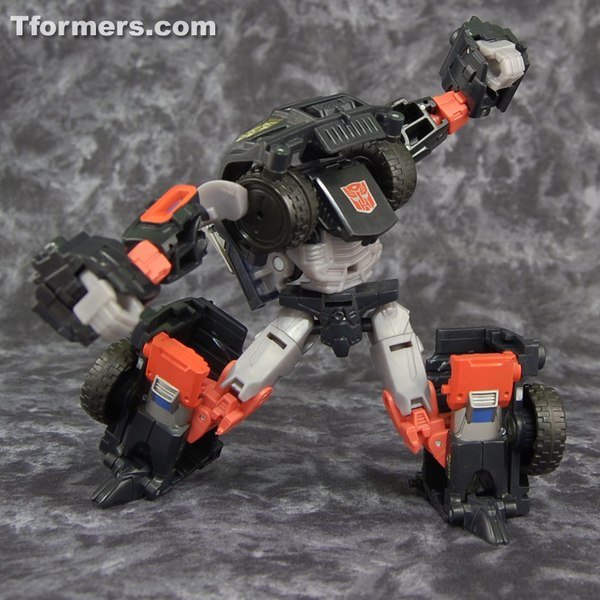 The original Trailbreaker was a normal-looking pickup truck with a camper cap. Trailcutter is more an armored SUV that, when you take the shield part off, looks more like a pickup truck. Mainly that's to accomodate the creation of Hoist from this mold, but there's nothing stopping you if you want to declare the back of the vehicle a cap and let him be a truck again. Unlike the original toy he wears his forcefield projector and guns on the outside, so the armored side windows definitely give an air of being a military or SWAT vehicle rather than a civilian truck. If you feel like arming him even more, you've got 2 5mm pegs on each side and three on the roof. 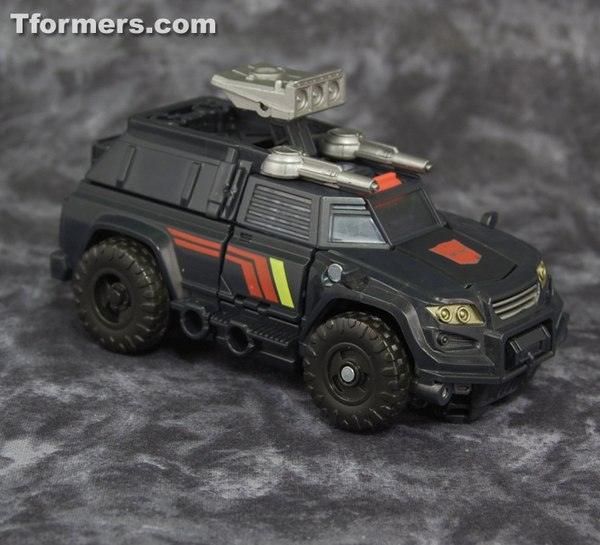 The toy rolls well and the wheels stay in alignment just fine. Trailcutter does at least have paint on his front end for the headlights, grille, and weaponry. He also keeps a variation on his original side-stripes, one that I'm reasonably certain I've seen on real-world trucks of that era. This comes at the expense of no paint on his taillights (or the metal frames they're clearly supposed to have) as well as the large box, whatever it is, on his tailgate. I understand that they can only afford so much paint, and it doesn't diminish my enjoyment of the figure much if at all- but I do wonder how forgiving collectors are going to be of such things now that Generations is explicitly the collectors' line. Then again, as long as they stay $13 instead of Marvel Legends' $15 and up, I'm fine with it. One last amusing note: the huge Autobot emblem on his hood is only visible in Vehicle Mode. I used to be one of those "what about the disguise part!?" people but, I kind of like that now.

His main accessory is of course his shield/gun/thing. Between the handgrip when it's unfolded, the pegs when it's closed, and the proliferation of 5mm hardpoints, he has a lot of options. I think I like it best on his back simply because it makes a more Trailbreakerish silhouette for him, and I just like shoulder cannons. This leaves him empty-handed, which also kind of works for Trailcutter especially in light of his comic. Does make me wish he had openable hands kind of more like Darkmount/Straxus, though. 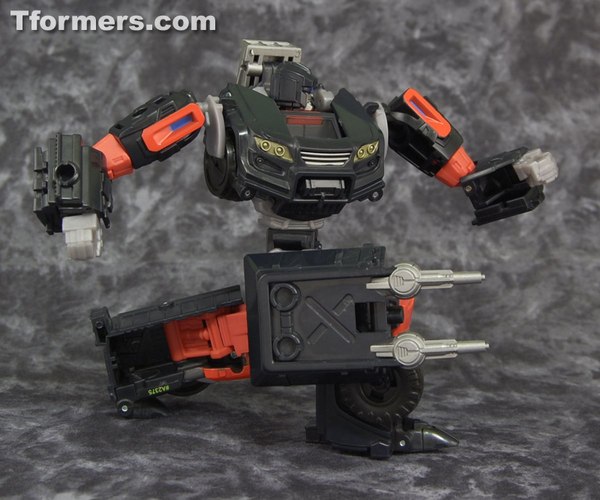 His other "accessory" is of course a slightly modified reprint of Spotlight: Trailcutter, which ExVee reviewed for TFormers here! It's easily the best of the Spotlights so far, and the modifications are quite minimal, the kind of light censoring they used to do with the Marvel Universe comic packs. Nothing that makes the book something it wasn't and nothing that makes it significantly less the delight that it is. If you already have a copy, you should pass this one around and let people see exactly how good James Roberts' writing is. If you haven't read it yet, you'll love it.

Trailcutter is the most solid figure in the wave, and as the most desirable to the adult collectors that are now Generations' focus, that's a good thing. He's not perfect, with a few stability issues, but nothing you can't work around and not nearly as bad as Blitzwing, just for one recent example. His accessory works well in just about all of its various capacities and his articulation is limited in raw points but not in range. He's Very Good on the Figurereviews.com Non-Numeric Rating Scale, and I'm glad that he and Hoist get a mold this good. As the overall best package of the wave and a New-to-Generations figure, you'd be wise to get it when you see it. 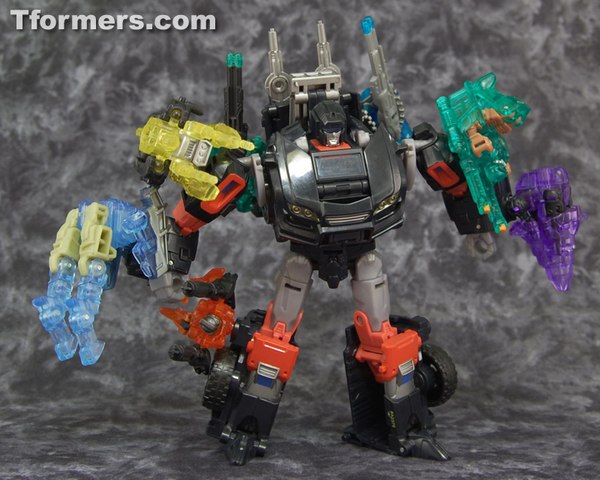