It's Dino vs. Dinobot as Grimlock and company put down another set of Shockwave's experiments! Transformers Prime: Beast Hunters #4 is written by Mike Johnson from a story by Johnson and Mairghread Scott, with art by Agustin Padilla, inks by Jose Aviles, colors by Patricia Tramontano, Josh Burcham and Thomas Deer, with lettering by Tom B. Long. 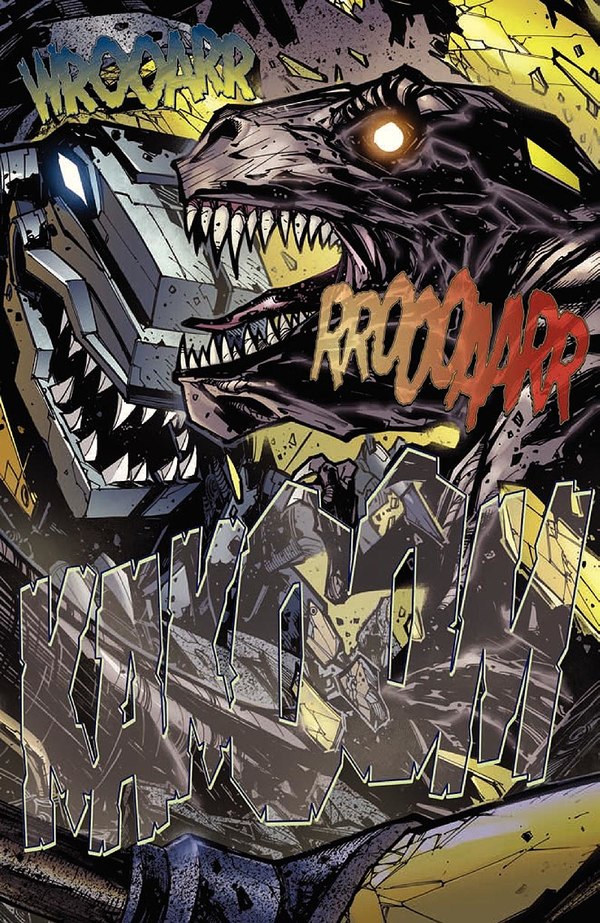 Why is this not on the cover!?

Zoom once again fails to ingratiate himself with Slug and Snarl as they fret about how late Grimlock and Swoop are in getting back. Grimlock continues to tussle with his T-Rex counterpart in Shockwave's abandoned lab, and Swoop makes a startling discovery: these creatures bleed Energon. As Swoop tries to contain his meatier doppelganger as it flies out to the surface of Cybertron, the other Dinos escape and go wandering off to parts unknown. Outside Lost Spark, Zoom glumly ponders how he never gets to have any adventures...

Most of this issue is occupied with the Bots vs. Dinos brawl, which is a lot of fun. But the final resolution feels kind of abrupt, and the nature of the conclusion feels kind of off. It's not a victory or a defeat, per se; it just stops. This also helps drive home that the Dinobots are fighting Shockwave by proxy: Shockwave is busy being in the Beast Hunters animation right now, so there's only so much you can do with him, and most of it entirely indirect. Like having a set of his homebrew dinosaurs attack the Dinobots. On the other hand, the nature of the Energon Dinos does give a decent rationale for why the T-Rex is a more traditional pop-culture form (that is, not up to date with the latest scientific information about dinosaurs). The character of Zoom is still kind of just hanging around trying to get involved with the story, but with as much time as we've spent with/on him so far, you can be fairly certain this will change.

As I suggested would be a good idea last month, Agustin Padilla is now joined by inker Jose Aviles. He has a slightly different shading style from Padilla, and I'd hazard the guess that his primary responsibility was inking the Dino Fight pages. He makes things look a little bit rougher, and it actually helps- I've compared Padilla to Manny Galan before, and the grittier presentation makes him veer a bit closer to Derek Yaniger. I was also pleased to see some more long and wide-angle shots in the fights, particularly in the dogfight between Swoop and the pterodactyl where a sense of space is important. And whether it's Aviles or Padilla, much of the perspective and lines on the robot characters seem cleaner and more Euclidean this month. There's still some oddball shots, but all in all it seems like Padilla, with Aviles' help, is working on his weak points- and that's really good to see. I wish the pair had gotten to do a cover, or at least that some cover representative of the book's content were available; Ken Christiansen does some lovely covers, but if you put Grimlock in a fight with an Energon-infused T-Rex in the book, shouldn't it be on the cover? I say yes.

This issue lives and dies by its art: the spectacle of the fight is the main thing, and it looks pretty good! But overall we kind of averaged out with stronger art and weaker writing than the previous issue. Next month starts our last Mairghread Scott-scripted story as #8 will be the final issue of Beast Hunters, so I fully expect the writing to come back up. Hopefully Aviles stays on, and we get the best possible package.