The Transformers: More Than Meets The Eye #20 - Generation One - IDW Comic Book

The players assemble, history is revealed, and the final steps are taken toward Tyrest's objective as Remain in Light approaches its climax. From here, anything can and probably will happen! Written by John Barber, art by Alex Milne with some inks by Brian Shearer, colors by Josh Burcham and John-Paul Bove. 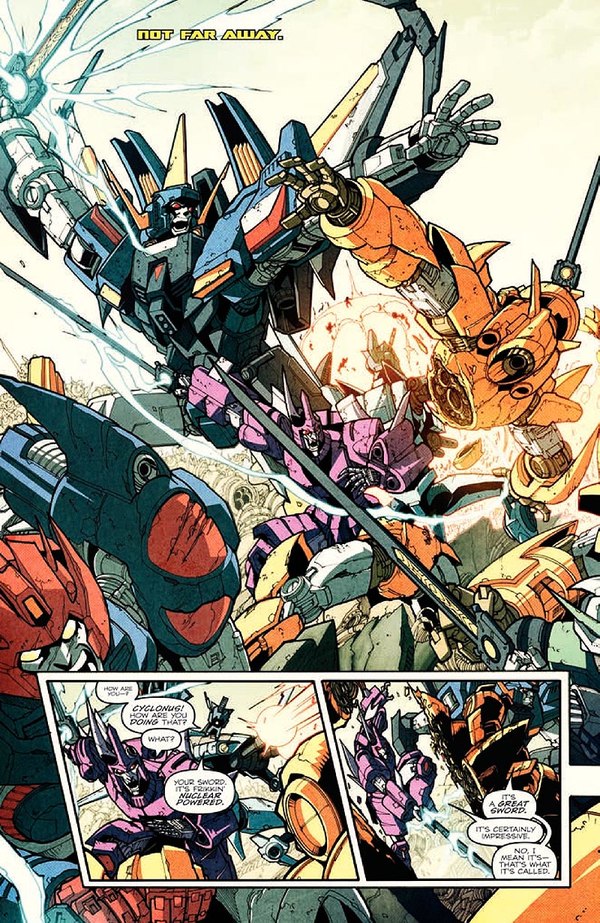 Ratchet struggles with the bisected Ambulon, victim of Pharma's chainsaw arm, Cyclonus, Whirl, and the surviving Circle of Light continue to battle their way through the legion of Legislators while Getaway explains what's up with Skids and why the two of them had run afoul of Tyrest in the first place. Meanwhile, Tyrest finds his long held ambition about to bear fruit as he stands ready to flip the switch on every cold-constructed Cybertronian in existence. And that is just the first six pages. To tell anything more would be to do you the horrible injustice of spoiling the contents of this issue because virtually no detail presented is not important. Having read it several times before beginning to write so that I might excruciatingly scrutinize it for every detail I possibly could, there are a great many things I could say about what is in this. But besides to say that it's all there, I can't.

I think last month's issue felt more narratively dense - it took me a longer amount of time to read the issue and process the events and dialogue because it was pushing hard to make sure to get all the pieces in position to start the endgame. Issue 20 is dense in a different way. It's certainly possible to read through it in just a few minutes, but without taking the time to really study not just the art and the dialogue by themselves, but how they sometimes act together you end up missing out on a lot of what's going on. This issue is delivered with subtle things to test your attentiveness, and so when some of them are capitalized on later, you can look back and see that all of it was indeed planned ahead. It's no new thing to understand that James Roberts has a remarkable skill at the long game. I'm sure more than a couple of my reviews on this series have made note of it, in fact. It's easy to see that this is a living world in his mind that he expresses portions of so the rest of us can get a look at it too, and the writers that have that are typically favorites of mine.

But an unsung hero in this is Alex Milne. It's difficult month after month to find commentary on the incredibly high level, consistent work of a single artist without just repeating the same words or thoughts. But it's just recently that I've realized what a challenge he must be against to give form to the ideas that fall from James Roberts' head in what must be staggering complexity of script. It took examining so closely the details this issue to finally see it. It's beyond being able to draw at a same quality month upon month. Doing so while producing the visualization of another person's ideas in full detail is a completely different manner of skill. It's one that is a stand out feature this month, so make sure to take your time and try to catch as much of it as you can.

If the shipping lists are correct, issue 21 of More Than Meets The Eye is due out next week. Finally marking the conclusion of Remain in Light, I won't complain about having these issues run back to back. It's a heck of a cliffhanger, and while part of me is anxious to see the ending, I won't deny some unease over what the final death toll may be. A Roberts story can be a cruel, cruel thing...