Ultra Magnus battles for his life against Galvatron, while Cybertron falls under attack from converging plot lines! Written by Simon Furman, pencils by Guido Guidi with inks by Stephen Baskerville and colors by John-Paul Bove. 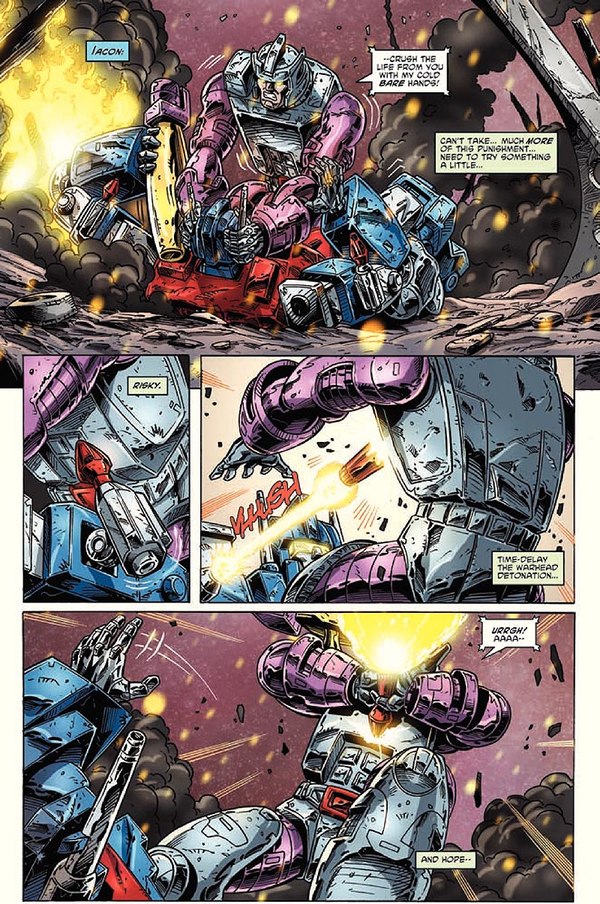 Oh, those actually are good for something...

Galvatron falls out of orbit and immediately enters a one on one fight with Ultra Magnus. Try as he might, Magnus can't shake Galvatron off in order to deal with the much bigger threat: The looming Warworld and its armada of assault drones being deployed to Cybertron's surface. Meanwhile, Primus sends Hot Rod on a journey to fulfill his destiny. I think.

Months of holding patterns end as the Bludgeon plot line that's felt like was held out in front of us basically forever now is finally put in to action. In truth, this reads better than the average Regeneration issue I think largely because there's a lot of action page to page to keep your attention engaged while the story still keeps its somewhat sad pacing. It takes most of the issue for the plan to counter the attack drones to even be raised, leaving no time to even really start it this month. A lot of what takes place on panel ends up being a lot of characters getting wrecked or killed trying to stop the ground assault. What's probably worked out best the whole issue is the fight between Magnus and Galvatron because it's staged so there are short breaks that coincide with focus changes to other events, and in one case it picks up on Galvatron in the middle of a sentence which keeps it feeling like the action and energy was maintained even while you weren't looking. It made it feel like there was some life in the fight. Listening to his thoughts while Magnus is getting beat upon is vaguely interesting in showing both that the rivalry between him and Galvatron is entirely one-sided thanks to Galvatron's wacky time travel origins, as well as how Magnus feels about being portrayed as Cybertron's strongest fighter. Though I'll say that despite his misgivings, Magnus shows by the end of the issue that it's not all for publicity.

Guido continues doing an admirable Wildman emulation in the art style. For an action heavy issue like this, the skill certainly is on full display. The Magnus/Galvatron fight keeps proving the highlight of the issue even here with some of the more interesting moves Magnus uses rendered in excellent form. There's even one close up panel involving Galvatron's hand inside Ultra Magnus that really caught my eye for how well it came out. In some places I do think the coloring style might not be working to the best benefit of the art. The Warworld reveal panel that occupies two-thirds of a page is a bit impressive, but might have been made more with a different approach in how the colors were applied.

Though we won't be picking up on what's happening on Cybertron again until October, with as few regular issues as are remaining, I really think more than ever this title needs to hurry up and move things along. When the only saving grace for a given month is having enough fight scene to disguise how thin the actual story content is, we're well past the point of pretending there's not problems. We've had worse issues of the title without a question, but there's no good reason we couldn't get much more out of this book than we are with roughly half a year left until its conclusion.