In 1989 Bob Budiansky had been writing the Transformers comic for nearly five years and was pretty well burnt out by his own admission. As his replacement he recommended possibly the only other person with as much Transformers writing experience: Simon Furman of the UK comic series. Transformers Classics, Vol.5 is edited by Dan Daley with assistance and notes by Mark W. Bellomo. It covers issues 51-64 of the US Marvel comic written by Budiansky and Furman, with art by Jose Delbo, Geoff Senior, Jim Fern, and various inkers and colorists. 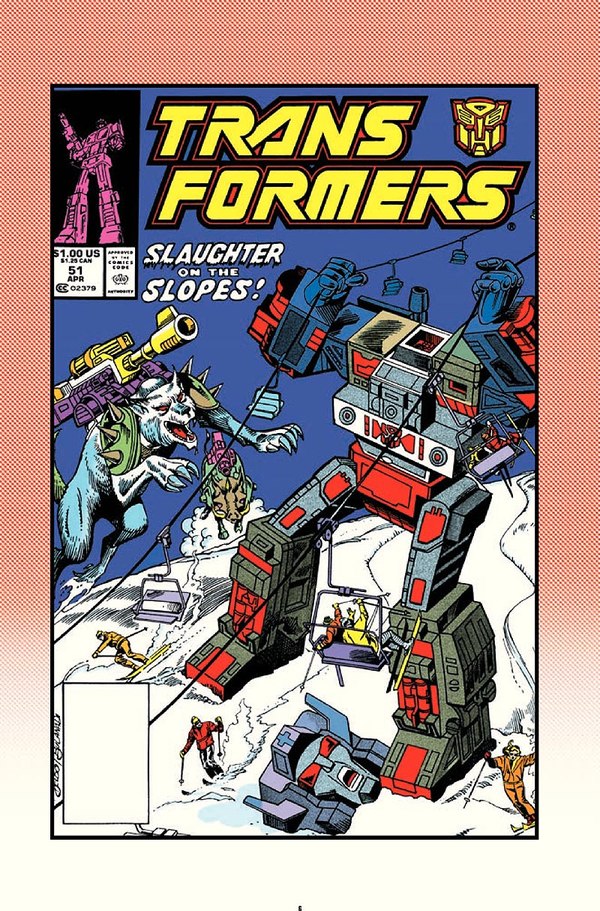 I ought to count the Marvel covers that have Fort Max suffering in some way. Off the top of my head: 3.

The book covers 15 issues, from just after the Underbase Saga to halfway through Matrix Quest. Among the occurrences in Budiansky part of the book: Spike Witwicky finds his destiny is inescapably intertwined with that of Fortress Maximus; the Pretenders run afoul of the Mecannibals and escape to a planet of Space Amazons; the Micromasters are introduced and one of them wins a wrestling championship. Then Simon Furman arrives and brings Megatron back... who on his return immediately decides that his best first move is to bring Starscream back from the dead as a Pretender. In a 4-issue arc, he forces Ratchet to do the reviving but inadvertently gives him the opportunity to revive Grimlock, Bumblebee, and Jazz. Then we bring a lot of Furman's UK concepts into the book like Emirate Xaaron and, of course, Primus. For the first time in the US Furman's Transformers creation myth is published, and the Matrix Quest begins!

All told the book covers from "The Man In The Machine!" to "Deadly Obsession!". Quality of writing and art varies from issue to issue, but the reproduction is exceptionally clear and sharp. While some evidence remains of the comics printing technology of the `80s, much of the distinctive pattern of newsprint shading and coloring has been replaced by solid block color, and it looks quite good. On the whole it appears that the black halftones used to simulate gray or shadows have remained while the colors are now solids. Of all the artists in this collection Geoff Senior reproduces the best and most cleanly because of his use of solid black for shading, but overall the distinction is minor in terms of reproduction quality. This has to be the best these comics have ever looked.

Unfortunately the work has to stand almost entirely on its own merits, with the supplemental material being significantly lighter than that of IDW's "Classics UK" sister series. Notes are given by the book's editor after each issue but are pretty similar to what you'd find in the "Notes" section of the Transformers Wiki (and in fact calls out and quotes the wiki in one such set of notes). Most disappointingly, I would have liked to hear from Furman, Delbo or both exactly what the heck was up with the supremely creepy cover for "All The Familiar Faces!". At the same time, while the extras may be lighter, the presentation is, as I said, excellent. The previous volumes restored the issues containing Spider-Man and Circuit Breaker which had been missing from IDW's earlier collection series, meaning this series is your best bet for a totally complete set of high-quality Transformers comics reprints. No signifcant changes are made to the content of this volume. All that's different is the removal of the Marvel logo from the cover art of each issue, and the barcode/Spider-Man heads from the lower-left corner. The "Stan Lee Presents:" is still present in any issue where it was used.

While I would've liked to see the US comic looked at with an archivist's eye as James Roberts does for the UK collections, what we get is still great. As with the UK series, this is your best option for collecting the original Transformers comic series, and it's well worth passing over and/or selling the Titan collections in favor of these.