Shout! Factory has a well-established pattern of collecting the Transformers Prime story arcs in stand-alone releases alongside their season boxsets. With Season 3 on the way, Dawn of the Beast might seem a bit superfluous, but does have a great creator commentary going for it.

Just about the simplest menu possible- if attractive -with two screens: the main menu, where your choices are "Play All" and "Episodes," and the "Episodes" Menu which gives you the option of playing each episode with or without commentary track. 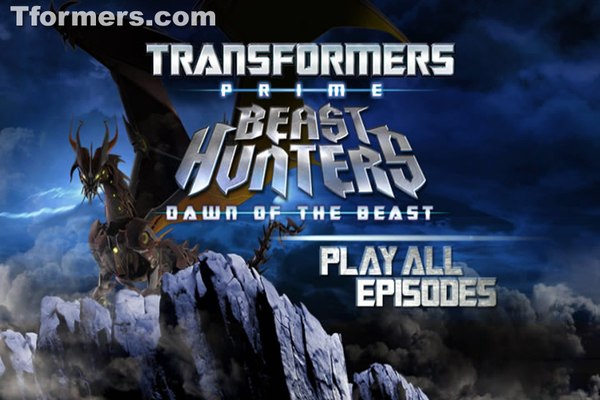 The disc contains "Darkmount, NV," "Scattered," "Prey," and "Rebellion." As a season opener it's practically a movie unto itself, but it's kept in its original format of four separate episodes here and not edited together as the One Shall Stand DVD was. Probably for the best since it allows for more flexibility in your viewing, and means nothing was removed. The opening arc was a little bit slow to me, as I felt the second season to be- after this the series just flew by with a stretch of top-quality episodes. Being the slowest-paced story arc in a show's best season is nothing to be sneezed at, however. The standout addition to the series from this story turned out to be Ultra Magnus, who managed a complete and satisfying character development arc in 1/5 the time that most of the rest of the cast got. Michael Ironside did a fantastic job as the character, and Magnus definitely brought some new life to the character dynamics of the show that Smokescreen, in my opinion, didn't.

This is where Dawn of the Beast distinguishes itself from just a quick story-arc collection- and most likely from the finished Season 3 boxset, since the commentators mention the disc by name in the course of the commentary. There are commentary tracks for all four episodes, featuring producer Jeff Kline and what terms "75%" of the Prime writing staff: Head writer Duane Capizzi, writer Steven Melching, and writer/writer's assistant Mairghread Scott. There's a lot of fun trivia and production information not previously known, and while I don't want to give it all away, here are a few highlights: Jeffrey Combs, voice of Ratchet, was originally cast for Starscream; Michael Ironside introduced Bulkhead actor Kevin Michael Richardson to his wife; Steve Melching had been pushing for Seaspray to more or less take the Ultra Magnus role as far back as Season 1; and most amusingly Peter Cullen was not informed about Optimus Prime's resurrection in "Rebellion" before script readings began, and was beginning to have some depressing Transformers: The Movie flashbacks. Much information is also given about the limitations of CGI production and how they worked around them ("I've become an expert in canyon fighting," Scott says at one point) and overall the commentary is clearly aimed as much at adult fans of the series as anyone else. It's highly entertaining and definitely worth a listen.

Previously I reviewed the Blu-Ray version of the Season One boxset for TFormers, and was wowed by the overall quality of the image. Naturally the Standard Definition picture on a DVD isn't going to be as good, but I was quite pleased at the image quality here. It's the best possible reproduction possible at this resolution in my opinion.

While previous sets gave you a choice between 5.1 Surround and Stereo mixes, only the 5.1 audio is given here. I have no problem with that; I played it back on stereo speakers and the sound was clear and rich.

Pretty much in keeping with the Prime packaging style, with a cardboard sleeve that matches the interior box. The inside of the box has an image of Cybertron behind the clear plastic. No inserts or other information this time. 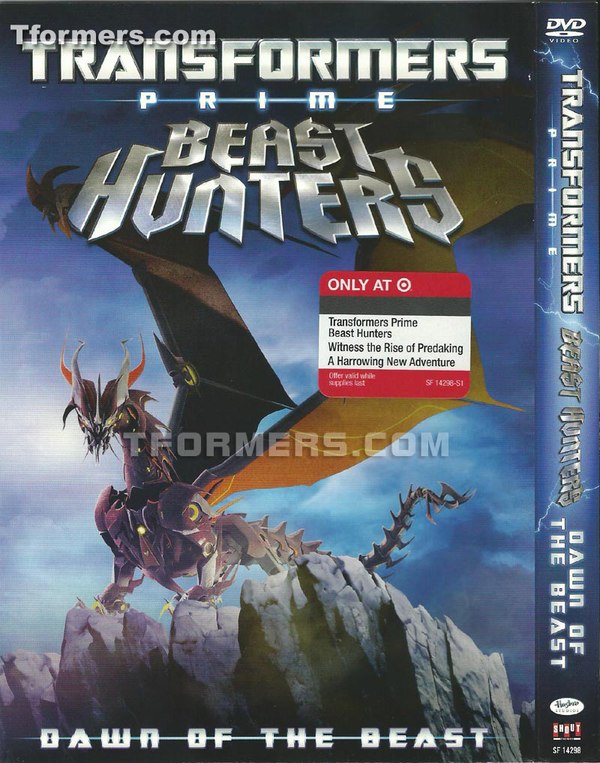 The unknown in this situation is the price of this Target exclusive, which was not known as of this writing. Amazon gives the List Price on the full Season Three boxset as $20 on DVD and $25 on Blu-Ray, so I would hope that Target would charge significantly less for this DVD since it only contains a third of a (short) season. At the same time, the commentary does seem to be specific to this disc and will probably not be on the Season 3 box. I found it entertaining and enlightening enough that if this DVD doesn't run more than $10 I'd be satisfied with the price. If you're not interested in commentary, or if you're a completist who already has season 3 on preorder, you can skip this release safely. But if you don't have the Hub and want to get a look at season 3 before you commit to the full set, or if you like a good commentary track, this is worth it- assuming the price is right.