Release Data: Released in the United States in August of 2013 at a retail price of US$12.99

Thundercracker believes that the ability to fly is the ultimate expression of evolution among his kind. He views all those without it as inferior beings, doomed to crawl and struggle in the dust. He proves this to himself over and over by taking every opportunity to attack those below him. But his sneering superiority hides deep insecurity. He's unsure of himself as a warrior, doubts his commitment to the Decepticon cause, and suffers and almost crippling fear of someday being trapped on the ground.

Back in December when I reviewed Starscream, I was very much in support of the idea of a new set of seekers drawn off of that mold. Less than a year later, I've been rewarded with my next installment on that plan, and Skywarp is already on the books to hit sometime earlyish next year. The promise of the core three seekers in a total stretch of a little more than a year must be a relief to many given it took nearly five years to do the same thing using the Classics mold at US retail. And what I find bouncing around in my head now is... when do we get to replace the coneheads? 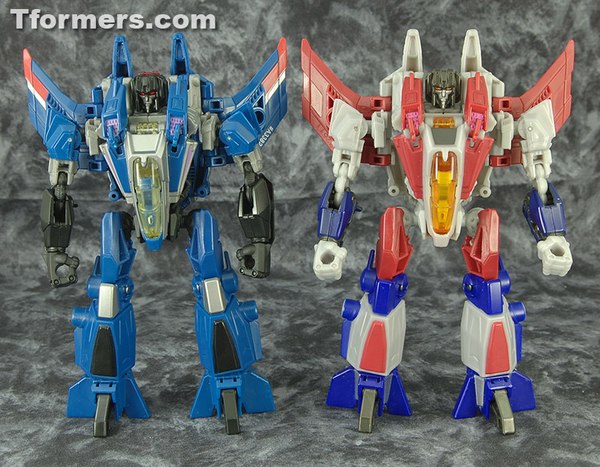 Setting the toys side by side really shows that Starscream had more hoops to jump through than Thundercracker to make the appearance work. Thundercracker's comparatively more simple look gives some added freedom in leveraging the plastic colors, so there is a pretty unique visual identity gained by having different patterns of color in different places. It was surprising to me to realize just how many different colors could possibly be used on this toy by comparing between Thundercracker and Starscream's plastic colors. Since the plastics are able to do their job largely on their own, Thundercracker gets to use its allocation of paint to fill out more details rather than doing color corrections. Thundercracker gets some good detail added with more of the purple glow highlights, a different paint layout around the cockpit that takes advantage of the plastic layouts to look more involved and "finished" than Starscream, and adding Thundercracker's distinctive wing stripes and wrapping them around partway on to the underside so they're visible from the front in robot mode. 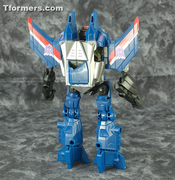 Thundercracker doesn't go completely without some massive painted areas - most of the backpack is done over in silver, though the upright bits behind the shoulders filling in visually for the classic intakes are left in their base plastic color. Not strictly correct to Thundercracker's normal appearance, but it looks really nice contrasted against the grey and silver surrounding it. The only place I think I'd have asked for more paint might be the feet. I'd have liked seeing the space between the toe and tailfins picked out in silver like was done with Starscream and broke up the blue a bit on the legs. That is I think the weakest point of the figure's deco, the vast expanse of blue that isn't effectively interrupted along the way. Still, on the whole the robot got a really solid redo and despite not having any different parts is satisfyingly distinct looking from the previous mold use. 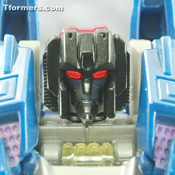 Something I made a specific point to note when reviewing Starscream was the amazing glow the eyes had, and Thundercracker is right there alongside. Thundercracker's eyes are a slightly pinkish red that does every bit as well as Starscream's amber to take even indirect room lighting and bring the eyes to life. I can't say if it's material, or a matter of choosing just right colors that transmit light effectively, or even if it might be something specific to the shape. I only know that it works super well and I'm really happy to see this characteristic carry on to more than just the first use of the mold. As a side note to this, Thundercracker's other clear plastic part, a piece comprising the canopy and a hinge block inside the body is a different color than the eyes, in this case a pale yellow. I note this only because in my experience it's very unusual to find two different clear plastic colors on a toy. That's actually one reason light piping eyes in Transformers end up painted over, the single clear color available to use doesn't fit that purpose and it's easier to paint the eyes than whatever else conflicts. But with two colors available to this one, I sort of wish they'd stuck to the amber color for the canopy, I think it would have looked good along with the blue body.

I was really surprised by the feel of the toy. There's always some change with plastic colors, even if only very small. It's unusual though to really have that make a really obvious change in the way the toy behaves. Thundercracker feels more "right" than Starscream in most respects. A really good example is the elbow joints that are designed to soft ratchet, a function I had no idea existed in Starscream because they never caught, it was just smooth elbow movement. The figure doesn't need the elbow support that provides, but it's an easy thing to point to for how this figure works in these plastics. Overall the movement of transformation and posing joints feels smoother and has a "just right" stiffness that lets everything work together very well. Even the wings and shoulder joint plates that share a hinge no longer both move when you want to change the position of one or the other. I'm very pleased and impressed with the physical condition of this toy.

I always loved transforming this mold, and the better fit of the parts makes it even more enjoyable on Thundercracker. The only thing to note, the backpack hinges are a little extra stiff, so you have to push down in to the hinge while you fold the cockpit in order to make it move how it needs to. Otherwise a completely smooth process, and just as fun in the opposite direction. Especially bringing the legs out from under the vehicle is great when they smoothly slide off the pegs and swing forward. 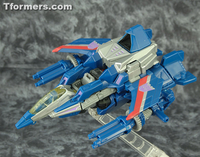 Not as much to talk about as the robot mode. The overall color balance is better with the big silver chunk on the back, and in general you can see in this mode how some of the deco was planned out. The silver paint along the sides of the chest line up with the torso/backpack hinge plates to make an extended silver/grey strip along the sides of the jet that's really striking. The close match between the grey plastic and silver paint is kind of amazing too. In most situations you can't immediately see the point where it changes from one to the other because somehow the plastic and paint have similar qualities of gloss. I'd also like to think someone was listening when I called out the Decepticon symbols on Starscream's wings as needing bordering to stand out, because here's Thundercracker with edged Decepticon symbols. The darker purple Thundercracker uses for highlights would probably have had contrast enough to work even without it, but since the insignia has to cross a couple different colors better to have it made to stand out that much more.

Thundercracker has the same pair of cannons based on weapons from the War For/Fall of Cybertron games. The guns are where I actually noticed the better parts fit first, because the first thing I did when I opened the toy was try to give those guns a spin. While they still can't spin freely, they move so much more smoothly than Starscream's individually. That's less true when the guns are combined, but the linked barrels still move a little more easily. Sadly the guns lost a lot of paint compared to Starscream's, now only having paint on the little engine block on the top. The solid blue barrels actually look pretty sad. 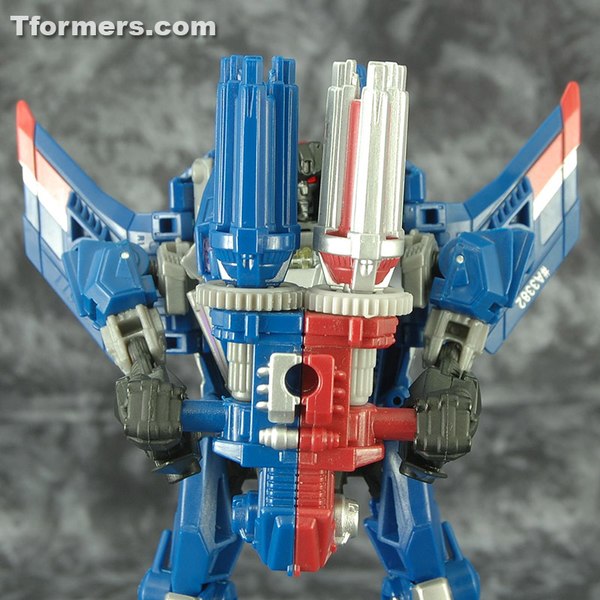 Thankfully the plastic changes appear to have relieved some of the problem I had with Starscream. Stressing is greatly reduced when mounting the weapons around the figure. Unfortunately you still run a really good chance of cracking the ports in the forearms if you try to plug the weapons on there. I thought at first I had gotten away with it, but a subsequent attempt resulted in a fracture just like Starscream had. So, uh, just don't do it.

One of my favorite things is having a toy that I already greatly enjoy, and finding out that it can get even better when its recolored. Although a couple of places could use some extra paint to break up large chunks of blue, in general the deco turned out really nice, doing some neat things that aren't quite obvious without transforming the toy, and generally just working as much as it can to distinguish from the mold's previous use.

If you find yourself pondering your first copy of this mold and trying to decide between Thundercracker or tracking down a Starscream, Thundercracker has a really good feel when you interact with the toy and the different plastic tolerances have corrected for minor issues Starscream has. But Thundercracker may leave you wanting for paint in some areas. Starscream has what I'd call a more finished deco, and even if it does not comparatively excel in build quality, it does everything "good enough". You really can't lose either way you go, but since function matters a little more to me I'd give the nod to Thundercracker.

In either case this toy is Excellent on the Figurereviews.com Non-Numeric Scale, and a more than capable replacement for the Generations Thundercracker from 2011. Which I sold at the first opportunity when I knew this one was coming. I am ready to have a collection free of the old Classics seeker body. So seriously Hasbro, how about new toys for Dirge, Thrust and Ramjet? And a new Acid Storm would be groovy too so I can do away with all the old seeker toys. Just give me more recolors of this mold.