Megatron reclaims control of the Decepticons while Optimus Prime rallies the Autobots to deal with a rampaging Trypticon- but do the Autobots have enough weaponry left to deal with a foe that even Metroplex couldn't destroy? The final print issue of Monstrosity covers three chapters of the digital comic written by Chris Metzen and Flint Dille with art by Livio Ramondelli and lettering by Tom B. Long. 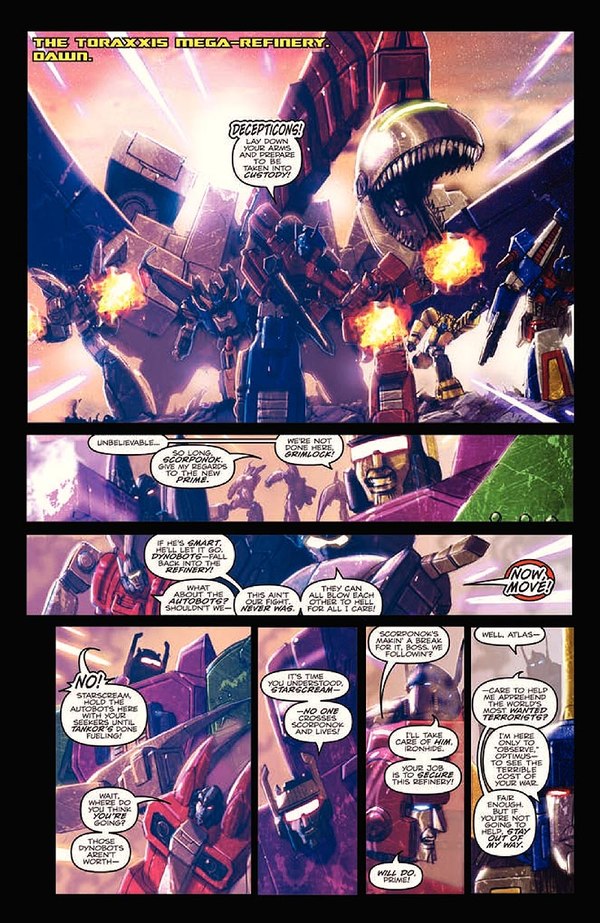 At posting time, we were only given sample images for digital issue #4, as collected in print edition #2. But the book is consistent, so if you like this then #4 should be right up your alley.

Overcome with self-doubt, Optimus Prime speaks to Alpha Trion in his quarters, blaming himself for the outcome of the war. Trion tells him that sometimes a leader is supposed to lead towards self-determination, not to make all the decisions himself. But there's no time for that, as the "dragon" is awake and smashing its way across Cybertron. Prime asks Metroplex for help and learns of the monster's history and name: Trypticon. But Metroplex needs Energon, badly, and is unable to transform- so the Autobots must go it alone. As Scorponok revels in the sight of Trypticon's destructive capabilities, Starscream summons him to the main hall. Megatron is home!

That's about the first third of the book- the rest is of course given over to the attempts to stop Trypticon. Considering the rest of IDW's Transformers titles aren't entirely about those who escaped Cybertron and/or Trypticon's wacky romps across the surface of a dead world, you can probably guess that he gets stopped. But by who and how are usually more interesting than just hearing the outcome, and that remains true here. After he deals with Scorponok Megatron gets some pretty decent scenes elsewhere in the book, and proves that he is not a complete monster, still capable of some insight and rational thought. More rational thought than Scorponok seemed to be at least. On the other hand Optimus Prime struggles throughout the book with doubt, as any leader doubtless would- or should -when faced with a fleeing populace, dwindling resources, and a monster beyond his greatest military asset's ability to destroy... with that asset not usable. The story doesn't particularly end in a good place for Prime, which lends credence to the idea that "Primacy" will be the next of the Dille/Metzen/Ramondelli series. It's not a place I'd leave off if I knew I was leaving off for good, I'll put it that way.

The creative staff remains largely consistent relative to the previous issues. Metzen and Dille's dialogue is not bad but the characters don't seem as distinctive as they could be. They're also back to Transformers: The Movie references, which are definitely at the "recycled work" density as opposed to nostalgia when you look at the series as a whole. Livio Ramondelli's artwork remains roughly constructed with a lush painted finish, though in this issue some of the darker, lower-contrast panels are fairly difficult to follow as well. I don't want to belabor the point any more than I have, but let me just say that I would love to see Ramondelli refine his character designs and Dreamwave draftsmanship, because his painting skills coupled with sharper underlying art could well be stunning.

In the end, Monstrosity feels like a middle chapter of a larger story. Which, being set in the Transformers' distant past, it kind of has to. The war will go on, and the Autobots and Decepticons will battle again. And again. But beyond the realities of doing a prolonged backstory, it does seem to be pointing towards a third serial, as I said. The conclusion taken on its own feels a bit empty in a way, not abrupt but not a particularly satisfying stopping point either.